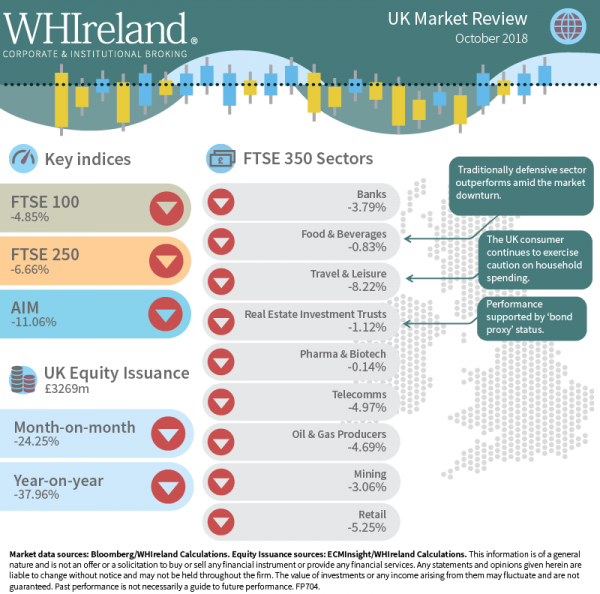 October saw UK equity markets getting pummelled amid a global risk sell-off, prompted by rising fears of higher interest rates, a US-China trade war and slowing global growth. The Uk top 100 and UK 250 mid-cap ended the month down 4.85% and 6.66% respectively, while evaporating liquidity helped AIM to a 11.06% monthly loss. The sharp headline declines obscured a few patches of relative resilience, with defensive sectors such as Pharmaceuticals & Biotechnology and Food & Beverages limiting monthly losses to 0.14% and 0.83% respectively. Bond proxy REITS also contained declines of 1.12%. However, most cyclical sectors were punished heavily.

UK economic data over the month suggested that growth has moderated over the course of the current quarter, while wage inflation data has been somewhat firmer. Nevertheless, expectations of a UK rate rise fell during October. The month was capped by a 2018 Budget that was surprisingly expansionary and arguably the most radical seen since the financial crisis.

Given market conditions, it is unsurprising that the equity issuance momentum generated in September from summer lows was not maintained through October. Activity was down sharply on both a month-on-month and year-on-year basis, with deal-making highly concentrated in the banking, financial services and equity investment funds sectors.

October saw markets suffer a global risk selloff, ostensibly prompted by growing concerns over the prospect of rising interest rates, an escalation of the US-China trade war and slowing global growth. It is notable however, that both earnings and economic consensus forecasts for 2018-19 have remained solid. UK equity participated fully this market decline, with the Uk top 100 and UK 250 mid-cap ending the month down 4.85% and 6.66% respectively, while evaporating market liquidity helped AIM to a 11.06% monthly loss.

Amid these steep declines, there were relatively few areas of true resilience at the sectoral level. The traditionally defensive UK top 350 Food & Beverages sector managed to limit the month’s losses to 0.83%, while ‘defensive growth’ such as the UK top 350 Pharmaceuticals & Biotechnology sector fell by just 0.14%.

Elsewhere, losses were more severe, with cyclical and economically-sensitive sector receiving particular punishment. Travel & Leisure performed very poorly, down 8.22% on the month, while Retail fell by 5.25%.

Most sector heavyweights were likewise put under pressure. Oil & Gas stocks succumbed to profit-taking (-4.69%) following the recent strong run, as it became clear that the supply shock from US-led sanctions on Iran would not tighten the crude market as much as expected. Mining stocks also booked a loss of 3.06%, reversing their tentative September rally, no doubt unsettled by the prospect of a slowdown in China’s economy. Uk top 350 banks posted a 3.79% decline against a flattening yield curve, although the Q3 results posted by the major UK banks generally exceeded expectations.

The UK economy continued to evidence resilience, but on balance the more forward-looking indicators suggested some loss of momentum in the current quarter, possibly related to ongoing Brexit uncertainty. Households appear to be an area of vulnerability, with consumer credit, consumer confidence and retail sales data all disappointing. Elsewhere data was more mixed, with construction activity being weaker, industrial and manufacturing data being stronger than expected and the services sector performing in line. Labour market momentum continued to slow, but overall the job market remains buoyant.

Inflation data was mixed during the month, with higher than expected producer prices and wages, and lower than expected consumer and prices. House price data suggested renewed weakness. Market expectations of a 0.25% rate rise from the Bank of England by May 2019 fell from c. 60% to c. 40% amid rallying global bond markets.

October also saw an unexpectedly expansionary 2018 Budget with a net injection of £103bn over the five-year forecast period. Some 95% of this amount is due to higher planned spending, with the balance being tax cuts. Approximately 85% of the additional spend is to be applied to the NHS. However, the Chancellor warned that such measures may need to be radically revised should Brexit negotiations falter.

Amid the broad market decline, October’s UK equity issuance fell sharply from the September bounce, reaching £3,269m and representing a 24.25%% decline month-on–month and a 37.96% fall on October 2017. The deal count increased slightly from the previous month (35 vs. 33), but was well down on the 48 deals seen a year ago.

At the sectoral level, activity was heavily concentrated in the banking, financial services and equity investment funds sectors, accounting for 21.51%, 19.14% and 24.45% of total issuance respectively. Within this, the privatisation of Nova Ljubljanska Banka was a particularly notable transaction.

Overall activity broadened somewhat, with a total of 18 sectors being represented within the October deal count, up from 14 in September, but down from the 21 sectors represented in October 2017. In addition to the active sectors already noted, Travel & Leisure and Industrial Metals & Mining each accounted for more than 10% of October’s activity by value.