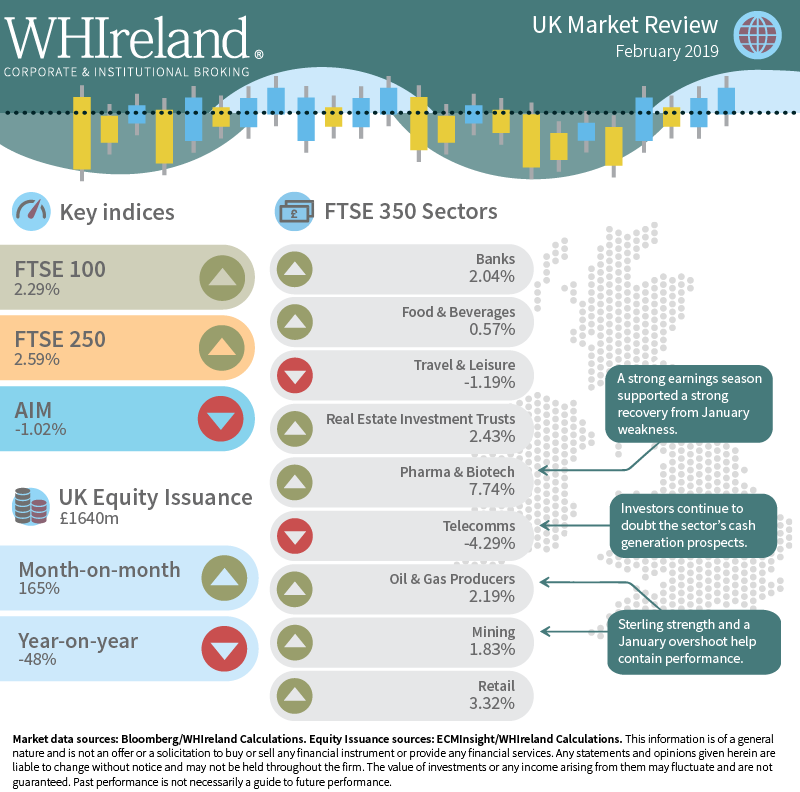 February saw a continuation of the market risk rally seen in January with dovish central banks and geopolitical tensions – centered on Brexit and US/China trade – appearing to recede. The Uk top 100 and UK 250 mid-cap ended the month up 2.29% and 2.59% respectively, though AIM managed to buck the bullish trend with a decline of 1.02%.

At the sectoral level UK equities once again posted broad-based gains, though Telecomms was a notable exception to the market recovery. Pharmaceuticals managed to reverse January’s significant underperformance, boosted by strong earnings reports.

UK economic data over the course of February marginally disappointed downwardly-revised expectations. However, the Bank of England continued to signal supportive monetary policy, while strong public finances suggested scope for additional fiscal support. Sterling had a mixed month, though ended stronger, as it largely tracked UK political developments related to Brexit. Market consensus continues to move in favour of both a delayed and ‘softer’ EU departure.

UK equity issuance continued to make progress from its December low. However overall momentum and breadth remained rather poor despite the risk rally in secondary markets. Issuance totaled £1640m, representing a 165% rise month-on-month, but a 48% decline year-on-year.

UK markets continued to benefit from a global risk appetite recovery in February, though market momentum appear to slow towards the end of the month. The US Federal Reserve maintained the dovish stance it adopted in January, while the Bank of England (BoE) indicated it would be supportive of the UK economy in the event of a ‘hard’ Brexit.

Developments in the UK Parliament introduced an element of volatility across domestic markets, with the net result over the month being to reduce the market’s perception of an imminent ‘hard Brexit’. This in turn contributed to a somewhat volatile, though ultimately positive, performance from sterling and better support for more domestically-orientated UK equities. The Uk top 100 and UK 250 mid-cap ended the month up 2.29% and 2.59% respectively. AIM managed to buck the bullish trend with a decline of 1.02%., perhaps suggesting a continued investor aversion for less liquid exposures.

At the sectoral level, continued market re-risking helped most to a monthly gain although, as in January, a few managed to buck the positive trend. As might be expected, defensive sectors such as Food & Beverages did relatively poorly in this environment (+0.57%), though once again it was Telecomms that proved the most notable under-performer on the month falling by 4.29%. The sector remains squeezed between a ramp–up in 5G network spend and intense price competition in some areas.

The strength of the Pound also helped the commodity-based ‘sterling hedge’ sectors deliver a degree of underperformance, though arguably these had already run ahead of development in underlying markets. Accordingly the Oil & Gas and Mining sectors delivered monthly gains of 2.19% and 1.83% respectively.

In contrast, the domestically-orientated UK Retail and Real Estate Investment Trust (REIT) sectors managed to build upon their spectacular January performances with further gains of 3.32% and 2.43% respectively. As in January, the Travel & Leisure sector refused to follow suit following earnings weakness and actually posted a February loss of 1.19%. In contrast a better than expected earnings season for Pharmaceuticals helped the sector to a market-leading 7.74% gain, following a January pullback.

Incoming economic data in February confirmed that the UK economy slowed sharply in the final quarter of 2018, with the breakdown suggesting a drag from net exports and investment and support from public spending. Private consumption appeared to be relatively resilient. More forward-looking indicators such as Purchasing Managers Indices (PMIs) uniformly disappointed (for Services, Manufacturing and Construction), suggesting little scope for near-term re-acceleration, though retail sales data for January suggested a decent recovery from December weakness. The UK labour market also appeared resilient, though survey data suggested that full-time positions had actually declined.

Weighed against this, a broad swathe of UK inflation data also continued to come in below expectations. Accordingly, the BoE cut its forecasts for both growth and inflation for 2019 at the Bank’s rate-setting meeting in February. In evidence to the Treasury Select Committee, Governor Carney acknowledged that a ‘hard Brexit’ scenario was unlikely to prompt an interest rate increase, as previously suggested. February also saw UK public finances register the biggest monthly surplus (for January) since records began in 1993, suggesting that the Chancellor is in a position to re-affirm the higher public spending announced in the most recent Budget, at the Spring Statement on 13 March. Taken together, there appears to be scope for policy-makers to mitigate downside risks to UK economic performance.

UK equity issuance continued to make progress in February from the previous month’s depressed levels. However, market breadth appeared to be relatively poor, despite investors taking a more constructive view on Brexit and some further recovery in global risk markets. Issuance totaled £1640m, representing a 165% rise month on month, but a 48% decline year on year. February saw the deal count increase to 19 from the 16 registered in January while sectoral representation also edged up to 12 from 11. However, this compared unfavourably from 33 and 18 respectively seen in February 2018. Moreover over half of the month’s deal by value was accounted for by just two transactions. Equity Investment Instruments, Software & Computer Services offerings together accounted for more than 89% of total issuance.