Performance at a glance 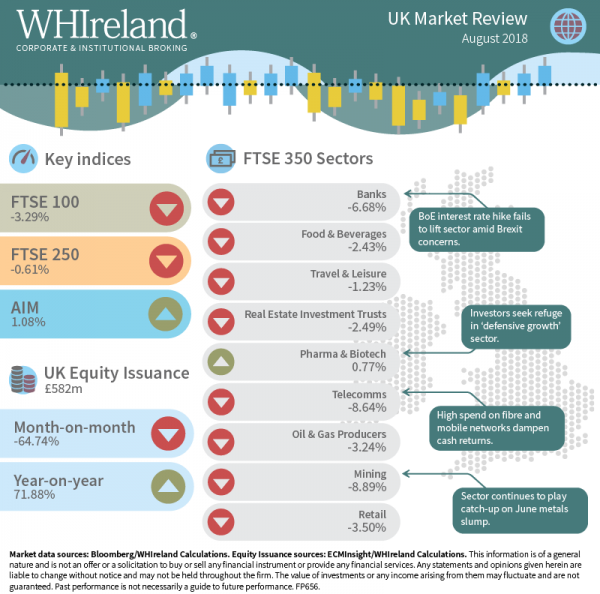 UK equity markets struggled in August with the Uk top 100 and UK 250 mid-cap posting losses of 3.29% and 0.61% respectively, though AIM managed to eke out a gain of 1.08%. Rising international trade tensions and Brexit-related uncertainty have clearly raised headwinds for risk asset performance. Earnings momentum also appears to have slowed towards the end of the month.

The UK economy continues to turn in a resilient performance, though more forward-looking indicators suggest some softness ahead.

August is traditionally the slowest month of the year for equity issuance and 2018 was no exception, though activity still rose on August 2017. Investors continue to evidence caution under somewhat fragile market conditions.

UK markets struggled in August, putting in its weakest performance of the year since February and underperforming most major markets. The Uk top 100 and UK 250 mid-cap posted total returns of -3.29% and -0.61% respectively. Bucking the trend, individual growth stories helped AIM post a monthly gain of 1.08%. Losses were seen in most sectors as a combination of renewed Brexit angst and rising international trade tensions weighed on investor sentiment.

Mining stocks suffered again as metals pricing failed to recover from June’s slump on growing fears of a global trade war. The sector ended the  month down 8.89%. Oil & gas producers limited losses to 3.24% on the prospect of tighter supply from Iran and Venezuela.

Despite the Bank of England delivering a 0.25% increase in interest rates on the 2 August, UK banks fell sharply amidst renewed fears of a ‘hard Brexit’. The sector ended August down 6.68%.

Telcos also resumed their downward track in August, falling by 8.64% to a five-year low. Investors continue to fret at the prospect of higher spending on fibre and mobile networks and intense competition, compromising cash flow and dividends.

Pharmaceuticals was one of the few large UK sectors which managed to post a gain (0.77%) on the month, as investors sought refuge in ‘defensive growth’. Other sectors such as Retail (-3.50%), REITS (-2.49%) and Food & Beverages (-2.43%) were more indicative of market performance.

The UK economy continued to show resilience on the basis on incoming data in August and confirmed that GDP growth had accelerated to 0.4% in 2Q 2018. However, it appears that contributions from net trade and private consumption remain somewhat disappointing, whilst industrial and manufacturing production, construction and house prices have all exceeded expectations.

The most recent data suggest that the buoyant UK job market has started to cool and wages were marginally softer than expected. Consumer confidence has weakened, though warm weather appears to have supported retail sales activity. The more forward-looking PMI data suggests that economic momentum slowed again in August.

The Bank of England (BoE) delivered a 0.25% interest rate increase on 2 August as expected. However, their caution of the outcome of the ongoing Brexit negotiations left expectations of future rate increases marginally lower. In a similar vein, sterling lost ground for most of August, but recovered most of these losses by month-end.

UK equity issuance was predictably low in August, amounting to just £582m. While this was a 64.74% decline on the previous month, this still represented a 71.88% increase on a dismal August 2017. Consistent with this seasonal pattern, the deal count fell to 12, from 32 in July, but up from just 9 in the previous year.

As expected, the sector count also declined significantly in August, from 32 to just 10. Activity was concentrated in the beverages, real estate investment & services, healthcare equipment & services, household goods & home construction and general retail sectors. In aggregate, these sectors accounted for some 87% of total deal activity.

Overall it appears that underlying UK capital market momentum is weak, reflecting both heightened investor sensitivity to risk and greater selectivity on valuations.