Posted on 10 May 2019 by Michael Ingram Chief Market Strategist 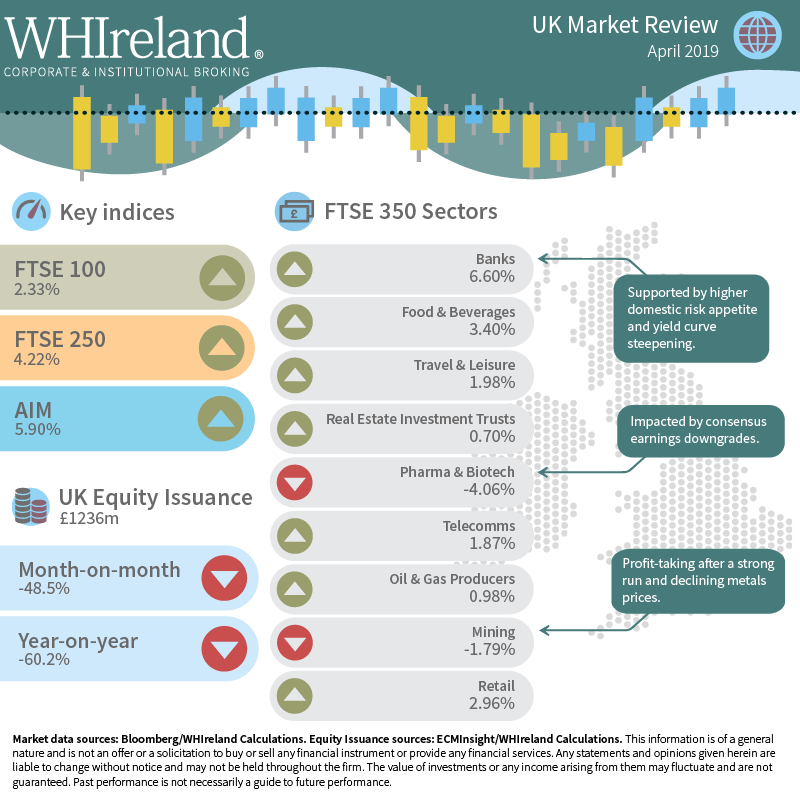 Global equities made further progress in April, buoyed by a solid start to the US earnings season, continued central bank dovishness and the perception of receding geopolitical risk. In the UK, further delays to Brexit also prompted investors to take a more constructive view on domestic risk assets. Sterling was volatile, though ultimately little changed on the month, while Gilts suffered significant losses. The Uk top 100, 250 mid-cap and AIM indices posted total returns of 2.33%, 4.22% and 5.90% in April.

Incoming UK economic data in April painted a mixed picture on growth and economists continue to cut their full-year forecasts. Broad inflationary pressure currently appears contained. However with the timetable for Brexit again delayed, market expectations of a prudential rise in UK rates from the Bank of England (BoE) are now building.

UK equity issue failed to build on the momentum evidenced in March and amounted to just £1236m in April. This represents a decline of 48.5% month on month and – crucially – a 60.2% fall year on year. Investors appear content to add to existing risk positions, but are still exercising caution towards new exposures. This perhaps goes some way to explaining the current disconnect between weak primary and strong secondary markets, though traded volumes in the latter also appear depressed.

UK equities were supported by a number of factors over the course of April. Global central banks have continued to sound a more cautious outlook on interest rates, and markets now seem reasonably confident that we are at the peak of the US rate cycle. US/China trade talks also appear to be slowly moving towards a resolution. Meanwhile, the unfolding US earnings season, while revealing a few high-profile misses, has thus far exceeded analysts’  expectations overall.

In the UK itself, the deadline for Brexit was postponed – again – until 31 October. Despite considerable uncertainty around the eventual outcome, investors’ current working assumption is that the probability of a ‘hard’ Brexit is low.

Against this backdrop, UK equity indices posted healthy gains in April, with a preference for UK domestic exposure. Accordingly, the Uk top 100, 250 mid-cap and AIM indices posted gains of 2.33%, 4.22% and 5.90% respectively.

Unsurprisingly, UK banks led the charge in April, also aided by a steeper UK yield curve. Although the sector seems largely ex-growth, the prospects for the return of excess capital appear to be improving. The Uk top 350 banks ended the month up 6.60%.

The quoted UK Retail sector also performed well last month (+2.96%), continuing its strong year-to-date recovery from December’s plunge. This was however bettered by the performance of the Food & Beverages sector, which rose 3.40% on the month.

The Mining sector succumbed to profit-taking in April (-1.79%), after a stellar performance in March and perhaps prompted by a decline in industrial metal prices during the month. Pharmaceuticals also struggled (-4.06%), with the ‘defensive growth’ investment thesis coming under pressure from analysts’ forecast downgrades.

Overall, incoming economic data in April was quite mixed and economists continue to cut consensus growth forecasts for 2019 as a whole. The most recent GDP data (for February) suggests that the UK economy remains on track to grow 0.2% quarter on quarter. PMIs painted a mixed picture with a stronger than expected pickup in Manufacturing, but unexpected weakness in the heavyweight Services sector. Overall the PMI data disappointed, perhaps impacted by last minute jitters over a ‘hard’ Brexit. Business and consumer surveys suggest that confidence levels remain fragile. Retail sales and car registration data received in April were both weak. The UK labour market appears to have lost some momentum, but overall net gains remain robust.

Both consumer and retail price inflation data received during the month came in lower than expected, while producer price inflation was broadly in-line. However, wage inflation confirmed an accelerating trend and remains a focus for the Bank of England (BoE). With the deadline for Brexit now notionally pushed out to 31 October, the BoE appears increasingly unwilling to be a hostage to fortune and the market is pricing in an increased probability of a rate hike by year end.

UK equity issue failed to build on the momentum evidenced in March and amounted to just £1236m in April. This represents a decline of 48.5% month on month and – crucially – a 60.2% fall year on year. Investors appear content to add to existing risk positions, but are still exercising caution towards new exposures.