Despite being known for its defensive qualities, Utilities were the worst performing sector in the UK top 350 for the three months to the 30th of June.

The weighted return for the sector was a fall of 9.3%, while water utilities were down 14.1%. Volatility was the culmination of two factors: interest rate expectations and regulatory uncertainty.

In the second quarter of 2017 the Federal Reserve increased interest rates as expected for the second time this year. They were shortly followed by the Bank of England rate decision where rates remain unchanged, but where the vote was closer to a rate rise than expected. The debt levels for utilities are at the high end of recent history and would cost more to service should interest rates rise. Higher interest costs would lead to lower profits to distribute to investors. With bond yields so low, buying utilities has been attractive for income investors. If the rising debt outweighed the ability to service it, capital value could be eroded.

Predictable earnings have been a key defensive feature of the sector, but the political environment has put this into question with greater competition and price transparency becoming key topics.
However, regulatory intervention for the energy industry has subsided in the short term. The prospect of a price cap has diminished as the proposal by the regulator OFGEM was diluted to focus on protecting the most vulnerable customers. The next water utility regulatory review is in 2019 and could also see greater scrutiny on price controls, while the costs of meeting operational requirements are rising. 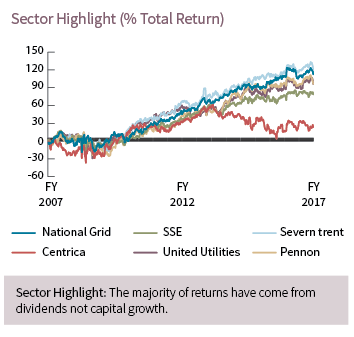 The industry faces a squeeze between demonstrating value to the consumer and investing for the future to ensure a reliable water and energy supply. This would suggest earnings may not be so defensive. New investors may feel the risks are increasing and income does not compensate the immediate challenges ahead. At the same time, income is hard to come by. Existing holders may be loath to sell, particularly if the industry continues to commit to growing dividends in line with inflation. In the end, investors must take their individual case into consideration; do the rewards compensate for the risks to capital?