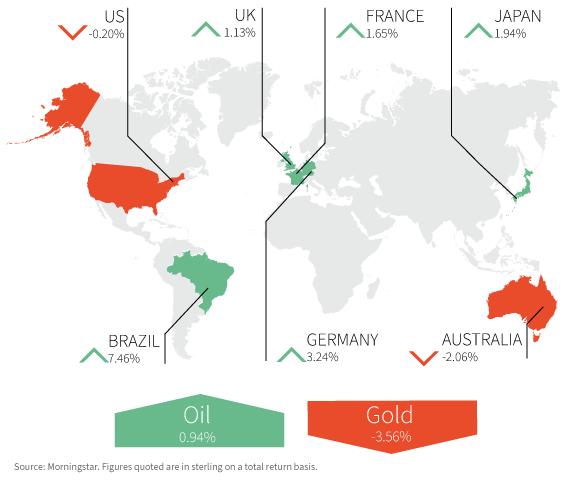 May was a mixed month for markets that ended with little deviation in most major indices. However, it was not without incident. Monetary tightening continued in the US and Europe as Central Bankers warned of the impending effects of inflation, including a prediction of “apocalyptic” food price rises from Bank of England Governor Andrew Bailey.

Forecasts of a further energy price cap increase in the UK led the government to provide fiscal stimulus equivalent to around 0.5% of output, which should help buffer some, if not all of the impact on the most vulnerable consumers.

Bond yields in the US fell substantially, although recovered somewhat in the final trading days as growth, rather than the rate of inflation, has begun to be questioned. There were signs in the US and Europe that consumers were beginning to feel the pinch of rising costs of energy and food.

On the other hand, Chinese markets began to pick up as Covid cases rolled over and the Government stepped in to support several parts of the economy through interest rate cuts and targeted stimulus measures.

This was an unusual month for Government Bonds in that the normally trendsetting US Government bond market experienced a meaningful fall in ten year bond yields whilst those in the UK, Europe and Asia (with the exception of Japan) saw a significant rise in yields.

In the west, high yield bonds underperformed their Government counterparts with the exception of the UK where both types performed poorly in absolute terms.

The fall in US yields is a reflection that the economy there may not, after all, escape the severe economic slowdown that had already been predicted to afflict Europe and the UK.

Emerging Market Bonds did well as inflation is not as pronounced there, in general, so the policy response is likely to be less draconian.

Indeed China accelerated plans to boost the economy and cut mortgage rates by more than anticipated.

The extent and duration of economic downturns has for now replaced inflation fears as investor worry number one.

We doubt the downturn will be very long or very deep.

It was deja vu in the UK market as the large cap index rose a little, outperforming the mid cap index which fell but by less than the small cap index.

Once again the larger exposure to oil and mining companies helped the large cap index, as did activist shareholder interest in Unilever.

Meanwhile worries over the domestic UK economy negatively impacted the other two indices, not helped by a Bank of England interest rate increase and forecast that warned of both 10% inflation and a recession!

Sentiment was further impacted by a prediction of another rise in heating bills to £2,800 in autumn and a composite measure of economic activity hitting a fifteen month low. On the plus side both Retail Sales and Consumer Credit numbers beat expectations whilst the Chancellor did announce measures to offset some of the cost of living cost increases, particularly for those most in need.

Many domestic shares appear very cheap and must be a good way along the road to discounting a severe slowdown, if not deep recession.

We are looking to add to such companies on further share price weakness.

Shares of European companies were broadly flat in May, however there was a great deal of divergence within this. Old economy sectors like oil and gas continued to outperform as their commodity prices rose, while out of favour technology was a clear laggard.

With the conflict in Ukraine rolling into its fourth month, the attention of investor’s remains firmly fixed on its knock-on effects, particularly inflation. During the month several key nations recorded figures that outpaced expectations, including Germany, Spain and France. While we may be close to a peak in US inflation, it is likely that Europe will not see such an event until later on in the year, putting continued pressure on consumers.

One key positive during the month was an improvement in the outlook for China – one of Europe’s major trading partners. Its largest city Shanghai has finally begun to relax Covid-19 restrictions and the government has pledged a large degree of support to help the economy, which should prove to be a net positive for Europe.

The main US index fell briefly into technical bear market (down 20% peak to trough) territory during May before recovering to end the month roughly flat. The technology index fared worse however, ending down around 3.5% as concerns mounted about slowing growth and elevated inflation.

The Federal Reserve began the month by hiking interest rates 50 basis points, the largest one-month rise since 2000, as they look to reign in price increases which have begun to be felt by consumers. Weak earnings reports in the month from large consumer facing companies such as Walmart did little to quell fears of a slowdown. Neither did economic data releases that revealed a softening in durable goods orders and the steepest fall in New Home sales since 2013.

Retail Sales did provide some hope that US consumer strength remains robust as they continued to grow at a solid pace. We continue to expect spending on Covid beneficiaries such as home improvement and technology to be worst affected as incomes are further squeezed by inflation.

China was the star performer in the region in May as shares there rose mid single digits in response to an easing of Covid-19 restrictions and more pronounced support for the economy from the Central Bank and Government alike.

Japanese equities eked out a small gain as the economy continued to re-open, albeit in an uneven manner with susceptibility to supply chain problems remaining.

Thailand and Singapore also rose but recent favourites India and Vietnam fell, as did Australia and New Zealand.

Continued re-opening and ongoing economic policy support should underpin both China and Japan from here, at the very least in relative terms. Other markets will be influenced by their own interest rate cycle and commodity exposures but most countries in the region have less pronounced issues on prices than the West, thus giving some comfort to investors.

Recession became the buzzword in markets during May, with increasing concerns that this may be the direction in which the US economy is heading. This was clearly evident in commodity markets, with those heavily driven by demand seeing an easing of prices, while those more tied into supply bottlenecks continued to appreciate. As an example, Copper prices fell across the month, while agricultural commodities continued to appreciate.

A sharp increase in mortgage rates has yet to feed through to house prices in the UK, with May seeing another big increase that beat analyst expectations. One major index saw prices rise 0.9% during the month, equating to an annual increase of more than 11%.

However, the shares of listed property companies fared poorly during the month, in particular those with exposure to industrial assets. The main driver of this was weaker guidance from Amazon, who suggested that they may have significant excess capacity in some of their warehouses.