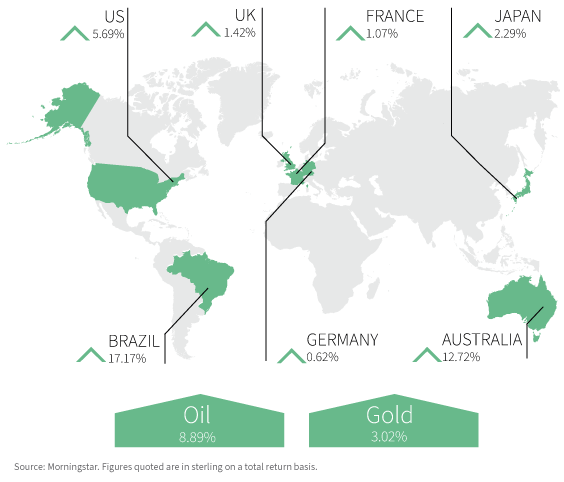 The war in Ukraine has unfortunately again dominated headlines over the month. An elongated conflict in Eastern Europe has raised the risk of recession as consumer incomes are squeezed by commodity price appreciation.

Despite the noise, US equity volatility actually fell back towards its long term average during the month as most major markets eked out modest gains.

However, performance diverged at a more granular level. Increasingly, cyclical companies have priced in a slowdown in growth and beneficiaries of the stagflation narrative last year have led the way once again this month.

In the East, volatility remained abundant. Hong Kong stocks fell over 15% in two days during the month only to rebound strongly as the Chinese government addressed regulatory concerns in technology and property, and promised to support the economy.

Bond yields fell then climbed sharply before rising again to leave investors with moderate monthly losses in Fixed Income as the Federal Reserve enacted its first interest rate hike since 2018.

Investors in both government and corporate bonds experienced another wild ride in the month as yields collapsed early on in response to the deteriorating situation in Ukraine. Then as Central Banks indicated more forcefully they were going to raise interest rates and tighten policy despite the war, yields rose to their highest levels since 2019. Finally, in the latter part of the month, as murmurs of a potential peace deal emerged and investors considered the impact of high prices on economic activity, yields fell back again. However, the net of all these gyrations was that investors lost money over the period.

For decades now, many investors become afraid when the yield on 2 year US Government Bonds exceeds the yield on 10 Year US Government Bonds. This is because such a phenomenon has been a very good (if not very timely) warning that a recession will emerge within two years. This briefly occurred during the month and was another source of investor angst. However, given the massive intervention in bond markets by Central Banks, no one is sure whether this signal will be as accurate as it usually is.

Going forward things are finely balanced in that yields are still very low compared to inflation but it is likely inflation is in the process of peaking, albeit at a much higher level than anticipated. Furthermore, despite pent up demand for services, high consumer savings and supportive fiscal policy there is no doubt many consumers will need to divert discretionary spending into fuel and power purchases. This will dampen some parts of the economy. Lastly, developments in Ukraine will also influence consumer and corporate confidence so there is a wider range of outcomes than normal that investors need to consider.

This will ensure volatility continues. We will take advantage of such as and when we consider it appropriate to do so.

British large cap shares led as they and mid cap equities eked out a small advance over the month. Small cap shares were flattish as their run of underperformance continued. The Berenberg strategist reckons that the recent run of underperformance of mid-caps is now as severe as during both the Great Financial Crisis and post the 2016 Brexit vote. This is occurring as investors are clearly fretting about the impact of simultaneous cost of living increases and interest rate rises on consumer expenditures.

Weakness of the pound versus the dollar added further to the allure of international earners. Many retailers and house builders are now more than 20% off of their highs and opportunities are beginning to emerge unless one believes a protracted period of stagflation is upon us instead of a one off step function up in prices. We think the worst of the pain is already behind us and that by year end inflation will drop back to the ‘new normal’ of around 3%. This should enable strong companies in beaten down sectors to stage a comeback later this year.

The end of March marked the fifth full week of conflict in Ukraine, which has had a profound impact on financial markets, both in Europe and beyond. The initial selloff in European equities was severe, but more constructive dialogue with regards to a potential peace deal allowed for a degree of recovery throughout March.  In line with this, it was the companies who had suffered the most in the prior month that rebounded strongest (small-caps), gaining close to 5% in local currency terms.

As discussed in February, the most significant impact for wider Europe is what the crisis means for inflation, given the impact on commodities. Within the month, forecasts across the continent were revised significantly higher here, while many countries recorded month-on-month increases which overshot expectations. As an example, Germany saw a one-month increase in the general price level of 2.5%, while Spain was higher still at 3%.

This poses a significant dilemma for the European Central Bank, which will now be under increased pressure to act to control this inflation, at the same time that a rising cost of living weighs on economic activity. The market now expects six interest rates hikes of ten basis points, all occurring before the end of the year, compared with two hikes priced in just one month earlier. For that reason, there is now an elevated probability of recession in Europe should the conflict drag on further.

US markets shrugged off several headwinds in March to lead the way upwards for equity markets. In general economic numbers were fairly robust, as housing and jobs continued to be strong. Weakness however, was beginning to be felt at the consumer level as confidence fell while retail sales and durable goods were softer than anticipated.

Although headwinds remained as the Russian invasion of Ukraine raged on, bond yields moved higher and the Fed pushed on with rate hikes as inflation continued to be pronounced. Ominously the US yield curve even inverted in several places, including the 5yr-30yr for the first time since 2006, reinforcing recessionary fears.

The US has been considered best insulated from the war in Russia and it continued to benefit from its safe haven status. Following a difficult start to the year technology companies rebounded, leading indices as stagflation again was the narrative of choice.

Politically, the chances of Biden losing both the House and the Senate in the mid-terms later in the year appear high after another high profile gaff in an off-the-cuff comment about ‘regime change’ in Russia.

With the notable exceptions of China and Hong Kong, most Asian markets participated in the equity market rally that surprised many investors during the month. China and Hong Kong remained caught in the crosshairs of both pandemic related lockdowns and further regulatory threats, as well as ongoing concerns about the property sector. Late in the month there was some good news in that infection rates in Shanghai seem to be peaking. Chinese authorities are continuing to ease monetary policy and supply the economy with more liquidity. Such measures will aid the recovery as the latest pandemic wave subsides.

Japan was another strongly performing market as investors focussed on easing restrictions rather than the slew of pandemic-related weak economic statistics.

Indian equities fully participated in the equity rally despite being a big importer of oil.

The outlook for Asia is somewhat dependent on the West avoiding a full scale recession but with China continuing to ease and many other Asian countries nearing the end of both lockdowns and their own tightening cycles, there are a lot of positives for the medium term.

Market volatility steadily decreased in March, albeit from a very elevated starting point. Absolute return funds have broadly struggled year to date, but clawed back some performance throughout the month as global equities rose.

One of the main beneficiaries of the surge in energy prices has been renewables companies, who have seen their unhedged power price exposure deliver a boost to net asset value during the month. As such, this sector delivered solid performance in March.

Within commodities, oil prices finished close to where they started, having surged as high as $120 per barrel intra-month.

UK house price appreciation continued in March as surveys showed continued strength. One index showed that prices increased at the fastest rate for 17 years in March, over 14% in the prior 12 months. Another saw the largest monthly increase in house prices since 2004, as they jumped 1.7% above February’s levels.

We continue to believe that UK housing is structurally undersupplied but that the pace of price appreciation is unlikely to continue throughout this year as consumer incomes are squeezed and service demand begins to lead the way in the summer.