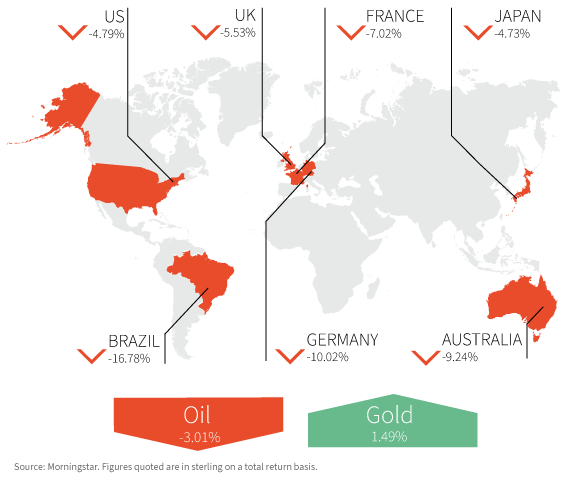 June was another harrowing month for financial markets. Bonds fell and most equity markets declined mid-single digits. Peak inflation fear was compounded by the threat of recession to give investors plenty to worry about. China was the only market that offered any ray of hope as the Government announced stimulus measures to reignite the economy following its lockdown-induced slowdown.

Investors witnessed a sea change in Central Bank actions to bring inflation back under control led by Fed Chair J Powell who announced his “unconditional” commitment to reining in inflation. Thus implying that knock-on economic effects will be ignored when contemplating further rate hikes.

Core inflation however, does appear to have rolled over in the US and UK which may signal the beginning of the end for overly hawkish central bank policy.

Fears of rising inflation and oncoming recessions have led to a de-rating in markets so far this year. However, company earnings expectations have continued to rise. We would expect this run to end in the upcoming months and have focussed our attention on quality companies with pricing power at affordable valuations. These stocks are likely to be best insulated from earnings declines.

The worst first half of a year for at least 50 years for US government bonds was confirmed at the end of June. Both duration and credit have been affected with the former going first and then recession fears impacting the latter.

The Federal Reserve carried out their largest single rate increase since 1994, hiking by 75 basis points, whereas the UK increased interest rates for the fifth consecutive meeting in June. Markets are now pricing further hikes to 2% and 3% by year end in the UK and US respectively.

In both economies headline inflation continued to rise at the highest level for 40 years, although core inflation, a more “sticky” measure of inflation began to roll over. This could be an indication that we have reached peak levels of inflation fear in the West

In Europe, the European Central Bank is set to raise interest rates for the first time in 11 years as it too aims to rein in inflation towards its 2% target.

It was a tough month for UK stocks, with falls across the board but once again defined by small and mid-cap underperformance. They have now underperformed their larger brethren by around 20% this year. This puts them in line with other markets such as the US that have flirted with bear market territory and have also trailed UK large caps. We benefited on a relative basis from being overweight UK equities and continue to hold the position given the strong dividend yields and affordable valuations on offer.

On the economic front, many now believe the UK is in the midst of a recession and that is increasingly reflected in the economic data. The cost of living squeeze has plunged consumer confidence to an all-time low, house price increases have slowed and job vacancies declined towards the end of June.

Sterling again weakened on the back of a worsening current account balance and fears over the Northern Ireland protocol. This has boosted the attractiveness of domestic UK stocks and we are continuing to look for buying opportunities.

Like other developed markets European shares declined in June as economic data faltered and the war in Ukraine waged on.

Activity indices were weaker than expected and fell to levels close to contraction and typically consistent with earnings declines. Manufacturing performance declined for the first time in two years, with Germany and France experiencing the weakest factory growth. Services also began to struggle as inflationary pressures reduced demand. Overall, many believe the EU is already in a recession.

In political news, the EU is considering Ukraine for membership whilst Croatia will be joining the bloc in January 2023. Finland and Sweden have also stepped closer to NATO membership.

A more surprising tale of the month has been the performance of the Russian Ruble. Despite the ongoing conflict in Ukraine and having defaulted on external sovereign debt for the first time since 1918, it has climbed to a 7 year high and is now the best performing currency globally this year, up around 45%.

The fed is now the most aggressive central bank and this has troubled investors who had come to consider the US impervious to economic crises elsewhere, be it Europe, Africa, Latin America or Asia.

The reaction to the Fed’s unequivocal commentary during the month was for bond yields to rise and both large cap and technology indices to decline, both down in the high single digits and both in a bear market for at least a short period of time.

Weak consumer confidence numbers published late in the month did little to quell fears that a recession may be on the horizon and sent stocks down even further. US shares have now shed around $9 trillion this year with the main large cap index having lost over a fifth of its value.

Once again the worst affected were highly valued, interest rate sensitive companies, accompanied this time by those whose businesses are increasingly considered impacted by economic slowdown.

Although the US has come down in value this year it is still one of the only major markets at a premium to its historical valuation. We also believe that it could be vulnerable to earnings downgrades as a slowdown becomes more apparent. As such we remain underweight.

Chinese stocks have continued to dance to their own tune, rallying in June with the domestic index hitting its highest level in the past 4 months. The impetus for the rally has been the promise of accommodating macro-policy as well as an easing of quarantine requirements for inbound passengers, the biggest relaxation of its zero-Covid policy so far.

Stimulus, is expected to continue as the Government looks to boost growth after a slowdown during the 2nd quarter that was caused by strict lockdown policies in a number of major cities.

In Japan, the currency has come under pressure as investors are questioning whether the Bank of Japan can have their wish of keeping interest rates at 0.1% or will they need to bow to market pressure and raise them, like the UK had to in 1992. Nonetheless, services activity and retail sales were strong after Golden Week holiday celebrations were able to go ahead free of Covid restrictions for the first time since 2019.

Market volatility was somewhat subdued during the first week of June but soon picked up as the VIX index climbed for the remainder of the month.

Gold edged down as real yields ticked up while other precious metals also fell on recession fears. We think the outlook for gold looks challenging from here with real yields expected to continue to rise.

Oil prices also fell victim to market worries that a global economic slowdown may be on the horizon. The price remains above $100 per barrel as Europe considers its available options for alternatives to Russian energy. OPEC continued with their plan to increase production, refraining from adding more supply to the market.

The pandemic-induced housing boom appears to be cooling off. In the UK, mortgage approvals have declined and house price growth is slowing. In the US the slowdown is even more prominent as mortgage rates have risen rapidly to over 5.5%, new home construction is down, pending home sales are down and mortgage applications have fallen.

On the other hand, as we transition out of Covid, an increase in travel is helping to support a recovery in hotel markets although it remains market and sub-sector specific. Elsewhere, from a defensive perspective, some operational real estate such as healthcare properties are gaining traction.