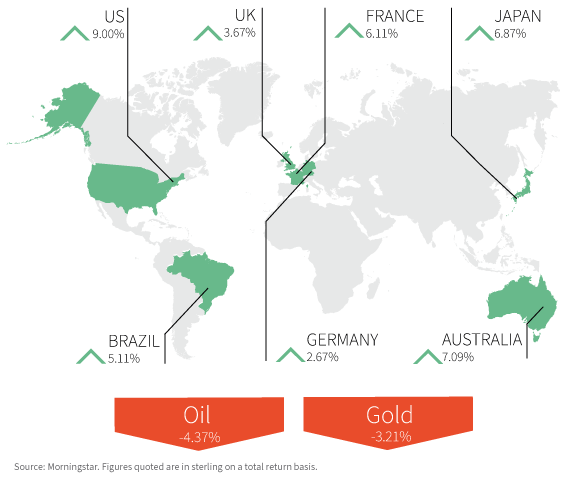 July offered investors some welcome respite following first half returns that were the worst endured in at least 50 years. The rebound was partly a consequence of the very low starting point in terms of investor sentiment and positioning but also due to a shift, perhaps ephemeral, in investor perceptions. In July investors began to hope that we may be approaching peak inflation fears and that interest rate fears will peak soon after. This usually means that the valuation of equity markets stop falling, particularly highly rated growth companies who are most sensitive to changes in interest rates.

The rebound was in a month where bad economic news was actually good news for financial markets as it reinforced the feeling that peaks in inflation and interest rates were on the horizon. This was just as well as weak economic news abounded in the US, Europe and the UK as well as several Asian markets.  A rise in Covid cases in Asia also caused alarm and a consequent drag on mobility. The assassination of former Japanese Prime Minister Abe also hit the headlines during the month.

Technology laden US Indices led the charge whilst Asia and Emerging Markets lagged in a reversal of prior market trends. Mid-Caps also performed better after several months in the shadows.

After the worst first six months of a year in decades, or even centuries in some instances, fixed interest markets enjoyed some welcome respite in July with broad and meaningful absolute returns being generated. Despite ever higher headline inflation numbers being released, investors were picking up on the phenomena that we mentioned in our May commentary i.e. that core CPI was peaking and that Central Banks were now out to slow the global economy. Indeed as the month progressed this latter development took on more importance as, on balance, a slew of economic data released across the Western World indicated that growth was indeed slowing. The combination of peaking core inflation and slowing growth is usually a heady combination for bond markets and so it proved in July.

However, we would caution that although we were very much in the camp that inflation was peaking, we do think it will be structurally higher over the next decade and therefore caution against expecting bond returns to be as robust going forward as they have been since the Great Financial Crises.

British shares enjoyed a strong rebound in July with mid cap shares outpacing large caps for the first time in a while. This was despite several weak economic statistics being published and the political uncertainty created by the resignation of the Prime Minister. So far corporate results have been better than feared with notable positive surprises from bellwether companies such as Shell, GSK, Unilever, Reckitt Benckiser, Natwest, Lloyds and Diageo. However, pleasing as these results were, they were not the main reason shares rallied. The more important factors were that investors began to think about peak inflation and hence peak interest rates. This change in sentiment, along with very negative investor sentiment at the end of June, was responsible for the sharp rally.

There is still plenty to be concerned about given the cost of living crisis, potential new policies from the incoming Prime Minister, Ukraine, supply chain issues et al. Nonetheless UK shares remain among the cheapest in the developed world and are in more robust health than in the recent past, especially the banks. Dividend yields are also attractive. This enables us to be constructive on a twelve month view, whilst recognising volatility is likely to remain elevated.

Europe was a key participant in the global equities rally in July, with the broader market gaining over 8% in local currency terms. As was the case in most regions, this was led by ‘growth’ stocks which benefitted from a steady decline in long-term bond yields.

The markets rallied despite the economic data being particularly weak. Euro Area activity indices (PMI’s) slipped into contractionary territory and Consumer Confidence surveys reached all-time lows. Although somewhat counter-intuitive, this was interpreted as good news by the market as it was perceived to mean less scope for further interest rate increases by the ECB, who enacted their first hike in over a decade this month.

This strength in markets came in spite of the fact that the political landscape became more precarious, with Italian Prime Minister Mario Draghi resigning after key coalition members boycotted a confidence vote. This now leaves the country facing a vote in September – a decision which favours the leader of the Brother of Italy party, Giorgia Meloni. Tensions also remain elevated across the region, as further cuts to the supply of Russian natural gas sent prices soaring once more. The continent is scrambling to find alternative sources of energy ahead of the winter, which could be very bleak if unsuccessful.

The US appears to be in a technical recession after GDP growth contracted for a second consecutive quarter. The labour market continues to remain strong however, we have started to see companies such as Tesla and Meta indicate they will be cutting staff. It is also now clear that a manufacturing slowdown is gathering pace.

The US Federal Reserve once again raised interest rates, this month by 75 basis points, although we now think we have reached a peak in aggressive Fed policy. If this is the case, the US dollar which is currently trading at a 20 year high may start to turn which would be a positive for risk assets.

Despite the recessionary narrative, US indices appeared to have taken this in their stride with the all three major indices rallying and consequently recording their strongest month of performance since 2020. The main technology index in particular benefitted from falling bonds yields which may now be peaking.

Even after the rally this month we advise caution. The US is still trading at a valuation (based on price to earnings) and earnings high versus other regions. Slowing growth in the economy and the potential for further earnings downgrades could put some pressure on the market this year.

Falling commodity prices and fears over the negative consequences that a global economic slowdown (or indeed recession) could have on the more export dependent Asian counties were the other main contributors to the underperformance of Asia and Emerging Markets.

India is a big beneficiary of falling commodity prices and is less export dependent hence the outperformance of that market.

Valuations are looking attractive and outperformance from Asia should ensue when investors garner more comfort over the trajectory of economic growth.

The realisation that economic growth is slowing markedly continues to be felt within certain commodity markets. During the month, oil prices fell by around 10% as an expectation for weaker demand drove prices back below $100 per barrel. Also noteworthy was a fall of around 20% in lumber prices, which had previously seen some of the largest gains amid a boom in construction and home improvement. This was not uniform across the sector however, as natural gas prices continued to surge amid further supply cuts by Russia.

Within precious metals, gold prices were volatile during the month as a move higher in real yields led to a deep selloff, before a retracement of this move led to a subsequent rally. By month end, the yellow metal was down close to 2%.

Evidence suggests that the UK property market will continue to see slower house price growth over the coming months. The rising cost of living continues to put pressure on demand for housing, whilst we could also see an increase in the supply of new homes from the building industry as Covid constraints fall. To elaborate, house prices rose by 0.3% in June, which was the smallest monthly increase since September 2021. Meanwhile, Savills have reported that the stock of homes for sale increased during Q2; something they expect to continue.

Elsewhere, according to data released by CRIC (a Chinese real-estate data provider) sales at China’s top 100 property developers fell by c.40% in July from the same period last year. Demand fell due to a widespread mortgage revolt over concerns that troubled property developers will not be able to deliver unfinished apartments, subsequently ending the two-month recovery in China’s home sales.