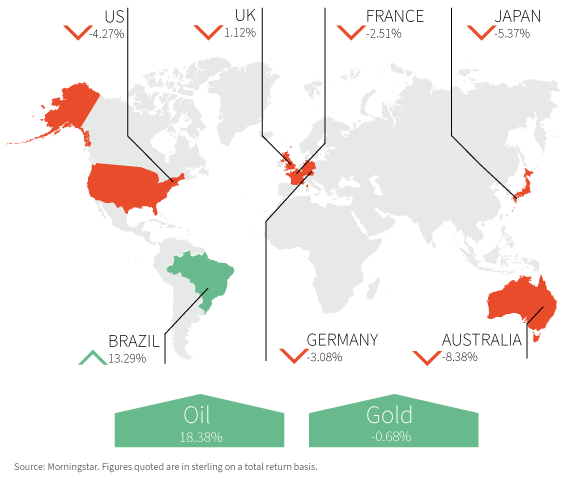 Oil and commodities were the star performers in January as almost all other asset classes, be they equities, corporate bonds or government bonds, suffered meaningful declines. Chinese government bonds and large cap U.K. equities managed to eke out marginal gains whilst technology heavy indices such as the US fared worst, with declines approaching double digits. In the property sector, U.K. based funds again eked out small gains as their international counterparts lost roughly 5% in value.

Much more aggressive language from the Federal Reserve Chair Powell with regards to tightening monetary policy was the acknowledged catalyst for the moves. Government bond yields are currently either through or very close to the highest levels attained since the pandemic struck in March 2020. Investors now firmly believe a tightening cycle is beginning in the West, with the US and U.K. at the forefront. Europe is somewhat behind but on the same path. China is on a different journey as they tightened policy last year and are now reversing course in a measured manner amidst slowing growth and a painful deleveraging within the property sector.

Slowing global liquidity is by definition a less hospitable environment for financial assets. However, with the recovery in real economic activity still relatively immature (we were locked down/restricted for three to five months last year) and both corporate and consumer balance sheets strong, we still expect robust GDP and profit growth in 2022. This should allow several parts of the equity market to advance, especially as the continued acceleration in inflation is likely coming to an end.

The rise in government bond yields, which recommenced in December, really accelerated in January as Federal Reserve Chair Powell became a lot more strident in his communiqués about the need to both raise interest rates and end reverse Quantitative Easing. Most western markets saw yields take out their post pandemic highs with the Ten-year German Bund edging into positive territory for the first time since May 2019. US yields have backed off a touch since but that has not been the case elsewhere.

Central banks in the West, particularly the US, have become discernibly more concerned that above target inflation is more permanent than originally envisaged. Indeed the Federal Reserve has formally dropped its adjective ‘transient’ in reference to its inflation outlook.

Since June last year bond markets had largely ignored strong inflation and yields fell as a return to 2% trend was widely anticipated .It is somewhat ironic that now, at the point of peak inflation, both Central Bankers and investors are finally becoming more frightened. Looking forward we see inflation remaining above the 2010-2020 average but dropping back towards 2.5%-3%. Five short term interest rate hikes are already anticipated by the market but we see further moderate rises in ten year yields by year-end, although it is likely a sharp contra-trend rally is imminent.

Large cap U.K. equities, quite literally, had the resources to withstand the wicked correction that embraced global equity markets during the month. The large weightings to both oil and miners, as well as banks, enabled the large cap index to eke out a slight gain amidst the widespread sell off. Mid cap and small cap stocks did not hold up so well, both experiencing a mid-single digit decline during the period.

As elsewhere, U.K. shares were caught up in the global realisation that Central Banks were possibly going to raise interest rates and drain liquidity faster and by more than consensus thought likely. This had a particularly severe impact on stocks who enjoyed higher valuations and whose market cap depended more on profitability many years out, as opposed to the here and now. For some stocks this was a much needed dose of reality.

However, taking a broader view of U.K. shares there are now swathes of the market that are on reasonable valuations relative to history and who have a similarly reasonable outlook with regards profitability .This means U.K. equities should advance from here over the coming months, even if the recently resilient value sectors are likely to take a breather, at least in relative terms.

Despite the ECB remaining considerably more dovish than other developed market central banks, the region still saw a significant move higher in bond yields, with the ten year German Bund reaching positive territory for the first time in over two years. This suggests that despite a lack of signalling from the central bank, markets are beginning to think about the potential for a hawkish pivot later on in the year to combat surging inflation, as observed in the Fed during December.

This had significant knock-on effects in the stock market, with growth stocks (the most interest rate sensitive) selling off aggressively and triggering a more broad-based downward move in equities. The one exception to this came from the energy sector, which continued to dance to its own tune on the back of further price increases in oil and natural gas. Although the market was down over 4% in local currency terms it outperformed its US counterparts, largely due to a greater weighting in sectors such as industrials and financials, which tend to benefit from interest rate rises.

Geopolitical factors also remain heavily in play for European investors, as the threat of a Russian invasion of the Ukraine lingers. Despite Vladimir Putin repeatedly denying any plans to do so, a continued build-up of troops and military resources around the border has many people thinking the contrary and is no doubt weighing on market sentiment somewhat.

US equities were buffeted in January as the impact of generally robust company reports were overwhelmed by the negative investor reaction to more aggressive Federal Reserve rhetoric on the outlook for interest rate rises and liquidity withdrawal. Highly valued and more speculative stocks suffered most and at one stage the most technology exposed indices were down nearly 15%. A rally of 7% in the last two days of the month by technology shares and 4% for the major index prevented the month being the worst start to a year in decades. Yet, markets still closed down in the mid to high single digits.

Omicron and supply constraints have caused the rate of economic expansion to cool of late and this added to investor angst. However, our analysis leads us to believe that sequential growth will re accelerate as spring approaches, thus ameliorating this particular fear.

At the end of December, investors were discounting three 25 basis point rate increases during 2022. Now commentators expect at least four and up to six 25 basis point increases with a few even muting that a ‘shock and awe’ rise of 50 basis points may happen as a start. We very much doubt this constant upping of base rate expectations will persist and indeed see inflation peaking (at very high levels) imminently. Markets look to have bottomed for now but we expect further bouts of volatility as slowing annual growth (to a still decent level), slowing price rises (but still higher than the recent past) and rising rates all cause investor concern. At the same time profit growth is likely to continue and the Federal Reserve will be careful about not inducing a recession, so investors will have both good and bad news to digest.

The diversity of Asian economies and stock markets was clearly illustrated during the month as those in northern Asia such as Japan, China and Korea suffered significant drawdowns on a par with their Western counterparts, while India, Indonesia, Thailand, Philippines and Singapore were either flat or slightly up. Hong Kong was the exception to weakness amongst large northern peers.

Worries about renewed Omicron related restrictions in Japan and China impacted sentiment along with the global implications of heightened fears about the rapidity and magnitude of US interest rate rises and liquidity withdrawal. Such sentiment overwhelmed the incremental policy easing in China (which will be ongoing) amidst slower growth and deleveraging within the very important property sector.

It should be noted that, as in the West, the technology sector was at the forefront of losses. In aggregate, despite the overall weakness, Asia slightly outperformed the US market. This trend will likely continue medium term as Asia is at or near the end of a tightening cycle, which is just staring elsewhere. Furthermore, as mentioned above, China is already easing and Japan is behind the West in its re opening growth spurt. Both phenomena will provide support for the region.

January was a mixed month for alternative assets, as volatility spiked in markets having been subdued for much of last year. Although many absolute return funds can benefit from increased volatility, a broad basket of funds showed that this market move caught many off guard and returns were disappointing.

However, it was yet another strong month for commodities with Crude oil prices rising above $90/barrel for the first time since 2014. Fears over the economic impact of Omicron subsided and international travel began to pick up once again, driving further demand for oil. Additionally, concerns that inventory in Cushing Oklahoma was beginning to run dangerously low also contributed to the upward movement in prices.

Gold fulfilled its role as protection against volatility in equities, rising steadily throughout the month. However, a surge higher in the US Dollar towards the latter stages was a drag, causing performance to be slightly negative by month end.

This month saw a continuation of the strong run for UK property, with house prices rising by the fastest of any January since 2005. Year-on-year, house prices were up 11.2%, as the market shrugged off fears that Omicron could hold back the real economy.

Globally, property performance was weaker with many US listed property funds seeing mid-single digit price falls as the prospect of higher base rates in the coming months took its toll.