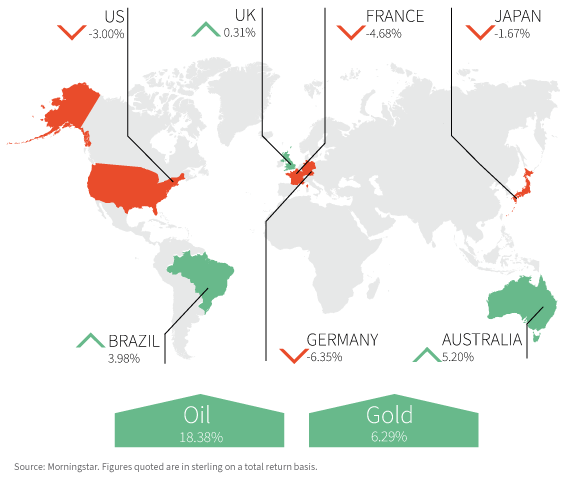 February was a chaotic month for investors as they first had to cope with re-accelerating economic growth and an attendant worsening of the inflation situation which caused bond yields to rise to post-pandemic highs. Then markets had to react to the worst case scenario of a full Russian invasion into Ukraine and the impact of extensive financial and economic sanctions which ensued.

Bonds have well and truly lost their low volatility tag as yields surged and collapsed all within a month. This will cause some long term issues for asset allocators and has been a concern of ours for some time now. We are consciously trying to confine ourselves to less volatile instruments within each segment of the bond market.

As of the time of writing markets are very much in risk-off mode due to the wide range of potential outcomes , some of which are particularly negative.

However, as the first sentence suggests, the global economy was in decent shape entering the crises and pent up demand remains unsated. Combined with the fact that Western governments will do even more work to keep their economies on track we will use further volatility to both add to positions and tweak current holdings.

Whilst times such as these are usually seen in retrospect as opportune buying moments please rest assured we will always have an eye on risk as well.

February was a wild ride for fixed income markets as yields rose dramatically through mid-month, in many instances to post-pandemic highs, before falling precipitously on fallout fears from the conflict in Ukraine.

Even before the invasion there had been some investor debate as to whether central banks had switched from being too complacent about inflation to potentially being overzealous.

We think this potential zeal has been tempered by events in the Ukraine with the US being the most likely exception.

More clarity about the end game will be required before markets calm down but when it emerges there is ample scope for bond yields to rise back up again. One of the most likely outcomes of the conflict is increased defence spending across Europe and this could add to long term pressure on yields.

As we would expect in such tumultuous times corporate and high yield bonds fell too so no bond market escaped unscathed. Local currency emerging market debt held up best over the period.

A virtually unchanged large cap index masked what was another very difficult month for UK equities as mid cap, small cap and more generally non-resource stocks were buffeted by each of the imminent tightening of monetary policy , upcoming squeeze on real incomes and latterly the conflict in Ukraine. Resource stocks, particularly oils, were the most sought after equities and defensive stocks, unsurprisingly, made a strong relative comeback on the back of mounting uncertainty.

Away from the conflict, economic activity was on the whole encouraging but rate fears were further fuelled by inflation hitting a forty-year high. Retail Sales and the Purchasing Managers Index are two examples of encouraging activity releases.

The Ukrainian conflict has significantly increased the uncertainty around the trajectory of inflation, interest rate increases and business confidence so we will stay close to events and asses opportunities as they arise.

With many positive economic factors and the worst of COVID behind us we are still positive on the medium term prospects for UK equities.

European equity markets were dominated by the news flow surrounding Russia and Ukraine in February, as the region which stands to lose the most from this crisis. The selloff was broad based and companies both small and large were sold by investors, leading to losses in the region of -5% for the month.

The biggest issue for Europe is likely to be the knock-on effect that this will have on pricing pressures. Much of the headlines are focused on Russian oil, but the most stress will be felt within natural gas, on which the region currently relies. Gas makes up a much smaller percentage of the Russian export picture than oil and as such, its supply is more likely to be cut off. Such an event would have large scale implications on both the cost of living for households, in addition to input costs for producers and depending on the extent of the issues, could materially slow economic activity.

Having reported in January that German Bund yields climbed into positive territory for the first time in over two years, they began to reverse course in the latter stages of February as markets assessed the longer-term impacts of the crisis. The market now expects that central banks will take a slower and steadier approach to tightening monetary policy, however the ECB will have a lot of conflicting factors to take into consideration when plotting its course.

For the first three weeks of February, value continued its year-to-date resurgence versus growth after the biggest year-on-year gain in CPI inflation for 40 years. Geopolitics soon superseded inflation in the headlines as Russia commenced its invasion of Ukraine, reversing the trends seen earlier in the month.

Leadership turned towards defensive names at the end of the month and technology rebounded as bond yields fell.

At the index level, markets responded to the crisis in Ukraine by declining as sanctions were imposed on Russian companies, individuals and financial institutions. The wider market ended down just less than 3%, with other indices down more, despite a brief period of respite in the final days of the month.

As things stand, the US should remain fairly well insulated to events in Eastern Europe. Energy independence and little direct Russian exposure means that the US market could well act as a safe haven should the conflict escalate further.

Asian equities in general offered relief from the trauma encountered in the West. Hong Kong and India were the exceptions as technology regulation roiled the former and vulnerability to higher oil prices impacted the latter.

Chinese authorities have signalled they will continue to ease and economic numbers there are showing tentative signs of recovery.

We are optimistic on Asian equities this year on the assumption that Sino Taiwanese relations remain under control.

Our optimism is based on the fact Asia is closer to the end of a tightening cycle than the West and have more reopening pent up demand.

Volatility remained elevated during the month, with the VIX breaking back above 30 in the latter stages as events unfolded in Ukraine. In aggregate the absolute return sector failed to meaningfully take advantage of this, with a broad basket of funds showing negative returns in February. Gold however continued to play its role as crisis protection in portfolios, with the precious metal gaining over 6% amid a flight to defensive assets.

Commodity prices continued to march higher also, with crude oil breaking through the round number resistance of $100 per barrel for the first time since 2014. Russia remains a key exporter in the market and the developments in Ukraine will undoubtedly disrupt supply. The US is considering another release of strategic reserves in an attempt to ease the upward pressure on prices, however it is notable that this had little impact when executed at the back end of last year.

The UK property market continued to run hot last month as several data releases showed strength continued into the New Year. House prices once again moved to an all-time record high in January although there were some early indications that the pace of growth may be beginning to slow. The removal of government support and the cost of living squeeze in the UK could be catalysts for a slower market later on in the year following two years of rapid house price growth where over £40,000 has been added to the average UK home price.