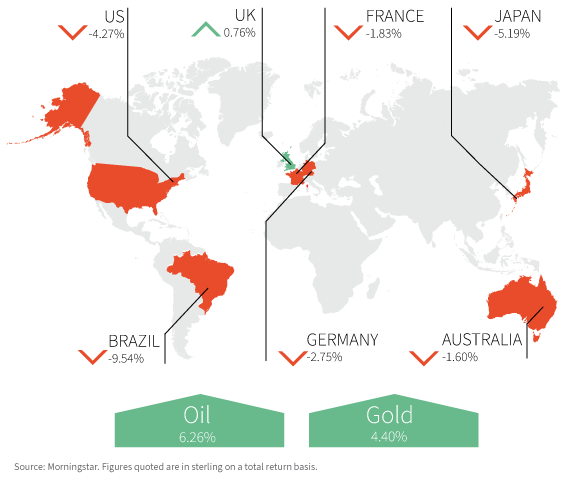 Posted on 11 May 2022 by WH Ireland Wealth Management

Financial markets did not have much to cheer as a plethora of unwanted developments coalesced to drive down most asset prices. This encompassed equities, government bonds, corporate bonds and most currencies excluding the US Dollar. Copper also fell during the month although oil ended a volatile month slightly higher whilst agricultural commodities mostly enjoyed strong advances. Indeed stronger commodity prices were one of the issues for other financial markets. Persistently strong inflation, falling consumer confidence, declining real incomes in the West, Covid 19 lockdowns in China, further regulation in China, testing of the Bank of Japan’s resolve all concerned investors too. And then there was the not insignificant matter of the ongoing war in Ukraine.

All of the concerns above have some validity. However, investor confidence has reached low levels historically consistent with imminent improvement. Inflation is in the process of peaking and, in our analysis, investors are no longer complacent about the inflation and the need for interest rate rises. China is acting to ease fiscal and monetary policy and has stated it will expedite regulatory reviews to “underpin the platform economy.” With Japan also reopening post Covid news flow is likely to improve from here.

So we continue to look for opportunities.

The US 10 year bond yield is now almost 3% as opposed to just over 1% last autumn. So areas for further consideration are not confined to equities.

The Global Bond Index suffered a fall of nearly 5% during the month, the worst return since the inception of the index in 1990.

Investors and Central Banks seem to have belatedly woken up to the level and persistence of inflation and are now intent on making up for lost time. Investors have taken this to mean that interest rates will rise more quickly and to higher than anticipated levels despite the cost of living crisis that is crimping volume of consumer demand.

We agree interest rates will rise quicker and by more initially than was expected but doubt that the terminal rates will be much higher.

After having the minimum weight possible allocated to government bonds of Western countries over the last couple of weeks we have dipped a tentative toe into the water and bought a few as US yields are closing in on 3% as opposed to just over 1% last autumn.

Although up only modestly in absolute terms UK equities outperformed most international peers during the month. Once again the larger company focussed indices outperformed their small and mid-cap brethren.

Investors in the UK are struggling with the twin threats of decelerating growth and very high inflation rates which seem to keep exceeding already high expectations. This has led investors to avoid most consumer discretionary names and seek shelter in less economically sensitive names and also in selected commodities.

Investors are punishing companies whose results do not meet what is expected of them or who guide to lower than anticipated growth in the immediate future.

However, valuations in the UK are now meaningfully below average and we are of the view investors are erroneously simply extrapolating near term trends on both the economic growth and inflation fronts. Therefore we are looking for buying opportunities over the summer months.

The attractiveness of UK equities has been bolstered further by the recent acute weakness of Sterling against the Dollar.

With the Ukraine conflict now into its tenth week, it is hard to believe that European equities have outperformed both the US and Asia since the day of the invasion. Although the market fell much more aggressively in the initial days, fears over monetary tightening by the Fed and renewed Covid lockdowns in China have allowed shares on the continent to deliver better total returns over the period.

However, in absolute terms this is still deeply negative with the index falling more than a percent throughout April. Europe was not immune to yet another bond market selloff, with benchmark German Bund yields climbing close to forty basis points by month-end. As such, it was the higher multiple ‘growth’ stocks that fared the worst, which are most sensitive to changes in financing costs.

Looking at the bigger picture, Europe continues to face a number of headwinds. Economic growth will inevitably take a hit as the war takes its toll through its impact on commodity prices. This will have secondary effects on consumers as the elevated inflation eats away at disposable income and damages sentiment. Pressure on the ECB to be more proactive at tackling price rises may also compound the issue, as it is forced to hike into a slowdown.

In April American large cap shares suffered their worst month of market performance since March 2020. The market was led downwards as inflation continued to roar through the economy and the Federal Reserve talked up the prospects for hawkish tightening policies. Producer Prices increased at the fastest rate on record, and the Fed followed this by upping the ante with several statements from multiple members of the governing committee. Three 50 basis points interest rate hikes are now priced into markets for June, July and May.

Markets were also rocked by fears of an inflation-induced slowdown and a further outbreak of Covid in China that led to restrictions in both Shanghai and Beijing. First quarter earnings then took centre stage in the final week of the month. Several disappointing releases from large index constituents led the technology market down over 13%, for its worst month since the Great Financial Crisis in October 2008.

On the back of a more cautious global economic outlook the US Dollar Index continued its strong run, rising to the highest level since 2002 and now up more than 7% since the start of the year.

The negative impact of ongoing draconian Chinese COVID related restrictions on movement further dampened enthusiasm in the region. This was on top of the general concerns globally about the potential consequences of rapid interest rate rises in the US and other Western countries. These factors, combined with further regulatory issues meant that Technology and Internet names lagged badly through most of the month. However, by month end some respite was seen for these and the market as a whole after some rate cuts (unlike the West) were enacted. The authorities said they would expedite further regulation so as to underpin the ‘platform economy’ and the Politburo firmly stated its policies would be pro-growth from here.

Despite the reopening in Japan continuing apace, equities there suffered a fall of just under 5%, more or less in line with regional peers. Weakness in the Yen was a feature as investors are testing the Bank of Japan’s resolve to peg 10 year bond yields at a maximum of 0.25%.

In both Japan and China valuations are now below normal and domestic growth is poised to accelerate somewhat going forward.

Volatility in markets did not remain subdued for long, with the VIX index climbing back above thirty by month end. Many absolute return funds were caught flat footed by this in the first quarter, but a broad basket of funds showed positive total returns for the month of April.

Likewise, listed infrastructure funds were able to deliver positive returns during a volatile month as elevated power prices continued to act as a tailwind, particularly for renewable energy companies. Within traditional energy, oil prices were marginally up over the month with crude oil continuing to trade close to $100/barrel.

UK house prices continued to appreciate as March readings suggested the fastest pace of growth in 6 months and again saw property prices hitting a new record level. However, there were some tentative signs that the pace of growth was beginning to slow, despite remaining above 10% on the year before.