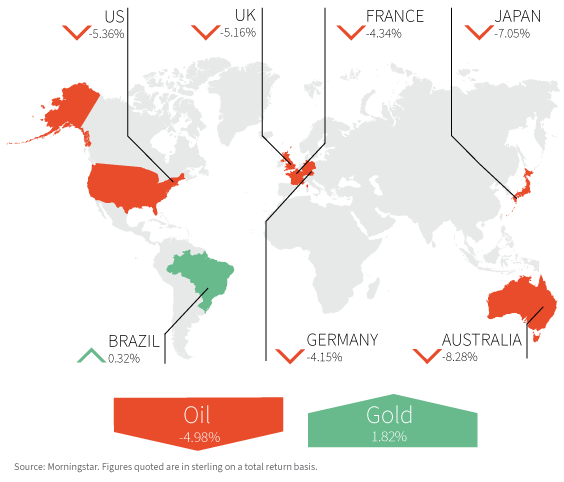 It was a painful month for investors as asset classes sold off fairly indiscriminately. Correlations between bonds and equities remained high, evidenced by falls of more than 10% in a wide range of markets (Source – Morningstar, Sept 2022). UK long dated government bonds, US technology and emerging market equities all suffered double-digit declines in September.

For the majority of the month it was the extreme hawkish US Federal Reserve rhetoric that, coupled with stronger than expected inflationary prints, rocked markets. This was superseded towards the end of the month when the new UK Government released a “mini-budget” defined by tax cuts funded by the biggest increase in borrowing since 1972. That was seen by the market to be pouring fuel on the inflationary fire.

As a result, it was the sharpest monthly rise in gilt yields since at least 1957 and Sterling weakened to an all-time low versus the US Dollar before rebounding somewhat on news that the Bank of England had intervened to calm the Gilt market.

The Federal Reserve and ECB raised interest rates by 75 basis points during the month whilst the Bank of England raised, as expected, by 50 basis points.

All of government bonds, investment grade corporate bonds and high yield bonds fell as market commentators vied with each other to predict how high rates will go. This is despite many long term inflation indicators (e.g. in US the 5 year expected breakeven level of inflation) falling dramatically of late and many supply chain issues beginning to ease, e.g. semiconductors.

With bond yields in many instances at ten-year highs we are seeing opportunities, even in areas we haven’t touched for a decade.

The asset class suffered another torrid month with small and mid-cap equities once more bearing the brunt of the losses, although large cap indices did suffer to a moderate extent.

The concerning double act of ever more aggressive interest rate rises from the Bank of England and mounting investor concerns about an imminent recession were mostly to blame. However, accelerant was thrown on those particular fires by the so called “mini budget” on September 23rd which sent all of UK domestic equities, government gilts, corporate bonds and Sterling into a tailspin.

This has resulted in UK equities de-rating further from already cheap levels, as investors fear that the budget and plans to ameliorate the cost of living crisis will be overwhelmed by significantly higher interest rates.

Whilst the next few months are likely to be choppy, most of the companies we are looking to invest in have been through many cycles and, in general, are in possession of strong balance sheets.

We are therefore looking for opportunities at these unusually low valuations.

The geopolitical uncertainty worsened this month after the Nordstream pipeline, which transports natural gas from Russia to Europe, was compromised. Several nations have been pointing the finger at Russia who have thus far denied the allegations. This could have longer term ramifications for markets as Europe is still dependent on Russian gas.

Despite this, gas storage levels are currently sitting above the historic trend as European countries across the board have made good progress in securing alternative supplies. Gas usage has also come down versus this time last year which is encouraging.

In markets, Eurozone inflation came in at a new record high in September pilling pressure on the ECB to continue to hike rates sharply with a 75 basis point hike currently priced in at the next meeting. Manufacturing continued to decline in the month at a quicker rate than in August and consumer confidence fell to a new record low.

The Eurozone has now experienced the largest outflows out of all major global markets this year. As a result of this and the geopolitical uncertainty, European stocks now screen cheap on a number of valuation metrics, some of which suggest a recession has already been priced into market valuations.

The main two US large cap indices made it three consecutive quarters of market declines for the first time since 2009 as September proved to be another bruising month for US investors. Main market indices fell in the range of 8.8% and 10.5% last month (Source – Morningstar, Sept 2022), making it the worst month since the pandemic for some.

The US Federal Reserve raised rates for a third consecutive meeting and continued with their hawkish rhetoric that sent bond yields yet higher still. This helped the US Dollar continue its surge to a two-decade high, leaving it up 14% year-to-date (Source – Morningstar, Sept 2022).

Housing has continued to slow and several discretionary companies began to see earnings come under pressure. Nike and Carnival are high profile consumer names that fell victim to profit warnings in September.

Shares in the region were caught up in the financial market turmoil and Hong Kong, Korea, Vietnam and Taiwan were all down double digits. As has often been the case recently, India was a relative outperformer although it did fall low single digits. Domestic Chinese shares suffered a mid-single digit fall whilst Japan fell about 7% (Source – Morningstar, Sept 2022).

The Chinese currency, like international peers, came under pressure versus a buoyant dollar and had its sharpest fall in several years, causing some investor anxiety.

Vietnam, Philippines and Indonesia all raised interest rates in keeping with the US Federal Reserve.
Asian markets had been holding up relatively well in Q3 but eventually succumbed, as they usually do, to significant dollar strength.

As we have oft said, Asia has far less of an inflation problem and many countries there acted sooner than Western peers to deal with what issues they did have. They are therefore poised for recovery as US inflation fears dissipate.

Oil prices recorded their fourth consecutive monthly decline in September as a result of an expected slowdown in economic growth given the aggressive monetary tightening across developed markets. In addition to that, the stronger dollar makes greenback-priced commodities more expensive for overseas buyers which has further dampened demand. However, in response, OPEC is rumoured to be considering a cut to production which could boost prices.

Europe’s natural gas demand decreased by low single digits from a year earlier in the first eight months of 2022, the largest drop was in the industrial sector. Meanwhile in the UK, Prime Minister Liz Truss announced a package to ease the ongoing cost-of-living crisis, including capping domestic energy prices for households at £2,500 while limiting them for businesses.

A mortgage lender reported that UK house prices failed to rise month on month for the first time since July 2021. They also noted that annual house price growth slowed to 9.5% from 10% in August (Source – Nationwide, Sept 2022). The reason for the fall has been inflation impacting consumer savings which is reducing housing affordability and therefore dampening demand.