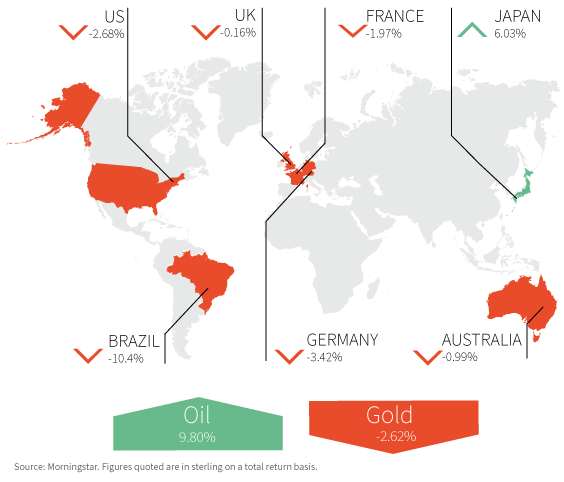 The “September Effect” was felt once again as many major indices declined during a month that has historically been considered one of the worst months for equity investing. Chinese regulation and potential tapering of asset purchases continued to sway the market, whilst debt servicing issues came to a head at Chinese lender China Evergrande. This prompted fears of a Lehman-type moment and consequent market contagion.

Japan was an exception to the rule, the Nikkei climbed more than 5% after Prime Minister Suga was replaced by the former Foreign Minister, Fumio Kishida, who like many other global leaders, has placed tackling inequality at the forefront of his economic planning. Bonds yields rose towards the end of the quarter following a meeting of the Federal Reserve, causing sharp bouts of volatility in bond markets and a significant sell off in longer-dated government bonds.

Bond yields rose towards the end of the month after the US Federal Reserve moved ever closer to tapering its asset purchases. Risks to inflation forecasts now appear very much to the upside and this was reflected by a hawkish shift in the “dot-plot”, which illustrates the expectations for interest rate hikes by FOMC members. Yields had appeared to be fairly range bound during of the month after mixed economic readings but broke out after the Fed’s meeting on the 22nd. The US 10 year Treasury bond yield was 1.31% at the end of August and was still there prior to the Fed’s meeting. By the end of the month it was within touching distance of 1.50%. The UK 10 year Gilt yield was on an upward trajectory throughout the month, closing above 1% for the first time since May 2019.

The UK stock market declined in September, with the broader market falling by around 1%.  The more domestically orientated mid cap stocks led the decline on growing concern over inflationary pressures and cuts to forecast economic growth globally and in the UK. Larger companies held up better, in particular the oil and gas sector which continued to benefit from the rising price of oil.

While the vaccination program has been a huge success the UK economy is still suffering the effects of Covid.  The UK’s summer ‘pingdemic’ saw widespread shortages of staff everywhere that led to empty shelves, lower footfall in the high street and bottlenecks in the delivery of goods and services.  The shortage of petrol on the forecourts is just the latest symptom of the ongoing drag of Covid and Brexit on supply chains and on manufacturing capacity worldwide.

While we are seeing companies reporting higher costs and a shortage of skilled staff it should not really be unexpected given the strength of the recovery. It takes time to get goods flowing and it takes time to take on staff and train them.  While we are seeing analysts downgrade forecasts in some sectors the outlook for corporate profits growth remains strong and over the latest quarter we continued to see bids for companies across many industries, indicating that the UK remains undervalued.

Europe’s winning streak came to an end in September, with a gradual downturn in the region’s equities being followed by a more aggressive selloff in the latter stages of the month. This was driven primarily by a sharp increase in bond yields, which allowed for ‘value’ stocks to outperform and ‘growth’ stocks to suffer the largest losses.

Within the region’s largest economy (Germany), a general election was tightly contested and resulted in a narrow victory for the centre-left Social Democrats. However, a coalition will be required and the resulting structure of the government could take months to determine, creating some degree of uncertainty. However, Angela Merkel will remain Chancellor in the interim period.

Overall, the longer-term outlook for Europe remains broadly positive with economic data still pointing to a moderately strong recovery from the pandemic and improved earnings outlook for businesses.

US markets suffered a setback in September with the Dow, Nasdaq 100 and S&P 500 all down between 4% and 6%. The nature of inflation has been a hot topic in markets for several quarters now with the Fed’s comments coming under scrutiny throughout. This was no different in September as an upward shift in the Fed’s dot-plots, an admission that inflation has been more prominent and longer lasting than expected and further talk about tapering led to a rise in bond yields and a selloff in longer duration assets.

Alongside this, markets had appeared shaky with fears of contagion from the China Evergrande debacle and greater variability in economic numbers following the spread of the Delta variant. This culminated in the worst month for the S&P 500 since March 2020.

Headlines in the month were dominated by the travails of Chinese property behemoth Evergrande and its likely debt restructuring. Some commentators went as far as to label it China’s “Lehman Moment” amid concern about widespread contagion across the Middle Kingdom. However, despite these concerns the consensus is still that the Chinese Authorities will enact a managed work out such that trade creditors and domestic bond holders take, at worst, a manageable loss and thus avoid a credit crunch.

Interestingly whilst the Hong Kong stock market suffered during the month, those on mainland China generally fared better and whilst the region produced diverse returns there was no noticeable knock-on effects from events in China. Indeed markets in Japan, India and Vietnam produced very strong returns in the 4-6% range.

China is likely to ease financial conditions going forward, Vietnam and Japan are in the process of reopening their economies and vaccines are being rolled out at increasing pace across the region.

These factors combined to increase the likelihood of positive returns for the region in the fourth quarter.

Having consolidated over the past couple of months, oil prices continued meaningfully higher in September, climbing upwards of $80/barrel for the first time in over 3 years. Gas prices also surged as the world braces for a winter energy crunch that could weigh on economic growth. Several developed economies such as Italy and France have introduced measures to support lower income households amid the rising prices, while the US has called for an investigation into why petrol prices continue to rise so dramatically.

Within precious metals, it was a deeply negative month for Gold and Silver as real interest rates rose and the US dollar appreciated against a basket of other major currencies. These combined forces have historically been a major headwind for the asset class and September was no exception to this.

UK property shares or REITS (UK Real Estate Investment Trusts) underperformed the market in September as discounts widened in response to rising bond yields and the slowdown in the recovery.

The opinions expressed in this communication may differ or be to the contrary of those expressed by other individuals within the WH Ireland Group and they are subject to change without notice. We have issued this communication for information purposes only and it does not constitute financial, professional or investment advice or a personal recommendation, nor does it constitute a solicitation or an offer to buy or sell any securities or related financial instruments in any jurisdiction. No representation or warranty, either expressed or implied, is provided in relation to the accuracy, completeness or reliability of the information contained in this communication, nor is it intended to be a complete statement or summary of the securities, markets or developments which may be referred to. Past performance is not indicative of future performance and overseas investments are subject to fluctuations in exchange rates. The value of investments and the income from them may go down as well as up and investors may not get back what they originally invested.