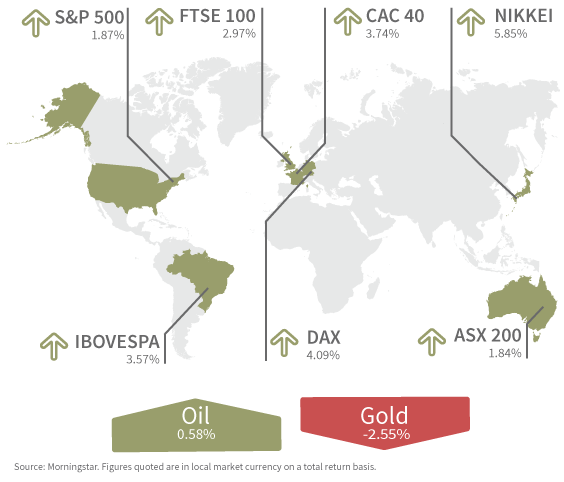 Investment returns were generally positive over the month despite disappointing economic news and an increase in geopolitical tension, particularly in the Gulf, following the drone attacks on the oil processing facilities in Saudi Arabia.

Fixed interest returns remained positive though the year-long rally driven by expectations of lower interest rates and a resumption of quantitative easing by central banks intent on stimulating economic growth which lost momentum.  With bank deposit rates and many government bond yields actually negative, central banks can do little more and have been increasingly vocal in their request that governments take the lead.

Stock markets also delivered positive returns, driven by a US economy that is still growing at a good pace, despite the ongoing trade war with China and by investors starting to price in expected higher government spending and tax cuts.

In the short term, we expect the economic and corporate news on which traders rely to reflect the slowdown in global trade led by the US-China trade war. But with interest rates now firmly in ‘lower for longer’ territory again and governments lowering taxes and looking to increase spending, we expect the outlook for investors with longer time horizons to improve as we enter 2020.

The mantra of ‘lower for longer’ for interest rates may seem like a tired phrase but it remains wholly relevant for the global fixed interest market, meaning rates are likely to be kept low for the foreseeable future. Crucially during September, the US Federal Reserve gave in to pressure from investors and politicians and lowered interest rates to the 1.75% to 2% range. It would now seem as though they are in ‘pause mode’ and that the members are becoming divided over the next direction of action. President Trump argued that rates should be reduced to zero. Over the month, the headline 10 year US Treasury yield rose slightly from 1.496% to 1.665%. In the UK, Gilts were largely flat on the month but did react to a member of the Bank of England stating it was ‘quite plausible’ that interest rates would be cut in the UK, even if a hard Brexit was avoided.

UK equity markets turned positive in September, as the UK top 100 companies and UK All Share indices returned 2.92% and 2.91% respectively. The main market benefitted from strong gains in the Financial, Energy and Materials sectors with Consumer Staples being the only detractor. Sterling gained 1.09% against the US dollar, buoyed by the likelihood of a no deal Brexit diminished although uncertainty still remains on what will happen come 31st October.

The UK Manufacturing PMI rose to 48.3, which was up from 47.4,  whilst also beating expectations of 47. This still remains below a reading of 50 – indicative of underlying contraction – for the fifth consecutive month. New work orders in both the domestic and international markets slowed, causing overall output to contract. Employment suffered the biggest rate of decline since February 2013 as companies reported reduced capacity due to lower demand and cost control measures alongside industry redundancies. There was an increase in buying levels as companies started to once again prepare for Brexit. Input prices and selling prices both eased over the period. Business optimism improved from the record low in August but still remained subdued.

House prices unexpectedly fell in September according to figures released by Nationwide. A fall of 0.2% meant that the average price of a house is now £215,352. Prices outside London and the South East continued to rise, but an annual drop of 1.7% in the capital weighed down on the national average. The Office for National Statistics confirmed that the UK GDP fell by 0.2% in the second quarter of 2019, year-on-year it was confirmed that the economy grew 1.3%.

The Bank of England voted unanimously to keep the base rate at 0.75%, but in August implied that gradual and limited rate rises may occur over the next few years if the UK left the EU with a deal.

There was some respite for investors in September as equities rebounded from a poor August. The Euro Stoxx 50 rose by 4.25% on a total return basis in local currency terms, with the German DAX rising 4.09%. This is despite the Munich-based Ifo Institute for Economic Research once again reducing the country’s GDP forecast growth rate for 2019 from 0.6% to only 0.5%. Clearly, the export-driven economy has been hard hit by the global trade tensions and it will be interesting to see whether this spills into the resilient German consumer and service sectors. Meanwhile in Italy, the MIB rose by 3.92% on signs that the consumer sector could finally be showing signs of recovery. The economy will actually contract by approximately 0.20% in the current year before a return to growth of 0.50% in 2020. In France, the CAC 40 index climbed 3.74%, as it emerged the government was planning €10 billion of tax cuts to boost spending. We remain cautious on the region.

The US equity market recovered somewhat after a sell-off last month. The catalyst was the 0.25% reduction in interest rates by the US Federal Reserve. This is the second rate cut this year and only the second reduction since 2008. Concerns about slowing global growth and trade friction were cited as factors in this monetary easing. The broader, more economically-sensitive S&P 500 rose by 2.05%, compared to 0.83% for the NASDAQ, suggesting a move away from the more highly valued technology shares. The US dollar weakened against the pound, slightly reducing the return to sterling investors. The higher yield corporate bond market delivered a positive return of 0.36%.

US trade policy remains an issue for the market. The ongoing tariff dispute with China continues to have ramifications for the broader economy and industrial sectors. However, GDP forecasts remain positive for the rest of 2019 and 2020, which should support earnings growth for the corporate sector.

The Bank of Japan (BoJ) left its key short-term interest rate unchanged at -0.1% at its September meeting, hours after the US Federal Reserve lowered the US interest rates. Policymakers also kept the target for the 10-year Japanese government bond yield at around zero percent, but emphasized they would review economic and price developments more thoroughly at the next policy meeting. This was widely expected and heightens the chance of expanding stimulus as early as October. Interest rates set by the BoJ have averaged 2.75% over the period 1972 to 2019, reaching an all-time high of 9% in December 1973 and its current record low of -0.1% in January 2016.

Economic data issued by the Statistics Bureau of Japan during September showed that core inflation, which removes volatile food prices, came in at 0.5%, the lowest rate of inflation since 2017. The Ministry of Finance also issued provisional statistics that showed that Japanese exports fell by 8.2% year on year, marking their worst performance since January. Unsurprisingly, Japanese manufacturing activity also fell to a 7-month low as the latest Jibun Bank flash manufacturing PMI, released on 24 September, produced a reading of 48.9 for the month, down from 49.3 in August. Any figure below 50 indicates that the manufacturing sector is contracting.

In the face of seemingly worsening economic data, Japanese equities had a strong month with the Nikkei 225 posting returns of 6.1%. This was in part due to Prime Minister Shinzo Abe signing a partial trade deal with the US where he agreed to slash agricultural tariffs on beef, pork, wine, cheese and other goods to the levels offered to other nations in the Trans-Pacific Partnership, a regional trade pact from which Mr Trump has withdrawn. In turn, the US agreed to slash tariffs on musical instruments, which are produced in an industry cluster in Hamamatsu; sunglasses, which mostly come from Fukui Prefecture; and green tea, whose production originates from Shizuoka.

In terms of current shareholder ownership and corporate control, the Japanese central bank has already become a major shareholder of 50% of Japanese listed companies. According to a forecast by the Nikkei daily, the BoJ is set to be Japan’s largest shareholder by the end of 2020, topping the Government Pension Investment Fund (GPIF). Either way, the government sector – as represented by the BOJ and GPIF – looks set to become the top player in Japan’s stock market over the coming years.

Investors will be looking to the resumption of trade talks between the US and China next month for a tailwind as we move into the last quarter of 2019.

The reality remains that current economic soundings from Japan, Singapore and South Korea highlight the costs from weaker trade and a slowing China. The recent efforts from Beijing to stimulate the economy are yet to counter the growing effects of heavily indebted balance sheets within the financial sector.

The last 10 years show a striking divergence in performance between the S&P 500 and MSCI Emerging Markets index, with US equities having doubled in value since 2007 and Emerging Markets effectively unchanged. This has provided contrarian investors (such as GMO – the Boston-based investment group) with the case that the next seven years should see Emerging Markets ‘value’ shares outperforming as they operate in those economies with more scope to ease interest rates and apply fiscal stimulus.

The asset class continues to suffer from bifurcation. On one hand, the historically low level of bond yields continued in September, with potentially early signs that the Bank of England may have to reduce interest rates. On the basis that many investors compare long term gilt yields to Commercial Property yields, Commercial Property remains very favourable. On the downside, Brexit continues to act as a handbrake on the UK economy and, crucially, investors’ commitment to invest in property. Decisions are simply being delayed. The drag from the structurally-challenged retail sector also remains. This has led to 10% of the total assets in UK property funds being liquidated in 2019. The FCA continues to scrutinise the liquidity of the sector to protect investors. The iShares MSCI Target UK Real Estate fund gained 3.86% on the month.

After a very strong performance so far in 2019, in the precious metals sector, Gold succumbed to some profit-taking over the month of September, causing prices to fall. It declined by 2.55%, as US yields moved up from their lows, and the important ETF sector also saw outflows.

The opinions expressed in this communication may differ or be to the contrary of those expressed by other individuals within the WHIreland Group and they are subject to change without notice.

We have issued this communication for information purposes only and it does not constitute financial, professional or investment advice or a personal recommendation, nor does it constitute a solicitation or an offer to buy or sell any securities or related financial instruments in any jurisdiction. No representation or warranty, either expressed or implied, is provided in relation to the accuracy, completeness or reliability of the information contained in this communication, nor is it intended to be a complete statement or summary of the securities, markets or developments which may be referred to.

Past performance is not indicative of future performance and overseas investments are subject to fluctuations in exchange rates. The value of investments and the income from them may go down as well as up and investors may not get back what they originally invested.