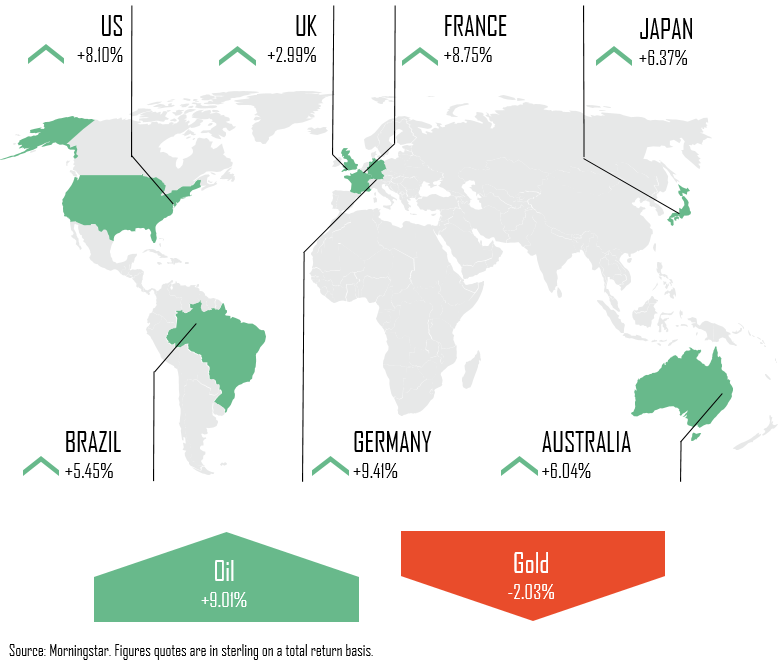 With the notable exception of China and parts of Asia, equity markets generally enjoyed a meaningful rally as investors bet on signs of Central Banks pivoting away from recent policy of aggressive rate increases. This was despite headline inflation remaining somewhat sticky in each of Japan, the US, Europe and the UK. Indeed, government bond markets did not rally like equities, with the exception of the UK where the massive rally in gilts after the historic September sell off stole the show.

The equity rally was from generally oversold levels and from levels that interested investors who are inspired by looking at chart patterns. Indeed profit releases have, in aggregate, been somewhat lacklustre with the likes of Amazon, Google, Meta (formerly Facebook) and Microsoft all disappointing investors.

Chinese equities fell by more than they ever have in a week following the close of a major Party Congress. This was primarily because President Xi did not say what international investors wanted to hear rather than because there was a big change in strategy.

Oil rallied during the month but natural gas in Europe fell as the EU has done a good job of filling its storage ahead of winter.

Sterling rallied during the month on more political stability whilst the Yen continued to hit multi-year lows. The rally in the Dollar took a breather, providing further support for risk assets.

After UK Gilts grabbed the headlines for all the wrong reasons in September they were in the limelight again in October. This time, however, it was due to a significant rally as the Truss/Kwarteng budget and market impacts were largely reversed. Even as US bond yields nudged higher, their UK counterparts performed strongly with longer dated issues delivering returns well into double digits. Ironically, because the latest cabinet is signalling it is not going to go for growth, expectations have receded as to how high the Bank of England has to raise interest rates in order to rein in inflation.

That notwithstanding, both the Federal Reserve and Bank of England are expected to raise rates by 75 basis points in November. There is then considerable debate as to what subsequent rate rises will look like as signs of slowing economies are ever more evident on both sides of the Atlantic.

The European Central Bank increased rates as expected during the month but investors detected a more dovish mood with regard to the future pace of policy tightening.

Japan, meanwhile, danced to its own tune and kept rates at rock bottom levels, even as its currency came under increasing pressure from international investors. This pressure is due to the ever widening interest rate differentials between Japan and most other countries.

Investors are hoping Central Banks ease up somewhat on rate rises as economies weaken and as we see some, but not all, inflationary pressures wane. As we go through the next six months, we expect more goods and services to see pricing pressures peak and hence bond markets should calm somewhat. That is why we are adding to fixed interest across our relevant model portfolios. We are doing so incrementally as we doubt the path to calmness will be a straight line.

UK equities enjoyed a welcome reprieve in the month, although they did not rise as much as their Developed Market Peers. Mid-caps led the way, rising by more than 4% with large caps not far behind. Continuing recent trends, small caps lagged and indeed finished the month marginally down (performance numbers from Morningstar).

Once again we were reminded why Economics used to be called Political Economy as the market waxed and waned on the back of developments as to who was going to become Prime Minister. When Rishi Sunak finally won, the fact he is considered by investors to be market friendly and financially competent enabled shares to rally, even as he warned of very tough economic conditions ahead.

Within company results, construction related companies are beginning to see some signs of deterioration although very low valuations are offering shareholders some protection.

Another notable point is that banks are generally delivering very good profit numbers but are still being punished if, within the positive results, bad debts and or costs are considered to be rising too quickly.

Excessive valuation has not been a concern in the UK market for some considerable time. We shall now see if a potentially more stable political environment enables at least some of the inherent value to be unlocked.

GDP experienced the weakest quarterly rate of growth in the three months to September since the rebound from Covid 19 restrictions in Q2 2021. Both Italy and Germany surprised to the upside while Spain and France disappointed. Despite this, Eurozone consumer confidence edged up this month from September’s lows.

Eurozone inflation accelerated to record highs, mainly driven by energy prices followed by food, tobacco and alcohol while consumer prices also increased at the quickest pace in seven months. Despite higher than expected inflation prints this month across the board, the rhetoric post another 75 basis point rate hike from the ECB was more dovish than many would have expected. This may suggest we are closer to the end of the hiking cycle in Europe and is partly on the back of some easing of the energy crisis.

Within this easing of the energy crisis, European gas prices have fallen below €100/MWH [1] for the first time since mid-June due to higher than previously expected gas storage levels and milder weather. Price declines have allowed more gas to be pumped into already higher storage with prices also helped by industry cuts in usage.

On a valuation basis Europe continues to screen cheap on a number of metrics.

The US rebounded in October despite a number of high-profile company profit warnings. The market shook off concerns that advertising spending was slowing rapidly at several of the previously revered FAANG names (Facebook, Amazon, Apple, Netflix, Google).

The cyclicality of ad spending, slowing home sales and housing starts and lower commodity prices have helped to convince investors that a change in tact from the US Federal Reserve may be in the offing. This means the Fed indicating they believe inflation is peaking and so begin to be less aggressive with interest rate hikes.

Markets have rallied on this news after selling off last month, particularly the indices less exposed to technology and more focussed on domestic US growth. This is despite flash manufacturing and services surveys suggesting both parts of the economy had moved into contractionary territory during the month.

Fixed Income markets were less optimistic as 10 year government bond yields made new cyclical highs of 4.2%, rising despite some of the weaker underlying data and reflecting the view that the Fed would continue to hike interest rates in both its November and December meetings.

Weakness in Chinese shares, and to a lesser extent, the Chinese currency dominated the headlines during the month even as Japan, Korea and India all posted respectable mid-single digit gains.

Despite Chinese Q3 GDP numbers being stronger than expected at 3.9% growth, politics buffeted the financial markets. Firstly, the US ratcheted up sanctions and controls on part of the Chinese technology industry and then foreign investors took a dim view of the outcomes from the Communist Party Congress. They were upset that China is continuing with a zero COVID policy, concerned that President Xi has surrounded himself with “ yes men” and perplexed he supposedly concentrated more on national security and wealth distribution than he did on generating consistent economic growth. This negative reaction resulted in the technology rich Hong Kong Index shedding nearly 15% and the more domestically focussed Shanghai Index falling about 5%.This compares to rises in the mid-single digits in developed markets.

Despite financial market weakness it remains a fact that the Chinese are continuing to ease policy (unlike the West) and profit forecasts there are bottoming, again unlike the West. Whilst we agree China deserves a bigger discount to the West than in the past we think the current discount is too extreme and will dissipate as the economy continues to reopen.

Elsewhere Japan eschewed the path taken by Developed Market peers by keeping interest rates at rock bottom levels. It did, however, join them in introducing policies to ease cost of living issues facing households.

The latest US Energy Information Agency (EIA) report showed that US crude stocks fell by about 3.1 million barrels last week, which is far below the expected build-up of 367,000. This decline in US crude inventories means demand is still strong for the commodity and this has pushed prices to levels not seen since the start of the month. However, pressure remains on oil prices as a world recession becomes ever a reality. On the supply side, OPEC+ recently agreed to cut production by 2 million barrels per day, the most since the start of Covid. Some investors speculate that the group will further cut production to increase prices.

Elsewhere, gold is still hovering close to its early 2020 lows, primarily due to rising rates increasing the opportunity cost of holding non-yielding bullion.

Finally, by the end of the month, UK natural gas futures were trading below 300 pence a therm which is more than half the record highs of 640 pence a therm in August of this year [2]. The fall is due to three main reasons: weaker demand, comfortable storage supplies, and efforts from the government to curb soaring prices.

The major news for the UK property market was the report issued by the Nationwide Building Society which showed that house prices dropped by 0.9% in October. Despite being higher than the year before, this was far worse than many economists had expected. House prices have come under demand-side pressure. In 2020 house prices surged as demand increased due to higher savings and work-from-home initiatives. However, rising mortgage rates and the cost of living crisis has put significant restraint on demand, especially on first-time buyers.

Economists and investors have a similarly bleak outlook on the property markets of other major economies around the world, especially the US where the 30-year mortgage rate reached upwards of 7% this month [3].

Note; All figures are sourced by Morningstar and correct to 31/10/22 unless otherwise stated