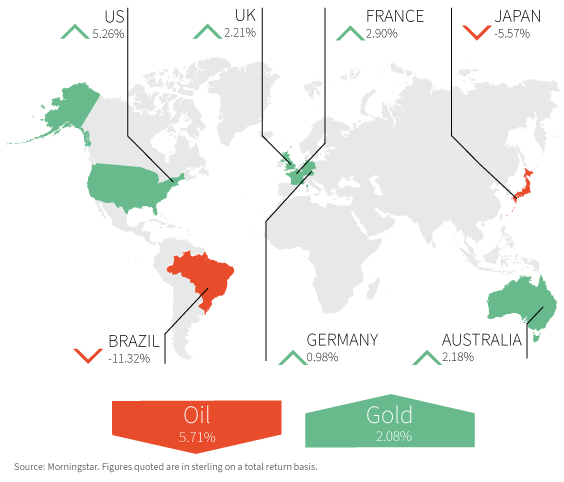 Following a weak September for most major indices, markets recovered last month as ‘animal spirits’ returned to the market. The best October for six years in US stocks was supported by equity inflows, which hit a seven-month high.

Bond markets have also been volatile, yields see-sawed, finishing the month up from where they began. Central Bank commentary was again firmly in the spotlight as the US Federal Reserve edged closer to tapering asset purchases and traders priced a UK interest rate hike for the first week of November. New Zealand joined a select few developed nations that have already raised rates.

Fuel shortages dominated headlines earlier in the month as UK petrol stations ran close to dry, easing as the month went on. In Europe, Russia increased its supply of Natural Gas which calmed both shortages and price increases.

The words ’Stagflation’ and ‘Tapering’ vied for most usage by commentators during October and thus, ensured a very volatile month for Fixed Income Markets globally. Although the month ended with bond yields higher in most major economies the majority of markets saw yields well off their highs, the UK in particular. Germany, on the other hand, had yields at their high on the final day of trading. Investors are fretting that most Central Banks (ex-ECB) are going to tighten policy too quickly in the face of price increases that are primarily due to supply glitches rather than soaring demand. The fear is that demand will be dulled but nothing will be resolved with regards the supply issues. Due to the above shortages, ending of some government support, Chinese crackdowns and Delta variant Q3 activity had already slowed significantly.

Our analysis leads us to believe that China will ease policy from here, the world is seeing Covid morph from pandemic to endemic and consumers and businesses have vast liquidity to spend when they are fully enabled to.

Furthermore, the US and European Central Banks have repeatedly stated they are in no hurry to make policy restrictive and the Chinese are about to reverse tightening whilst Japan is about to loosen again. The issue is more nuanced in the UK but the conclusion is that the global economy should reaccelerate from here.

So the rate tightening cycle will start but not to an extent that derails what is still a nascent recovery.

Unusually this occurred in a period in which Sterling appreciated noticeably against all of its major peers.

Small and mid-cap stocks tend to be more domestically focused and suffered the double whammy of negative sentiment on both the direction of Covid in the UK relative to other developed nations and the fact the UK authorities seem to be at the vanguard of raising taxes and interest rates.

The large-cap index was positively impacted by the significant weights it has in banks and oil companies. The former generally posted robust profits and are big beneficiaries of rising interest rates. Oil companies enjoyed the sharp increase in energy prices and the disappointing profits from Shell only partially offset this rosy environment.

Looking forward, UK growth is poised to rebound as booster vaccines are administered and a gradual easing of supply shortages increases availability of goods.

UK shares are still generally unloved whilst profits are in much better shape than investor sentiment!

This should enable further gains in the year ahead.

Having sold off in the latter stages of September, European equities rebounded strongly in October with large-cap tech and utilities companies leading the market higher. Strong Q3 earnings updates were a large driver of this positive performance, with a high percentage of reporting companies delivering numbers that beat expectations.

The European Central Bank acted to calm the nerves somewhat by leaving its monetary policy and guidance on inflation unchanged during the month. They continue to see the current bout of high inflation as ‘transitory’ and implied that they would not be taking any significant measures to try and curb it in the near future.

Following the worst month since March 2020, US stocks rebounded strongly in October. Large cap growth led the way as fears of a stagflationary environment took hold.

Economic releases told familiar tales of shortages and inflation but also strong domestic growth. Consumer Price Inflation rose faster than expected, this time driven by more sticky factors such as food and shelter, fuelling concerns that inflation may well be more persistent than anticipated. Industrial production and durable goods numbers highlighted supply chain constraints but retail sales, new home sales, Services PMIs and employment data all painted a more positive picture of the domestic economy. President Biden’s $1.5 trillion fiscal package remained in deadlock, although the threat of a government shutdown was deferred until December as the debt ceiling deadline was extended. Some positive soundbites emerged following further talks between US and Chinese officials, raising the prospect of improving trade and diplomatic relations.

Asian equities were better for choice during the month although the more developed North Asian markets in Korea and Japan lost money. Vietnam was the standout performer, producing double-digit returns as Covid related restrictions continued to be eased. Singapore and Indonesia also performed well, as did Hong Kong despite the ongoing saga of the Evergrande property development company in mainland China. Indeed even the Shanghai Index managed to eke out a small gain on the month.

By October, Japan will have elections and ‘States of emergency’ behind them and yet another fiscal boost to look forward to.

Many, including us, are expecting China to ease policy to help contain the spillover from the Evergrande situation as well as the government induced slowdown in the overall property market. This should mean that equities should be able to find a base soon from which to advance. Most Asian countries are now better equipped than in 2013 to withstand the Federal Reserve tapering.

Despite consolidating in the final few days of the month, oil prices continued their upwards trajectory in October, with Crude trading meaningfully above $80 per barrel for the first time in 7 years. Natural gas prices were softer however, with Russia signalling that it would send more supply to Europe next month to help ease the tightness in supply.

Within precious metals, it was an uneventful month for gold which largely traded sideways to finish close to where it started. However, silver showed greater directionality by gaining strongly, as the market digested a weaker dollar and falling real yields.

There was further evidence of UK property inflation during October as the Halifax House Price update revealed that the average house price increased 1.7% in September. This was the fastest monthly rise since February 2007 and came after the deadline for stamp duty holidays passed on the 30th September. The report also noted that house prices are 7.4% more expensive than this time last year.