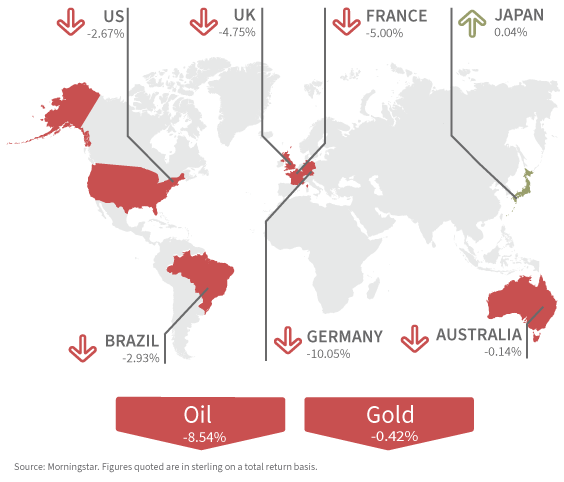 The weakness we saw in shares during September carried through into October as increasing rates of Covid-19 infections led to the re-imposition of national lockdowns in Europe, putting the economic recovery into reverse. Our view has long been that there would be a second wave and perhaps more but that by this time next year Covid would be in our rear view mirror. We positioned ourselves for this in April and have used October’s weakness to modestly reduce cash and add to our Asian exposure to take advantage of expected recovery in global trade.

The month was very much dominated by the election race for the US Presidency, won as we now know by Joe Biden, the Democrat candidate. The ability for a President to influence policy is to a great extent limited by the balance of power in the Senate and Congress which will remain unknown until January.  However, Biden’s priorities differ markedly from those of President Trump so depending on that final balance of power outcome we are likely to see some of President Trump’s more unusual policies unwound in the coming year or so.

President Trump’s anti-globalisation movement was clearly a detractor for those net exporting emerging economies, so a reversal in US foreign policy could provide a much needed reversal in fortunes for many countries. On the other hand, easing up too far may look too much like exporting more jobs and is not a vote winner for either party. Some changes are here to stay though perhaps with greater diplomacy around the language used.

There will likely be an improvement in political confidence and predictability, important market intangibles that have come under increasing strain from an erratic Trump over the course of his four-year term. Trade war rhetoric with China will likely cool, re-entering of global accords on climate and trade will benefit and distancing from dictators will reduce international tensions.

There will also likely be a larger stimulus package, to help protect the US economy from the economic impacts of Covid, leading to a weaker dollar, which typically is correlated to improved economic fortunes for emerging economies, as capital flows move from US to other markets to seek an improved return.

This is not the end of Covid-19 but it is the beginning of the end. In the short-term that provides a welcome boost, with stronger asset prices reflecting both the prospect of rising profitability and valuations that are based on ultra-low interest rates.

Fixed income markets were relatively flat in October as the prospect of the US election loomed large on investors mind. On the one hand there is the possibility of a Joe Biden win coupled with Democratic majority in the senate and congress which is seen as the likely route for greater fiscal stimulus; a prospect that is thought of as inflationary and negative for bonds. However, alternate scenarios where there is a split between the houses and the presidency are less clear and the potential for inaction as a result is likely to result in less fiscal spending and conversely less inflation which is more positive for bonds.

UK share prices reflected the global sell-off with a fall of -3.8% though we saw markedly better performance in mid cap stocks, which fell just -0.5%. In general, the news from UK corporates has been positive, with rising demand feeding through lean cost structures to generate higher free cash flow and profits.  Outside of the sectors directly hit by Covid-19 many companies have started to reduce their level of debt and announced plans to restore dividends passed earlier in the year.  We have also seen an uptick in corporate activity as stronger companies and private equity firms look to acquire undervalued assets.

Returns from European shares were particularly poor. Germany, which largely avoided the first wave of infections returned -10% as it proved that was no defence against the second while France gave up 5.0% and Italy 6.8%. In our view these falls provide an opportunity to add to holdings.

The markets continued to fall, with all three major indices down on the month. The technology heavy NASDAQ was again a big decliner, falling -3.2% in local currency as concerns regarding the valuation and regulation of the largest technology players came to the fore. The broader S&P 500 and Dow Jones were also down. Uncertainty about fiscal policy, as a new stimulus package was delayed, and political concerns around the Election, weighed on investor sentiment. Clarity around the election result, and future monetary and fiscal policy, as well as an improvement in the COVID situation, would restore investor confidence.

Emerging Markets ended October slightly lower, however have since rebounded to a two-year high as a result of US President Elect – Joe Biden – defeating the incumbent President Trump. At the time of writing it is important to note that this decision is being challenged, but with little likelihood of success.

This may benefit emerging markets in the immediacy, however global markets in general have typically preferred a US legislative system with some checks and balances to remove the risks of a US leaning to far left or right.

As ever, country positioning will be key and a particular focus in our upcoming Collectives Committee meetings. Countries such as Russia, Saudi Arabia, Brazil and Turkey will surely move out of favour whilst China and Hong Kong will benefit.

It will take time for markets to adjust from sentiment to fact, as Biden’s policies begin to take form, however it is clear to see that emerging market investors are buoyant by the Biden win.

The increased coronavirus restrictions in the UK and subsequent national lockdown were a further blow to the UK property market with the retail and hospitality sectors forced to shut for November. There is value beginning to appear in the sector but the outlook remains extremely uncertain.

The infrastructure sector in the UK performed especially well within alternatives in October. This sector has a high level of government-backed contracted income from and this is becoming increasingly in demand from investors given the extremely low yields available on government bonds in the UK and globally.