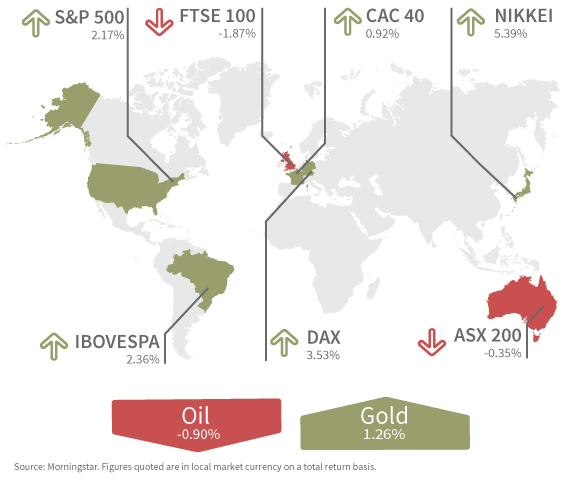 The positive momentum in global equity markets continued through October as the US Federal Reserve Board cut interest rates again and put in place a program to buy short term Treasuries.  This and similarly loose monetary policy in Japan and Europe continued to drive investors from negative yield and low-yield fixed interest assets into higher risk in a repeat of the effect we saw immediately after the 2008 financial crisis.  As we saw then, low rates not only caused an upward rerating of equities but stimulated economic activity and by extension corporate earnings. Equity markets took off.  While it makes sense to back this horse again, ‘Don’t fight the Fed’, ultra-low interest rates are a symptom of slower global growth that will see US companies report lower profits this year than last. Cheap money in a world where money was already cheap will not have the same degree of impact.

For UK investors global returns were more than offset by the strength of the pound which recovered recent losses against both the US dollar and Euro as the threat of a no deal Brexit diminished and as a new deal was struck.  International investors who considered the UK ‘univestible’ are at last beginning to return but while shares exposed to our domestic economy has a positive month, returns from global equities were negative at -2.1%.

The US Federal reserve cut interest rates for the third time this year in October after citing weak economic data and trade tensions as the root causes. The market had largely priced in the move but the chairman, Jerome Powell also commented that the current level would “likely remain appropriate.” Indicating that further cuts are not planned in the near future.

Elsewhere, Mario Draghi departed as President of the ECB and Christine Lagarde officially took over on the 1st November. She is expected to represent continuity in terms of monetary policy but the appointment does represent a move towards a more political ECB.

October was a negative month for UK equity markets, with the UK top 100 and all UK shares indices falling -1.87% and -1.40% respectively. Energy, Consumer Staples and Materials stocks, which account for roughly half of the main market, were the biggest detractors over the month. Sterling surged 5.31% against the US dollar, a rise which proved to be a headwind for Companies with sizeable USD earnings.

The UK Manufacturing PMI rose to 49.6, well ahead of an expected of 48.1. Despite being at a 6 month high a reading below 50 still indicates contraction in the underlying sector. Brexit, political uncertainty and slow economic growth continued to weigh leading to falls in output and new orders. October saw the seventh consecutive month for jobs losses as companies cited weaker demand, softer confidence alongside redundancies and no-replacement of leavers over the period. For the first time in three and a half years input prices didn’t rise which helped to alleviate price pressures.

UK House prices rose 0.40% year on year to October, with the average home costing £215,368 according to figures from Nationwide. With this modest uptick and wage growth in the UK currently at 3.8%, it means affordability is improving albeit slowly. Despite sale completions and mortgage approvals remaining stable the further delay of Brexit is likely to keep the UK housing market in a holding pattern in terms of price growth for the foreseeable future.

Although far from concluded we have seen progress with regards the UK’s expected exit from Europe and as such initial shoots of confidence for more domestically focused businesses which have seen valuations challenged as a direct result of Brexit.  As such we’ve recently increased our weighting to UK equities with a particular focus on seeking value in domestically focussed businesses.

With the exception of the German DAX Index which rose 0.90%, it was a negative month if you were a Sterling investor in any of the main European markets; France’s CAC lost 1.65%, Italy’s MIB lost 0.38% and Spain’s IBEX lost 2.39%. The Euro Stoxx 50 composite index fell 1.80% over the same period.

According to figures from Eurostat – the EC’s statistics agency – the Eurozone economy grew 0.20% in the three months to September, and at an annualised rate of 1.1%. There had been fears of a further slowdown in the growth rate due to global trade tensions and the ongoing Brexit saga with the UK. Estimates put GDP growth for the bloc at 1.0% for 2020 and 1.30% for 2021.

The ECB bid farewell to Mario Draghi, who in his last meeting as President retained the interest rates on the main refinancing operations, marginal lending facility and deposit facility at 0.0%, 0.25% and -0.50% respectively. Eyes are now on incoming President Christine Lagarde, who inherits a Eurozone inflation rate of 0.70% which is likely to keep rates at their present level or possibly lower.

We remain cautious on European Equites and will remain so until there is more clarity on Brexit and global trade headwinds.

The equity market enjoyed a strong month, reacting to a further easing in monetary policy by the Federal Reserve Board. In addition to  lowering its  key funds  rate, the Fed introduced a programme to buy in short term US Treasuries , thereby injecting further liquidity into the financial system .The improvement was broadly- based, but the  NASDAQ was the best performing index, returning 5.8% as sentiment improved towards the technology sector. The more cyclically exposed Dow returned 2.7%, whilst the S&P, which has large exposure to financial shares, rose by 4.06%. Sterling improved against the dollar, slightly reducing the return for UK investors.

Whilst economic data remains mixed with a bias towards the downside, markets remain in constructive mood as interest rates continue to fall, providing a supportive background for equity investing. Potential threats remain, for example the on-going trade dispute with the China and the valuation of certain technology sub-sectors, but for now markets are retaining a positive bias.

The Bank of Japan left its key short-term interest rate unchanged at -0.1% during its October meeting while giving a stronger signal it may cut interest rates in the near future to support growth. The decision was made just hours after the Federal Reserve lowered rates for the third time this year but signalled a pause in further easing. Policymakers also kept the target for the 10-year Japanese government bond yield at around 0%. Data released by the Japanese Bureau for Statistics showed that the unemployment rate climbed to 2.4% in September 2019, rebounding from a record low originally set in October 1992 and topping market expectations of 2.3%. The jobs-to-applications ratio fell to 1.57, the lowest since November 2017 and below market expectations of 1.59.

The number of unemployed was unchanged at 1.68 million in September, an increase of 60,000 workers or 3.7% from the previous year, whilst employment grew by 530,000 additional workers over the past year to an overall employment level of 67.68 million people.

Retail sales grew at the strongest pace in 5½ years in September as consumers rushed to buy big-ticket items to beat a rise in the country’s sales tax, raising concerns spending could pull back sharply in the coming months. The increase in the consumption tax from 8% to 10% effective as of 1st October is seen as crucial for fixing the industrial world’s heaviest public debt at more than twice the size of Japan’s economy.  Japan’s manufacturing activity slumped to a more than three-year low in October, amid weak economic conditions that were exacerbated by the sales tax increase and deadly typhoon Hagibis that claimed 74 lives.  The latest IHS Jibun Bank manufacturing purchasing managers index yielded a reading of 48.4, its lowest level since June 2016. It was also the sixth straight month that the index has come in below 50, the line which marks expansion from contraction. The reading was also down from 48.5 in September.

In October the Nikkei 225 experienced a strong month of positive equity returns, generating 6.90%. Shares backed by strong earnings, including electronic parts producer Murata Manufacturing and game maker Nintendo, have seen renewed interest and strong trading volumes following encouraging statements. Nintendo emphasized a better than expected operating profit for the April-September half whilst Murata Manufacturing revised up its consolidated operating profit forecast for the year to March 2020. However, China-linked names have met with selling amid renewed uncertainty over US-China trade friction, including construction machinery maker Komatsu and industrial robot producer Fanuc.

The Emerging Market index had a strong month, rising 5%. This could be down to the moderation of the larger risks facing the global economy according to Deutsche Bank Chief Economist Torsten Slok: A willingness for China and the US to dampen ‘trade war’ rhetoric, a dollar decline that would alleviate pressure on EM economies and to a lesser extent a Brexit resolution all now seem to be moving closer.

There have been a lot of moving parts in the UK property market in 2019 with the combination of Brexit, interest rate moves and also challenging conditions in the retail sector. The market has become more optimistic recently though on the decreasing likelihood of a ‘no-deal’ Brexit which has helped drive positive performance in October. However, caution is undoubtedly required with a general election looming as the political situation could change quickly.

The price of gold has been relatively range bound in recent months following the sharp rise through the summer from the $1,200’s up to the $1,500’s. Despite this move, our long term outlook for gold still remains positive as it can provide protection against geopolitical shocks and continually weaker monetary policy.

The opinions expressed in this communication may differ or be to the contrary of those expressed by other individuals within the WHIreland Group and they are subject to change without notice.

We have issued this communication for information purposes only and it does not constitute financial, professional or investment advice or a personal recommendation, nor does it constitute a solicitation or an offer to buy or sell any securities or related financial instruments in any jurisdiction. No representation or warranty, either expressed or implied, is provided in relation to the accuracy, completeness or reliability of the information contained in this communication, nor is it intended to be a complete statement or summary of the securities, markets or developments which may be referred to.

Past performance is not indicative of future performance and overseas investments are subject to fluctuations in exchange rates. The value of investments and the income from them may go down as well as up and investors may not get back what they originally invested.