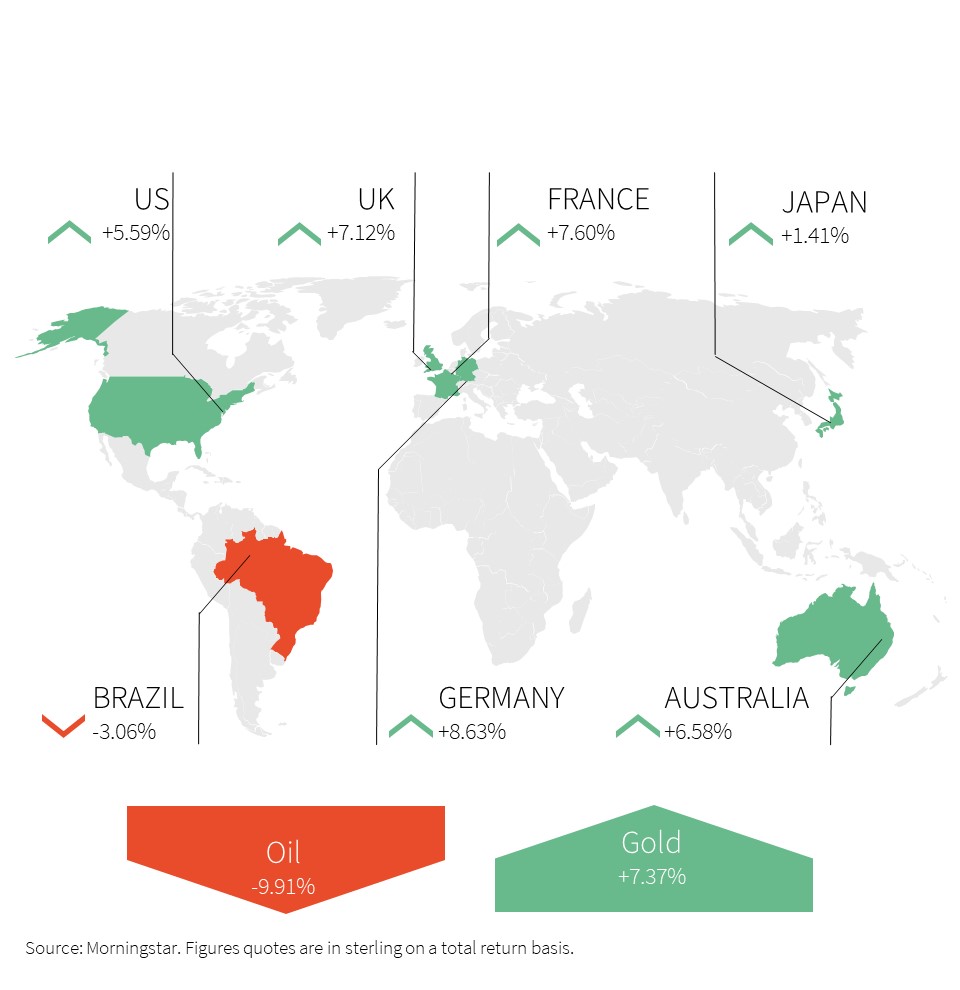 Markets enjoyed a second consecutive month of positive returns with all major asset classes posting good figures. Despite some mixed economic numbers and increasing evidence of a global slowdown, investors were buoyed by falling inflation numbers and the feeling that Central Banks (particularly the US Federal Reserve) would slow the pace of interest rate increases.

This led bond yields down and equities up, with ex-US investments also helped out by a weakening US Dollar. Asia benefitted especially, aided by signs that the strict Chinese Zero-Covid policy was beginning to loosen and that Chinese policy would continue to ease. A cut in the reserve rate for banks in China was enacted and regulation on gaming companies appeared to loosen.

Oil prices fell back to levels last seen in 2021 and helped to facilitate a fall in inflation. This even prompted rumours that OPEC may enact an output cut to support prices. Prices are now down around a third from the summer highs.

We move into December with favourable seasonality but weakening economic numbers and still elevated levels of inflation. Although the latter is expected to continue to decline, markets are likely to remain volatile as they assess the severity of the global slowdown, the terminal level of interest rates and the pace at which inflation slows.

Bonds across the globe rallied as a lower than expected core inflation number in the US calmed investor fears about ever rising interest rates. Furthermore, weak US housing data, declining UK mortgage applications as well as a slew of sub-par Chinese data entrenched investor conviction that an economic slowdown was underway and that inflationary expectations would ebb as a result.

Falling energy prices are significant contributors to this view, be it European gas prices or Brent Crude Oil.

Whilst we must be aware that any inflation print above expectations in the coming months will likely cause short term investor angst, we are of the opinion that we are past peak worry about inflation. The other potential contributor to volatility is likely to be Central Bank officials implying that they will keep raising rates more than the market expects. This could mean long term yields fall even further below short-term yields (the opposite of what is normal), despite the fact in the US this phenomenon is the widest it has been since 1982.

Whilst the potential for volatility still exists, we expect bond markets to be less challenging over the next twelve months than they have over the last twelve. We are therefore ready to add selectively on weakness.

UK equities enjoyed a strong bounce in the month, with the large and mid-cap indices up high single digits, with small caps only a little behind. The new Chancellor managed to keep investors onside as he delivered nearly £55 billion in deficit reduction plans whilst actually pushing back on the dates that austerity will set in until after the next General Election.

With gilt yields falling and Sterling strengthening, investors were encouraged back into the asset class which has screened cheap for a while but which has been held back by macro concerns.

Mortgage rates have fallen back from recent highs and generally sluggish economic numbers have eased concerns a little about how high interest rates will have to go.

So despite widespread acknowledgement the UK is in, or about to enter, a recession investors are beginning to look “over the valley” in a way they haven’t so far this year.

Europe continued its strong performance from October up mid-single digits this month. A weaker US CPI print buoyed markets generally and Europe benefitted as a result.

Inflation eased more than expected with both the cost of energy and services slowing within these numbers. France was one exception where inflation remained unchanged. This has fuelled market hopes that the European Central bank will slow the pace and magnitude of interest rate hikes as inflation appears to be rolling over. Euro area PMI’s also edged higher in November which helped alleviate some growth fears. However, the risk of a sharper contraction in European output should the weather turn much colder remains, after a mild start to the winter.

German Q3 GDP was boosted by strong household consumption and came in ahead of expectations. This has been taken well by the markets and could be seen as leading to a slightly worse recession than previously expected.

The continued weakening of the dollar will support risk on and help some of the smaller domestic facing companies.

US markets were up strongly in November as stocks benefitted from a cooling in US central bank inflation rhetoric. Expectations were baked in for a smaller interest rate increase in December which pushed bond yields down, helping equities to perform positively.

Economic data has continued to be mixed, with some signs that the economy is beginning to slow countered by strong retail sales numbers that indicate the consumer remains resilient. Activity surveys for both Services and Manufacturing have fallen into contractionary territory and housing starts have fallen alarmingly. New home sales, a smaller portion of the housing market, unexpectedly rebounded strongly, however, existing home sales posted their ninth consecutive month of declines.

The US market on the whole remains more expensively valued than other developed and major emerging markets (with the exception of India) and earnings expectations for next year are yet to fully reflect recessionary concerns. We continue to believe that this combination means the US market will be a difficult place to make money on a twelve month view as economic data is likely to deteriorate as the effect of interest rate increases this year are felt.

How narratives change in stock markets! Despite a worsening COVID situation in China investors suddenly started thinking that this would lead to an acceleration of vaccinations among the elderly and that the gradual opening up program would continue. This, combined with a 16 point program to help the beleaguered property sector and general interest rate cuts buoyed previously downbeat sentiment. As a result, Hong Kong equities soared off of multi-year lows, returning nearly a quarter on the month. Most other Asian markets, with the exception of Jakarta, joined in the party with advances mostly in the mid to high single digit range. Wider sentiment was helped by an easing off in both US bond yields and expectations about the rate of future interest rate increases.

Asia has some great companies and as we have said in recent months, economies there have not been blighted by inflation to nearly the same extent as their Western counterparts.

Therefore, as sentiment improves Asian assets should be set fair.

Oil prices fell significantly in November as a global economic slowdown became increasingly entrenched in investor thinking. A relatively mild start to the European winter also contributed to the sentiment that demand may not be as strong as previously feared. Towards the end of the month there was respite as Chinese reopening and potential OPEC production cuts fuelled a moderate rebound in prices.

Elsewhere, investors are increasingly expecting a slowdown in the Fed’s interest rate hikes. One of the impacts of this would be the weakening of the dollar; in the anticipation of such an event, investors have begun to find a safe haven in gold. As a result, gold prices have crept up in the latter parts of November and are expected to remain strong.

The latest Nationwide House Price Index showed that annual UK house price growth slowed to 4.4% in November, down from 7.2% in October. The recent slowdown has been a result of the fallout of the mini-budget given interest rates on mortgages remain high. Therefore, whilst the cost of living crisis has been chipping away at demand momentum since early this year, the impact of rapidly rising mortgage rates following the September mini-budget has threatened to derail it completely.