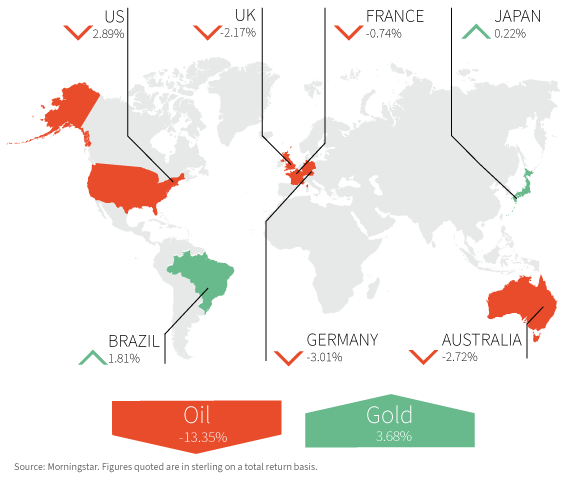 Covid 19 returned to the forefront of investors’ minds in November as the emergence of the new Omicron variant in Southern Africa resulted in travel restrictions and threatened further constraints. Even prior to the discovery, new waves of the virus were causing concern, particularly in Europe. Austria became the first European nation to return to lockdown, after briefly flirting with a lockdown only for unvaccinated citizens. German hospitals also struggled to cope and a recent survey suggested that around three quarters of the population expected a return to lockdown within the next month.

Elsewhere, leadership and policy was in the limelight as a watered down version of Biden’s infrastructure bill was passed and Federal Reserve Chairman J Powell was reappointed for a second term. Chinese leader Xi Jinping pushed through historic regulation allowing an indefinite term as President and in India, Prime Minister Modi dramatically repealed controversial agricultural laws. A three-way coalition agreement was reached in Germany, with Olaf Scholz of the Social Democrats taking over as Chancellor from Angela Merkel after 16 years at the helm.  Finally, COP26 concluded with a historic agreement, the first of which to explicitly agree to reduce coal consumption.

By the end of the month government bond yields had fallen precipitously across most of the globe as investors reacted to the discovery of the Omicron strain of Covid.

Yields in Europe had already fallen earlier in the month on Delta variant consequences but yields in the US and some of Asia Pacific were actually moving slightly higher until very late November. In the US it was because of economic strength accompanied by belief that American Authorities will not readily impose restrictions which will hurt the economy, unlike Europe. In Asia Pacific it was because interest rate rises are already happening or imminent.

Gilt yields were at the forefront of the fall due to a combination of the Bank of England not raising rates as implied, fear of Article 16 being invoked and of course, both Covid worries.

Whilst it is impossible to know the short term consequences on economic activity, lessons learnt from the last two Covid outbreaks imply that economies will quickly recover when restrictions are lifted. Vaccinations and roll out of oral therapies are also likely to soften the blow to populations and economies alike.

A confluence of Covid, Brexit and Bank of England worries combined to send UK shares of all market caps sharply lower over the month, with more cyclical shares naturally faring worst. Banking shares were hit especially hard as the Bank of England backed away from an interest rate rise that investors had already priced in. Energy shares also suffered due to renewed travel restrictions and several countries releasing (very small) amounts from their strategic reserves in an attempt to force the price down.

The market at the moment is largely ignoring strong economic and inflation data and is instead concentrating on potential problems of the type mentioned above. This has created some compelling opportunities which will be realised as most of these concerns abate in the months ahead. Even inflation should peak in the very near future, allaying fears that the Bank of England will need to prematurely end the recovery.

November was a deeply negative month for global equities and Europe was no exception. The broad market index was down more than 2% in local currency terms, with the region’s most economically sensitive companies bearing the brunt of the selloff as Covid fears returned to the market.

While the world awaits more data on the Omicron variant, Europe has already been feeling the effects of a spike in new infections, with much of the continent reintroducing Covid restrictions in November. Its largest economy Germany has introduced strict measures to prevent unvaccinated citizens from entering certain public spaces, while other nations like France have introduced new measures for unvaccinated travellers to quarantine on arrival.

While it remains to be seen how these recent events will impact on economic activity, the most recent data releases have been robust. Composite PMI numbers were market positive in November and eased some concerns about a slowdown in the recovery. Inflation remains the elephant in the room however, with preliminary numbers suggesting a reading of 4.9% for the Euro Area this month, well ahead of expectations of 4.5%.

Most US markets ended the month down as fears about slowing growth were compounded by the shock at the end of the month that a new, potentially more transmissible Covid variant has been discovered. Consequently, small and mid-cap stocks were the worst hit, particularly those within the recovery basket. Despite several significant profit warnings, technology was the one positive as it continued to outperform in the face of falling bond yields.

Earlier in the month, speculation returned to markets as non-profitable and concept stocks rallied. Economic data was, in aggregate, not too bad, although consumer surveys suggested that inflation is beginning to be felt. President Biden passed one of the biggest US infrastructure bills for decades just as inflation increased to 30 year highs.

Concerns about Covid in Europe and the announcement that the Fed were to begin tightening pushed the Dollar higher. A broad measure of dollar strength suggested that it has not been this strong against other currencies since July last year.

Most Asian Markets could not escape the widespread malaise in equity markets although Shanghai eked out a small gain whilst Taiwan and especially Vietnam, produced outstanding returns. Prior star India lost some lustre as, in addition to general worries, the government performed an unexpected U-turn on some historic agriculture reforms following widespread farmer protests. This was interpreted by some investors that the pace of reform in general would slow thus diminishing future returns. Whilst this is not great news many other significant reforms have been enacted that should underpin strong growth in future years.

Hong Kong continued to suffer on property and regulatory woes. There are signs that the Chinese government are easing up on both fronts and this should help Hong Kong especially but Asia in general over the next year.

Elsewhere Korea was hit as the Central Bank enacted another rate hike.

It should be noted that most of Asia is at, or close to, the end of a policy tightening cycle (unlike the West) and policy is, if anything, likely to ease as 2022 progresses.

November saw a marked pullback in commodity prices, with oil in particular falling over 16% as fears of a new variant sparked an aggressive selloff in the market. Prices had been consolidating prior to the news, as President Biden committed to doing all he could to ease the pricing pressures, including a coordinated release of oil reserves globally.

Within precious metals it was a highly volatile month, as gold rallied strongly on the release of a 30-year high inflation print in the US. The news caused real interest rates to fall even further negative, reducing the attractiveness of alternative assets like treasuries and proving a tailwind for the yellow metal. However, all of these price gains were reversed in the latter stages of the month, as the news of the new variant broke.

UK house prices continued their tear as figures were revealed showing that October was the fourth consecutive month of house price increases. Data suggested that this year may be the busiest in 14 years for UK home owners, with more than 6% of homes set to be exchanged this year.