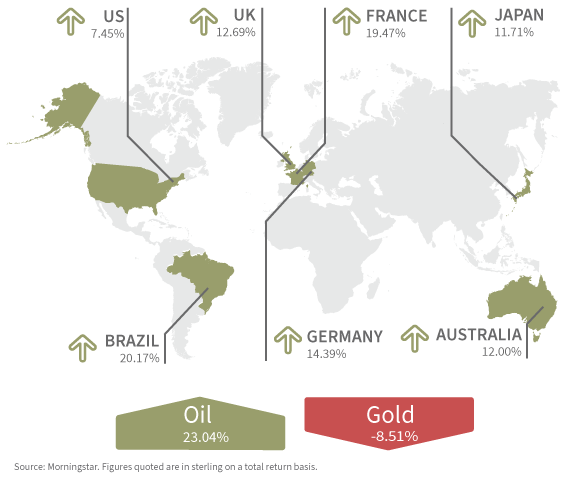 Stock markets around the world surged in November on the announcement of three highly promising Covid-19 vaccine trials and as uncertainty over the outcome of the US Presidential election was removed. For a sterling investor, the UK stock market returned 12.7%, European markets (ex the UK) 13.4%, and the US 7.4%. On the downside, we saw longer-dated UK Gilts surrender 0.7% and gold 8.5% as investors rotated away from defensive assets.

We took the view many months ago that by autumn next year the medical crisis caused by Covid-19 would be in the rearview mirror and that life would largely have returned to normal for most of us. So over recent months, we have positioned our Navigator model portfolio service to take advantage of that, though we have retained our focus on quality and long-term growth. While the end of the medical crisis may be in sight the same cannot be said for the damage to the finances of nations, businesses, and individuals alike and how that will play out over the coming years. The true cost of suspending economic activity for so long is about to become clearer and will touch us all.

Moving on to other events, the election of Joe Biden as President-elect offers the prospect of substantial US policy change in a number of important areas and of a more diplomatic tone from the leader of the free world. The extent to which he will be able to implement change will depend on whether the Senate joins Congress in having a Democrat majority or not, which will become clear in early January. Whatever the outcome there are elements of President Trump’s policies that are here to stay, perhaps the most important of which is the changed attitude to global trade and China. The language may become more diplomatic but putting American interests first, perhaps best summed up by the popular slogan ‘Make America Great Again, leaves little wiggle room for the new President to suddenly change direction.

Finally, December will see the uncertainty around final exit terms on which the UK leaves the EU, some three and a half years after voting to do so.

November’s gains have been truly remarkable and will not be repeated. But we expect stock market momentum to continue into 2021 as business conditions and improve and while interest rates remain at emergency lows and governments continue to deliver rescue packages.

The news of a vaccine resulted in small losses in value to government bonds due to the increased expectation of inflation as restrictions are eased. However corporate bonds, which lend money to companies rather than governments, gained in value as the risk that companies might default decreased. The largest increases in value were in the sectors most affected by the pandemic with travel and leisure the standout example.

With its large service sector, the UK was hit harder than many countries by measures aimed at reducing infection rates by cutting down all but the most essential ones. News of the vaccine sparked a strong rally that saw the stock market return 12.7% with strong gains in travel and leisure, oils, and banks as investors finally had enough information to estimate when they might move back into profit. Longer-dated government bonds, those over 15 years, returned -0.7% bringing the total lost over the past 6 months to -5.3%.

The rapid rise in Covid-19 infections in recent months had seen the re-imposition of strict lockdowns across much of Europe, including Germany which had avoided the worst effects of the first wave of infections. The resulting weakness in share prices provided scope for exceptionally strong returns as investors panicked back into the stock market, with returns reaching 25.1% in Spain, an impressive 19.5% in France and 14.4% in Germany. The gains came despite the continued failure to agree on a financial rescue package, held back Poland and Hungary’s insistence that it should not be tied to specific political conditions.

This was a very strong month with all major indices ahead by double digits on the month. The broader market returned 7.4% to sterling investors and technology stocks delivering 7.6%.  Gains in local currency were higher, the US dollar falling as the attraction of the US as a safe haven diminished and the appetite for global risk increased.

The immediate catalyst was the announcement by Pfizer Inc. of a viable, tested Covid-19 vaccine which could be deployed relatively quickly to tackle the virus. The market rallied sharply as investors began to factor in an end to lockdowns and restrictions, which have inhibited economic activity and suppressed market valuations.

After such a sharp relief rally the market is likely to consolidate as the logistics around the delivery of the vaccine are trialed and tested, and the financial impacts and costs of the pandemic are still being felt.

November saw gains across emerging markets as the threat of Covid-19 diminished.  While areas such as Brazil saw impressive gains, with a return of 20.2% the broader indices returned 4.8% to a sterling investor.

The divergence of returns largely reflects the relative calm experienced by Asian stock markets this year that resulted from their more effective and practiced strategies to contain the virus and from their far greater reliance on manufacturing.

The property market is one that gets a much-needed boost from news of a vaccine as the retail and hospitality sectors stand to benefit in particular. Over the coming months, it will also be extremely interesting to see how companies’ use of office space and working from home adapts once there are no longer restrictions in place.

The vaccine results were positive for almost all asset classes in November but there was one notable exception within alternative assets, which was gold. The precious metal lost over 5% in US dollar terms through the month, not overly surprising as typically it performs well in times of uncertainty and the opposite when this is reversed.