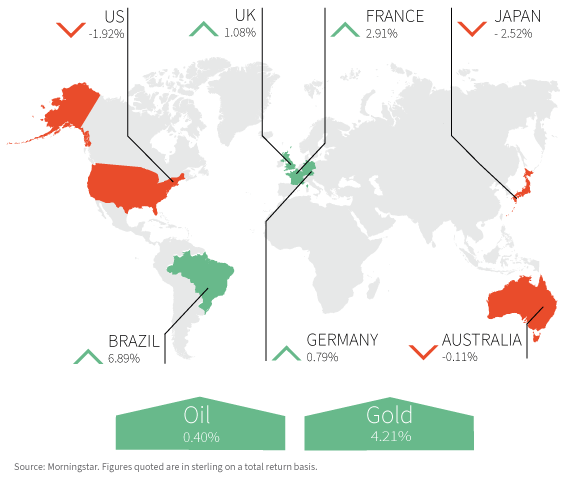 May saw global equity markets deliver positive returns almost without exception, with many closing at recent highs. Global shares returned 1.6% in US dollars but the strength of sterling reduced gains for UK investors, leaving them in modestly negative territory at -1.1%.On a more positive note, UK shares returned 1.1% as investors sought out better value assets including energy shares, which are well-represented in the UK. This move was mirrored in energy markets, with the US dollar price of Brent crude oil rising 3.1% and in precious metals by a 7.0% rise in the US dollar price of gold. Broad commodity index prices also rose, by 2.7% in US dollars.

Although much diminished by the efforts of the Federal Reserve and other central banks, inflation remains more than a lingering concern for most investors. The immense fiscal stimulus supporting the US recovery continues to feed concerns around inflation and the Consumer Price Index (CPI) rose 4.2% from a year ago, its fastest pace in more than 12 years. Despite that the month saw positive returns for fixed interest for the third successive month as the central banks continued to calm nerves over the longer-term inflationary outlook. Long-dated UK Gilts returned 0.7% in May, making the 3 month return 2.0%.

Estimates for June US CPI inflation are running at 4.7%, though this falls to 3.0% at a core level. In common with other investors, we see the current inflationary pressures as transient, caused largely by the base effect of the slump in economic activity last year, supply chain issues, tight stock control, pent-up demand, and for most, available cash. However, while that base effect will start to drop out over the coming months some upwards pressure is going to remain. In reality, most investors are really debating whether it stays as low as it did for the decade after the Global Financial Crisis when it was persistently well under the 2.0% target, or whether it climbs modestly above target for a while, which used to be considered normal.

Inflation targeting has been very successful over the past two decades and there is a high level of public confidence that inflation will remain under control. There will be exceptions short term, for example, housing and car prices, but we don’t see goods price inflation becoming a serious problem though service sector inflation may prove more persistent – as it has been throughout the inflation-targeting era.

In a subtle change last year, the US Federal Reserve Bank target was changed to average inflation of 2% inflation rather than 2% itself, relaxing the pressure to constrain inflation. That, and last year’s massive efforts to avert deflation show the extent to which central banks are strongly pro-inflation: Just not too much.

Our response remains to stay underweight fixed interest and modestly overweight equities, in particular resources and financials – which will benefit from modestly higher interest rates.

Fixed Interest returns were generally positive in local currencies, marking the third month of successive gains as the Fed continued to manage down investor concerns over inflation and rate rises. Longer-dated UK Gilts returned 0.7% making the 3 month return 2.0%. The one year return of -13.1% shows the extent of the market’s shift away from last year’s fears of deflation and negative interest rates but also provides a reminder that longer-dated fixed interest bonds and assets priced off them – which include index-linked bonds – have the capacity to be extremely volatile and to incur large losses in what many consider a safe asset.

In the US,  Treasury yields retraced this quarter with the 10-year ending May lower, at 1.59%. Inflation accelerated meaningfully in April, while the Fed reiterated that it would be some time before the central bank considered raising its policy rate – even if the discussion about tapering QE could begin soon. It is, so to speak, now talking about inflation.

UK shares returned 1.1% in the month, taking the gain to 23.1% over one year as the outlook for sales and corporate profits continued to improve on the back of the rapid rollout of the Covid vaccine.  The strength of the upturn in the economy was demonstrated in the continued strength of the Purchasing Managers Indices, with the manufacturing PMI reported at 65.6 and services PMI at 62.9.  Readings above 50 indicate growth.

We remain supportive of UK shares though many now discount the domestic recovery. Many international investors avoided the UK in the uncertainty that followed Brexit, leaving equity valuations low. The market is also well-represented in the sectors we favour, resources, and financials.

Europe ex-UK returned 1.7% during May, making a total of 26.4% over one year, modestly ahead of the UK. The effect of the slow vaccine roll-out was again apparent in the Services PMI which was reported at 55.2, significantly below the US and UK. Under normal circumstances, such a number would be very acceptable and as the roll-out picks up we would expect greater strength to be seen in the numbers.  The Manufacturing PMI was in line with the US and UK and again, we would expect these to decline over time.

The broad market returned 0.7% in US dollars and a negative return of 1.9% in sterling. Technology shares, very much the driver of returns last year, returned a negative -3.7% to make the 12 month return for a sterling investor 25.5%. That is significantly below the 44.3% returned in US dollars and illustrates not only the importance of currency returns but also in volatility.

The economy is experiencing exceptionally rapid growth as firms reopen and this was reflected in the services PMI, which was reported at 70.4. The Manufacturing PMI remains a very strong 62.1. These figures are exceptionally high, will fall back as the pace of re-opening slows, and have largely been expected by markets.

Asian markets returned a negative -1.4% in May on inflation concerns and fears that the US will start to roll back stimulus earlier than expected. It is reported that earnings upgrades are slowing and valuations still remain relatively high in some growth sectors, particularly technology. Having enjoyed a relatively small impact from it last year the virus remains another cause for concern for Asian investors, with fears of a return to the lockdown-like restrictions in Singapore rising during the month. At the same time, India, Japan, and other parts of Southeast Asia are also batting a fresh surge in cases and tightening restrictions.

Having recovered sharply from last year’s lows property continues to attract interest from longer-term and strategic investors.  While demand for distribution assets, particularly for the ‘Last Mile’ remains strong investors are looking more closely at last year’s under-performers including retail and leisure.

After a period on the doldrums, gold gained 7.0% over the month in US dollars and 4.2% in sterling.

Disclaimer: The opinions expressed in this communication may differ or be to the contrary of those expressed by other individuals within the WHIreland Group and they are subject to change without notice. We have issued this communication for information purposes only and it does not constitute financial, professional or investment advice or a personal recommendation, nor does it constitute a solicitation or an offer to buy or sell any securities or related financial instruments in any jurisdiction. No representation or warranty, either expressed or implied, is provided in relation to the accuracy, completeness or reliability of the information contained in this communication, nor is it intended to be a complete statement or summary of the securities, markets or developments which may be referred to. Past performance is not indicative of future performance and overseas investments are subject to fluctuations in exchange rates. The value of investments and the income from them may go down as well as up and investors may not get back what they originally invested.