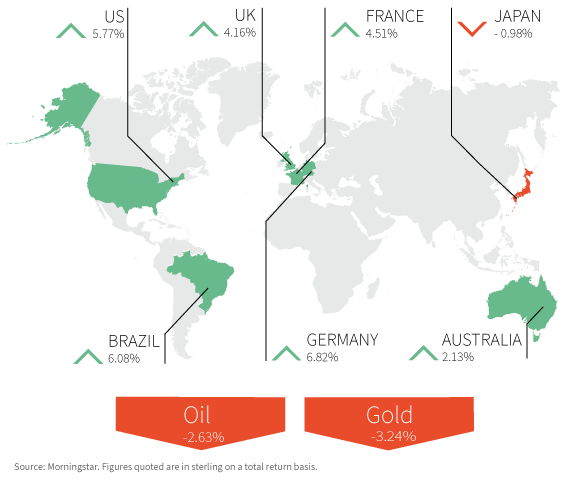 March saw further gains in global stock markets as investors reacted positively to the surprisingly rapid rollout of Covid-19 vaccines in the US, UK, and elsewhere and the launch of substantial economic stimulus packages aimed at ensuring recovery. Global shares delivered an investment return of 4.7% to a sterling investor, the US leading the major markets with a return of 5.8%, Europe 4.7%, and the UK 4.2%. Oil and other commodities gave up ground while fixed interest ended broadly level. Gold, very much a beneficiary in times of crisis continued its drift lower, surrendering another 3.25%.

A year on from the height of the uncertainty created by the pandemic, the path to normality has not only been set, we are now a long way down it.  In the short term, markets will react to the ebb and flow of current news, for example, new variants of the virus and speed of vaccination programs, but it is reasonable to expect that by this time next year normality will largely have been restored. Though in the future ‘normality’ will also include systems and controls aimed at preventing a repeat of the damage to western economies caused by any similar threat in the future.

That is not to say that it will be a return business as usual for financial markets or commerce. The pandemic has accelerated many trends that were already in place but also came at a time when many others appeared to be at an end.

One that looks certain to fall victim to the pandemic is ever-lower inflation. Many readers will recall the eighties’ focus on controlling money supply growth in order to bring inflation under control.  Today’s economic recovery packages aim to do precisely the opposite – to ensure the economic recovery is strong and, if it falters, to provide yet more money. While a successful, growing economy is imperative for re-election, governments are also major borrowers so have a further incentive to see inflation above the 2% target – money borrowed today will be repaid decades later with money that is worth considerably less.  The various economic recovery packages announced by the US, EU, and UK are all aimed at achieving these twin goals, with higher inflation preferable to a failed recovery.

Typically, inflation and government bond yields are not far apart, so in the medium term, we expect the benchmark UK 10 year government bond yield to rise above 2% from its current 0.91% and for fixed interest prices to fall further. The value of the bond and the interest paid will also be whittled away by inflation. This is not a friendly environment for fixed interest securities.

However, the majority of companies will benefit from modest inflation. Most will be able to pass on inflationary price rises to customers while others, for example, banks will be able to increase the interest charged on loans slightly faster than deposit rates to restore profitability to previous levels. Provided managements maintain tight control over costs the outlook for corporate profitability is very positive.

In the short term, there are always challenges and concerns.  The trade spats under President Trump, clashes over human rights, the breach of the Hong Kong Treaty, and the targeting of individual and corporate critics are all reminders of the changing nature of a US-China relationship that had long underpinned global growth.  And while we see over-valuation and signs of speculative behaviour in parts of the US stock market in particular, these tend to be areas where we tend to have relatively low exposure.

We remain positive on the outlook for equity and multi-asset portfolio returns this year.

The US 10 year yield went above 1.7% in March for the first time since the pandemic hit a year prior. This increasing yield results in losses for holders of US government bonds but it also has wider implications for all markets as this benchmark yield plays a key role in the valuation of future cash flows in equities. This impact is largest as well for those with a significant proportion of their expected profits in the future such as technology companies.

The fortunes of the UK and its stock market have been on an improving trend as the success of its vaccine strategy becomes more apparent both in the UK and to global investors. The closing days of March saw the first step towards reopening the economy and it seems likely that the June reopening target will be achieved.  This has added to investor confidence and seen further gains in those shares most hit by the closures, primarily the retail, travel, hospitality, and leisure sectors.  The one that remains the greatest unknown is travel, where restrictions in place in other countries must also be taken into account.

Looking back at cyclical recoveries in the past, they tended to last for twelve to eighteen months or so, with the greatest returns in the first twelve months.  Assuming a similar pattern on this occasion the June reopening may well coincide with the start of the next phase of the market’s movement – slower but still steady upward progress as increasing demand is met by companies that have cut costs to the bone through the downturn, letting them report sharply higher profits.

As in the UK, the European stock market is home to many large multinationals that are not particularly impacted by the local economy.  It was always going to take a while to vaccinate entire populations and it makes little difference to global companies in what order that happens.  While the return of tighter lockdown restrictions in France and Germany is a negative for domestic companies, these international companies can point to the rapidly improving outlook for the UK and US. And only slightly later, for Europe.

The stock market gained during the month, as did technology stocks, which recovered after a sell-off in the previous period. Rising bond yields were again a key issue, with the benchmark US Treasury hitting a new recent high of 1.7%. Bond investors appear to have been concerned about higher inflation as a result of the government’s huge stimulus plans. These massive programmes included an existing fiscal recovery plan to fight COVID and a longer-term “Green Infrastructure Bill”, totalling up to $2 trillion in new government spending.

At a time when the economy was opening up from COVID lockdowns and dislocations anyway and with up to 6% GDP growth forecast, the added kicker of fiscal largesse from the government has again unnerved bond investors. This trend may have further to run, especially as yields in real terms remain low when compared to history. Equities were able to make progress, however, as investors bought into a recovery/reflationary narrative and technology shares rebounded. This trade-off between higher yields and stronger corporate earnings will a major factor in determining market performance this year.

Emerging markets gave up ground in March, with China delivering a negative return of -2.1% as the government moved to bring lending and what many view as an overheating economy under control. This will be a very strong year of growth for China, driven not only by domestic demand but also by exceptional demand from international companies as they rebuild inventory to meet what is widely expected to be significant pent-up demand.  China is also likely to be a beneficiary of America’s recently announced $2 Trillion infrastructure program, both directly as a manufacturer of components and indirectly as the money spent finds its way into the hands of the US consumer.

One of the key questions for the property market will become clearer over the next few months as the economy begins to open up. We will start to see the longer-term changes to working practices as a result of working from home that has been experienced by nearly all office workers. This will have profound implications for use of space within cities especially, creating opportunities and disruption.

Gold was a weak performer within the alternatives sector in March which followed an already weak start to the year. The precious metal has suffered as a result of increasing yields but also decreasing uncertainty as the vaccine rollout continues strongly.