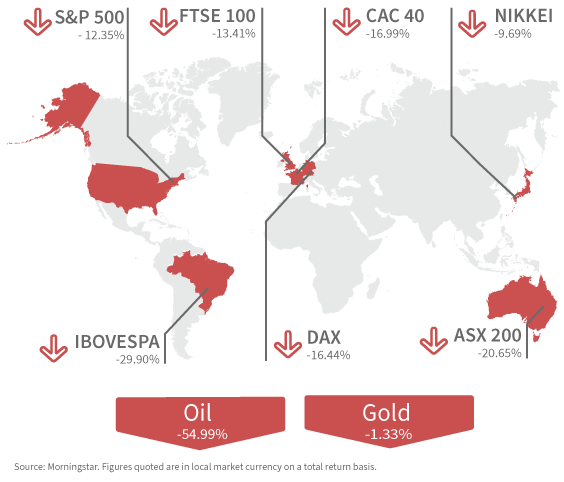 March saw equity markets close well off their lows, hit earlier in the month as investors adjusted to an economic landscape transformed by the spread of COVID-19 and lockdowns to all corners of the globe. The end of March also marked the close of the first quarter with the US S&P 500 Index closing down 12.35% and the UK top 100 companies 13.41% lower over the period.

Predictably, investor focus remains firmly on the impact of global lock downs on economic activity and how industries and companies are faring. The key questions for all are how long it will last, which companies will end up in a stronger position, how governments will finance spending and how this event might change behaviour. While it is impossible to provide an accurate answer to any of these questions it is possible to take a medium-term view that at some point, very soon, we will transition from being led by urgent medical need back to economic need and see that reflected positively in share prices.

We enter the second quarter expecting further turmoil as uncertainty continues, with stock markets potentially testing recent lows – a behaviour we frequently see when markets are under stress. Medical resources and capacity are building rapidly and as they do governments will increasingly focus on the need to avoid permanent damage to their economies, finances and citizen’s confidence in them. Notwithstanding our expectation of turmoil in the short-term, we expect equity markets to end the second quarter in a better position than at the start.

COVID-19 has led to significant volatility in both government bonds and corporate bonds. The initial reaction of government bonds was to increase in value strongly as investors flocked to safe haven assets before a pullback followed which was then met by central banks tried, all of whom have announced significant bond buying programs to avoid significant decreases. The last couple of weeks of March have seen a period of relative calm and the US 10 year interest rate is around 0.75% currently.

Corporate bonds have sold off significantly since the crisis began as investors become more concerned that companies won’t be able to pay back their debt, particularly in riskier section of corporate bonds, the high yield market.

Panic continued to hit global markets throughout March and the UK was no exception with the UK top 100, 250 mid-cap and all UK shares indices all registering extraordinary falls of -13.41%, -21.73% and -15.07% respectively. Since the January high technically all three are now in a bear market. With the exception of Healthcare, which was positive for the month, all sectors were down particularly Financials and Industrials as the biggest losers. It was a volatile month for sterling which finished -3.14% against the US dollar, it had hit a near 35 year low of 1.146 during the period.

The UK Manufacturing PMI fell to 47.8 from February’s 51.7, a reading of below 50 indicating a contraction in the underlying economy. Understandably, output, new orders and both domestic and overseas demand was considerably lower due to COVID-19. The rate of those employed fell at its fastest rate in nearly eleven years as employer’s restructured workforces through redundancies, natural wastage and limited rehiring to only essential staff. Raw material delivery times were at their longest on record as a result of shortages and disruption amidst the global pandemic.

In his inaugural month as Governor of the Bank of England, Andrew Bailey has already had to take action to help mitigate the huge economic impact that the UK is facing. The BOE has twice reduced the main lending rate, firstly by 0.25% to 0.50% followed shortly after by a further reduction to a historical low of 0.1%. The Bank has also reignited its QE programme and has made available an extra £200bn to inject into the system; globally central banks are taking similar action to help avoid a deep recession. In synchronisation, Rishi Sunak delivered an emergency package of measures of up to £330bn, a figure far above that used during 2008s financial crisis, to help protect businesses and workers whilst the pandemic brings day to day activity to a halt.

European markets once again suffered steep declines; Germany’s DAX -14.02%, France’s CAC -14.59%, Spain’s IBEX -19.74% and unsurprisingly Italy was the laggard falling 20.09%. The broader MSCI Europe ex-UK Index fell 11.22% in the month. There was some solace for sterling investors though as the pound fell -3.2% against the euro which lessened the impact of the declines.

The Eurozone Manufacturing PMI fell to 44.5 from 49.2 in the steepest rate of contraction for the Bloc since July 2012. As with other regions, output and new orders suffered sharp falls as COVID-19 spread rapidly across the continent. Job losses rose within the sector and constraints on the supply side also hit manufacturers. Italy, which became the epicentre of the European outbreak, saw the sharpest deterioration in activity; the Netherlands was the only country to register any increase in output albeit marginally.

Inflation fell for the second consecutive month, standing at 0.7% for the Bloc. A capitulation in the price of oil drove energy prices down and was the biggest contributor to the drop.

It was a period of superlatives, as most global equity indices registered record monthly and quarterly declines. The US was not immune, with the S&P down 12.4% and the Dow – 13.6% in local terms. The NASDAQ outperformed, falling by “only“ 7.6% as many technology companies performed well operationally in the down turn. Markets rallied sharply towards the end of the period on the back of a huge fiscal stimulus announced by the government, but it was not enough to offset earlier weakness. The oil price fell by 50% reflecting both demand and supply side factors which put huge pressure on the big oil companies and their suppliers as well as banks supplying capital into this important US industry. Safe havens such as gold and Treasuries were bought. The pound weakened against the US dollar.

The outlook remains uncertain, and forecasts for GDP and corporate profits have been sharply downgraded. Markets are likely to remain volatile until there is evidence that the outbreak of COVID-19 has been contained and that the economy can begin to return to normal.

Japan’s initial response to COVID-19 was muted. While schools were closed early on, for most of the population life continued as normal for much of the month despite demographics that leave it particularly vulnerable. Now it is playing catch-up as government moves to protect citizens – and itself. The economic slowdown seen elsewhere was reflected in a fall in consumer confidence and in the key Manufacturing PMI, down to 44.2 from 47.8 and in the Services PMI of just 33.8, down from 46.8. Japanese equities lost 10.5% during the month to close 30% lower on the quarter.

March has proved one of the most volatile months in living memory for global equity markets, with Emerging Markets (EM) no exception, falling -16.5% at the time of writing. The fall, however, is in line with developed markets such as the UK top 100 companies (-14.8%) and Dow Jones (-16.4%). What remains to be seen is how quickly the EM economies will bounce back relative to their developed peers, who have a deeper arsenal of economic tools at their disposal.

A number of EM central banks are deploying quantitative easing measures – buying bonds in amounts not seen for over a decade, with Brazil’s the largest to date at R$1.5tn.

In what would otherwise usually be headline economic news, oil prices fell 59% to $25 after the three-year OPEC supply deal fell apart and Saudi Arabia pledged to raise output to record highs. This makes our fund selection process all the more important, with net importers of oil to benefit relative to net exporters.

With global asset prices following news headlines rather than fundamentals, markets await a slowing of the pandemic before finding some traction in appropriate asset-pricing.

COVID-19 has come at a difficult time for a commercial property already embattled by the structural difficulties facing the retail sector. Even before the current crisis, value was being written off retail property in the double digits. Now with the closure of shops and restaurants, their resiliency is being tested further. The sector is so out of favour that there is value but it is important to be selective in what is clearly a challenged time.

The alternative sector is one that can be compelling in times of economic difficulty as we look for investments that can perform well in spite of economic conditions. One such area we have been focused on has been infrastructure funds that generate their return from ‘availability’ revenue. This means that they get paid when the asset available for use rather than by how much it is being used and so are less affected by the current decreased usage of some public services. Further to this, the revenue is typically paid by governments and we think this combination is attractive in the current challenged environment.