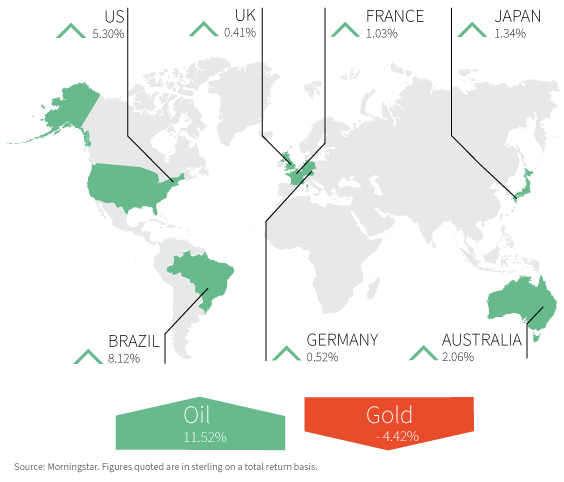 In June, bond yields continued to move downwards and markets were led by the US as investors rotated into assets that have acted as safe havens for much of the last several years, namely US Technology and Growth.

In the real economy, the global manufacturing recovery continued to accelerate further and unleashed readings on inflation that have not been seen for years or even decades in some instances. For example, in the US Core CPI rose at its highest rate since 1982 whilst in China Producer Prices advanced at a 9% clip, which is close to a record high.

Price increases were driven by some extent because of the easy comparisons from last year’s lockdowns but were compounded by continued shortages of semiconductors that have been affecting many industries, particularly automobiles, and look set to continue through to the end of the year. In addition to this, we have seen the oil price tearing higher and staff shortages in both the UK and US, as well as wage pressures building.

This had led to the Federal Reserve finally acknowledging the presence of inflation and beginning to talk about talking about tapering asset purchases. All prior communications had concentrated on their intention to let inflation run above their 2% target before withdrawing stimulus. Whilst they did maintain the view that current elevated levels of inflation are transitory, market movements throughout June were dominated by the reaction to their hawkish surprise.

Fixed Interest markets were generally strong at the long end as investors looked through strong inflation numbers in each of the US, UK, and Europe. The reason for the look-through is that the rate of economic recovery appears to be peaking (at a high level) and commodity prices such as lumber and industrial metals, e.g. copper, (but not oil) have rolled over noticeably. Bond investors have also been buoyed by the fact that the Federal Reserve (Fed) is finally talking about tapering Quantitative Easing and raising interest rates at some time in the future. Hitherto the Fed’s communications had concentrated on telling investors they were intent on letting the economy “run hot” before even thinking about cooling it down. This slight change in tone meant the yield curve flattened as long rates fell whilst short rates were flat or even increased. We view this as an overdue contra trend rally following a big sell off. Prevailing real interest rates (nominal rates minus inflation) are still incredibly low for even moderate GDP growth and inflation – well below the levels which prevailed post the 2008 Financial Crisis. As such we are of the view there is considerable scope for real yields to rise from here, taking nominal yields with them.

With stock markets globally so dependent on the ebb and flow of news around Covid, it should come as no surprise that June was not such a good month for UK shares.  The rapid spread of the Delta variant, increasing restrictions on international travel and confirmation that the long-promised, unrestricted re-opening of the economy on 21 June was to be deferred to 19 July, contrasted sharply with the more positive news flow seen in the US and Europe.  As a result mid-cap shares, which tend to reflect the domestic economy, gave up ground and returned -1.2%.  Larger companies fared modestly better, returning 0.4% to leave returns from UK shares at just 0.2%.  Overall returns were held back by financial stocks which gave up ground as hopes of higher yields on fixed interest receded. While largely offset by gains on oils and pharmaceuticals, both large sectors of the market, the UK’s lack of any meaningful technology exposure once again acted as a drag on returns.

The month of June saw continued strength in European equities with positive absolute returns being generated for investors once more. However, much like we have become accustomed to over the last decade, the market lagged considerably behind the United States.

This relative underperformance was driven primarily by the fact that the European market has a much lower percentage of its companies operating within technology and other growth sectors, which came strongly back into favour during the month. A hawkish pivot by the Federal Reserve facilitated this with a flattening in the yield curve favouring companies whose cash flows are projected further out into the future.

However, the economic backdrop remains strong as vaccine progress continues and there is optimism that Europe can continue playing catch up to an already booming US. This environment should generally be supportive for equities and we would expect a gradual rotation out of US assets and into Europe throughout the second half of the year.

US Equities had another strong month in June with Technology and Growth shares leading the way. This was made possible by the fact that investors are viewing both the current way above trend growth in inflation and GDP to be in the process of peaking. Such a view was given further credence by the Federal Reserve admitting for the first time since the pandemic struck that sometime in the future they will consider tapering Quantitative Easing and even raising interest rates. So, bond yields fell and cyclical stocks took a breather as lower rates benefit companies whose worth comes from the profits they can generate far into the future.

Whilst we agree growth is indeed in the process of peaking we think both GDP and inflation will remain relatively firm over the medium term as the Federal Reserve have made it clear they will be very gradual in what they do so they can fulfil their mandate of ensuring full employment is reached. The government is also doing their bit with another significant fiscal package being agreed in principle between the Democrats and Republicans. The combination of Fed and government action should ensure the economy keeps purring along at acceptable rates for a good while yet. In general, this should be beneficial for equity markets.

Asian shares saw a wide dispersion of returns on the month to 29th June with South Korea, Taiwan, and India leading the way along with the Antipodean countries whilst China, Hong Kong, Malaysia, and Singapore gave up some ground.

The highlight of the period was the Chinese Central Bank injecting liquidity into the financial system for the first time since April after a period in which the authorities had been acting to reign in excess credit growth and financial market speculation.

India benefited from the dramatic fall in new Covid cases from the May peak. Indonesia, Thailand, and Vietnam all experienced significant spikes in Covid cases but stock market losses were minimal.

Of more importance was the 2.9% rise in the dollar index. This is usually associated with Asia underperforming and it did have such a marginal impact again this time round. As Asian economies, external finances are in much better shape now than during the 2013 taper tantrum investors are hopeful that the negative impact of tapering Quantitative Easing by the Federal Reserve will not be as great this time round. Asian economies will be further bolstered as trade and tourism recover from the pandemic.

Property REITs continued to rally during the month as investors sought out quality assets on low valuations. As if to reinforce that, the potential value in the property portfolio is a key consideration for the groups now bidding to acquire supermarket operator Morrisons.

Gold suffered its worst month since November 2016 in June, as the hawkish pivot by the Federal Reserve alleviated inflation fears in the market which had been very supportive for the precious metal. Sterling investors saw a decline of – 4.42%, while many industrial metals like Copper also fell sharply as China began efforts to rein in surging commodity prices. The exception to this was Oil, which drove yet higher still as post-pandemic recoveries continued at pace. Furthermore, OPEC+ discussions continued with a deal on supply expected at some point, this helped edge the oil price above $75 per barrel.

The opinions expressed in this communication may differ or be to the contrary of those expressed by other individuals within the WHIreland Group and they are subject to change without notice. We have issued this communication for information purposes only and it does not constitute financial, professional or investment advice or a personal recommendation, nor does it constitute a solicitation or an offer to buy or sell any securities or related financial instruments in any jurisdiction. No representation or warranty, either expressed or implied, is provided in relation to the accuracy, completeness or reliability of the information contained in this communication, nor is it intended to be a complete statement or summary of the securities, markets or developments which may be referred to. Past performance is not indicative of future performance and overseas investments are subject to fluctuations in exchange rates. The value of investments and the income from them may go down as well as up and investors may not get back what they originally invested.