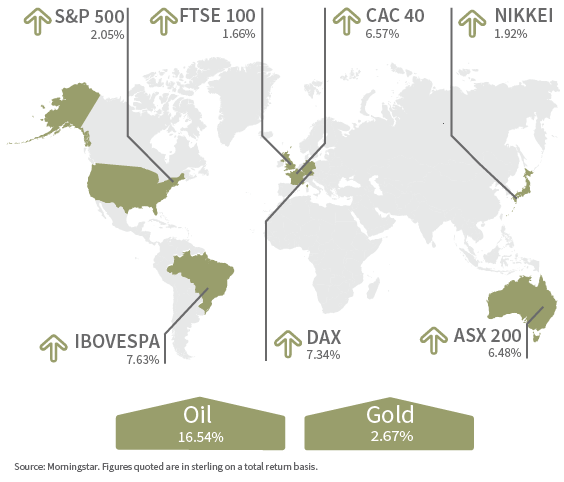 The month saw global equity markets recover further ground with the UK world index returning 2.95% in sterling and bringing the total over one year up to a respectable 5.82%.

As we move into the third quarter of the year we will start to hear more about how the return to normal is working out for the companies that make up the stock market. We are also likely to get a better feel for the underlying problems lockdown has left us, for example, how many jobs have been lost and how rapidly people return to their old way of life.

After such a remarkable and challenging six months it is worth recognising how much progress has been made from the dark days of late March when panic selling saw equity markets hit their lows as Covid-19 infection rates soared. The UK, Europe and US have re-opened the majority of their economies for business once again. While there has been no single ‘knock-out’ medical break-through such as a vaccine our ability to treat the virus has improved, both in terms of physical capacity (critical care beds and ventilators) and of treatment (for example the use of existing drugs that improve survival rates). While it is easy for the Press to find examples where the social distancing message is being ignored, a far greater number of people are now actively trying to prevent its spread. Together with the introduction of Test and Trace, these measures will go a long way towards allowing people to return to their normal way of life and for the authorities to deal with outbreaks without the need for national lockdowns.

While the initial spread of the virus caused a panic sell-off, the impact of any subsequent wave of infections on equity markets is likely to be modest.

All this has come at a cost and left governments promising high expenditure that will eventually need to be paid for by higher taxes and higher government borrowing. The rapid return of the financial support measures we saw during the global financial crisis of 2008 have prevented adding a credit crisis to a medical one but has driven government bonds yields close to zero in the US and UK, leaving very little scope for further gains in prices. But with the prospect of more government borrowing we view this as marking the end of a near forty-year decline in government bond yields that now virtually guarantees losses to holders even if we see only modest inflation in future. While there may be opportunities in corporate bonds as companies recover and perhaps in government index-linked bonds, our attention is increasingly drawn to Alternative assets both for similar returns but also to fulfil the traditional role of fixed interest bonds – counter-balancing the volatility of the shares in portfolios.

We remain optimistic on returns for long-term investors and, in time, for the resumption of dividends.

It was another positive month for UK equity markets with the UK top 100 companies, UK top 250 shares and UK All Share indices returning 1.66%, 0.60% and 1.54% respectively. Financials and Materials were the notable contributing sectors for the main market, with Healthcare stocks the biggest laggard.

The UK Manufacturing PMI indicated a move into expansion for the sector, with a rise to 50.1 from 40.7. For the first time in four months production was up whilst new orders and job losses eased at a slower rate. Output charges rose as supply chain input costs rose the most in nearly a year. With restrictions easing further, business sentiment hit a 21 month high across the companies surveyed.

UK house prices registered their first annual fall since 2012, dipping 0.1% in the twelve months to June. The average house is now worth £216,403. Despite the lower prices, many first-time buyers may find it hard to purchase a house, as many lenders have raised the minimum deposit required to borrow funds.

June was another stellar month for Sterling investors in Europe, with returns buoyed by a 1.63% fall in the value of GBP against the Euro. The MSCI Europe ex-UK Index returned 4.98%.

The Eurozone Manufacturing PMI climbed to 47.4 from May’s 39.4, still below 50 that would indicate underlying expansion for the sector. A softer rate of decline in new orders and output was recorded as businesses began to gear up operations again. Unemployment rose for the fourteenth consecutive month, however business confidence returned to positive territory for the twelve-month outlook.

We remain neutral in our European equity exposure with a bias towards larger companies with diverse and multinational revenue streams.

It was a quieter month after the previous strong rallies, though all three major indices were ahead. The technology heavy NASDAQ again led the way, returning 6.43% while the broader S&P 500 Index returned 2.05%. Economic indicators generally remained weak, though employment data came in better than expected which was a spur to recovery hopes. This positive was balanced by an increase in Covid-19 infection rates in some states, with lockdown and other disease management protocols being re-imposed.

Japan’s Nikkei 225 Index returned 1.92% in sterling over the month and 10.08% over the year.  Manufacturing continued to contract, with the manufacturing PMI of 40.1 still well below the neutral level of 50.  Heavily dependent on incomes from manufacturing – particularly bonuses – the service sector also contracted, reporting a PMI of 42.3. While this is largely a function of the global economic weakness caused by Covid-19, market sentiment was also depressed by political events and, for foreigners, increasing disappointment over the failure of Prime minister Abe’s ‘Abenomics’ to make any real change to corporate governance since it was introduced following the global financial crisis.

The MSCI Emerging Markets Index is on track to post its biggest quarterly gain since the 2009 recovery from the global financial crisis, with capital flows now showing a modest return after record outflows in early 2020.

This turnaround stands in stark contrast to the picture on the ground in Latin America, South Asia and Africa where the virus outbreaks continue to weigh. The latest IMF projections see GDP for Mexico, Argentina, Brazil and South Africa contracting at least 8% for the year. On a more positive note, China is seen as potentially eking out positive economic growth for the year and the low-rate, high liquidity, environment offers some support.

We remain cautious and underweight the region – focusing investment away from struggling economies like Brazil in favour of those recovering strongly like China.

The outlook for property remains very uncertain given the restrictions on commercial activities across the world.  Rapidly changing working habits as a result of the lockdown creates further uncertainty in the office segment. We remain underweight as a result.

Gold makes up a significant part of our alternatives exposure and continues to play a key role in portfolios given the current levels of uncertainty around the impact of the coronavirus on economies and politics globally. The precious metal has been performing well and reached an 8 year high in US dollar terms in June.