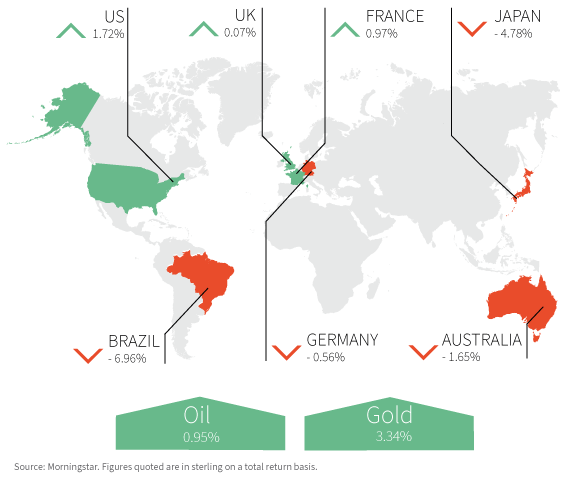 Despite experiencing the worst day of the year so far for many Indices, most major markets had limited the damage by the end of the month. Three of the four major US stock markets ended the month in positive territory, with the Russell 2000 being the outlier as fears about the emergence of the Delta variant in the US-led more domestically focussed names lower. The FTSE and the German Dax ended July roughly flat, but the French CAC index and the broader Stoxx index finished up on the month, reflecting European progress on travel and vaccinations. The most startling market action occurred in Asia, where a crackdown on technology and education companies by the Chinese authorities led many of the large index names sharply downwards. The Japanese Nikkei and the Shanghai index ended down over 5% and Hong Kong fell around 10%. Treasury Yields continued their decline as market volatility increased due to overhanging virus concerns. Highlighting the role of the Japanese Yen as a safe-haven asset, it was the only major currency to appreciate against Sterling in June.

Government Bond yields accelerated their decline from the highs made in the Spring as Covid, actions by the Chinese Authorities and uncertainty about future Federal Reserve actions (and impact thereof) conspired to dampen expectations about future growth and inflation.

During the month US real yields (nominal interest rates minus inflation) dropped to the lowest level in recent history. Such levels imply a huge amount of pessimism from investors and are contrary to the goals of Central Banks who have repeatedly said they want to ensure a robust recovery is in place before they gradually reduce stimulus.

The European Central Bank even changed decades-old policy and promised that they would not repeat the mistakes of the past when they reduced stimulus too early and contributed to the crises in the European periphery.

Therefore, we think yields are likely to rise between now and year-end as the economic recovery proves to be resilient and more money flows into the real economy and away from bank balance sheets.

UK equities returned 0.53% in July, with the top 100 companies returning just 0.07% but the next 250 largest a far stronger 2.7%. To a great extent, this reflects the makeup of the indices used to measure markets, with the second liners more exposed to the domestic economy and less sensitive to global market sentiment than the leaders. Compared with many others the UK economy is growing rapidly, driven by the success of the vaccination program and the reopening of all but a few small corners of the economy, largely travel and leisure related. This was reflected in the corporate reporting season, which started in earnest in the third week of the month with a raft of companies reporting stronger than forecast half-year results. Second liners also continued to attract the attention of corporate raiders, with a number of bids during the month. This was in contrast to the performance of the larger companies, held back by concerns over events on the global stage and continued drag from financials.

July was yet another positive month for European equities, with a continued uptrend in the region’s ‘growth’ companies leading the market higher.

The outlook for Europe remains positive, with improving domestic economics, reasonable starting valuations and an optimism that decade old headwinds are starting to clear.

Furthermore, the European Central Bank (ECB) altered its monetary policy stance to allow for further flexibility in its interest rate and asset purchase decisions in July. The objective of this is to avoid repeating mistakes of the past; namely, removing supportive monetary conditions too early to the detriment of the economic recovery. We believe that this represents a significant development and allows us to have greater conviction when allocating to the region’s equities.

US Equities were mixed in the month as fears over the spread of the Delta variant began to filter through to markets. The more domestically focussed Russel 2000 epitomised this mood as it fell by more than 3% compared to the Nasdaq and S&P, which ended the month both up over 2%, led again by the large index names.

Within the month, the Fed reverted back to a more dovish tone, despite admitting “progress” had been made with regards to their economic targets. No date was set for a tapering of asset purchases.

Our concerns about the US centre around elevated valuations and a peaking rate of economic growth, typically the subsequent twelve months after PMI readings peak at levels over 60 have led to weaker market performance. However, we believe that the nominal rate of growth will remain strong and with a supporting infrastructure bill to potentially come next, we may see a broadening of the market and an opportunity for active management below the index level.

Asian equities were mostly lower on the month with particularly noticeable falls in Hong Kong and amongst Chinese Technology and Education stocks.

The region’s shares were hit firstly by more lockdowns caused by a rapid increase in Covid Delta variant cases and secondly due to a clampdown by the Chinese authorities on the previously high-flying sectors comprising the eCommerce behemoths and private pay education companies. The latter fell almost 50% in one day as the government effectively banned them from making a profit. This serves as a reminder of how dangerous it is to fall foul of the Chinese regulators.

On a brighter note, China made its first small step to easing policy and more support is expected in the coming months. It is also of some comfort that China hopes to be exporting 340 million vaccines per month by the end of September.

Returns on gold were broadly flat in July, following a series of sharp moves both upwards and downwards throughout the month. Falling real yields acted as a tailwind for the precious metal, but continued strength in the US dollar limited the upside.

The price of oil declined in the month as a deal was struck with OPEC+ members on increasing supply and after Delta variant fears troubled markets in the middle of the month. However, the price recovered somewhat and ended the month comfortably above $70 per barrel of Brent Crude.

The opinions expressed in this communication may differ or be to the contrary of those expressed by other individuals within the WHIreland Group and they are subject to change without notice. We have issued this communication for information purposes only and it does not constitute financial, professional or investment advice or a personal recommendation, nor does it constitute a solicitation or an offer to buy or sell any securities or related financial instruments in any jurisdiction. No representation or warranty, either expressed or implied, is provided in relation to the accuracy, completeness or reliability of the information contained in this communication, nor is it intended to be a complete statement or summary of the securities, markets or developments which may be referred to. Past performance is not indicative of future performance and overseas investments are subject to fluctuations in exchange rates. The value of investments and the income from them may go down as well as up and investors may not get back what they originally invested.