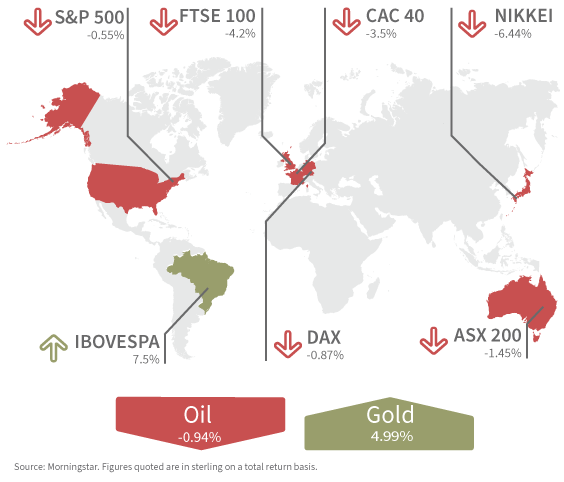 July saw a marked divergence in global equity market performance, with strong gains in the US and Emerging Markets offset by weakness in the UK and Europe. These gains were in part reduced by the weakness of the US dollar against the Euro and Pound. Perhaps more important the scale of dollar weakness almost certainly marks a change in trend, most likely signalling that international investors consider US equities to be pricing in economic recovery and that the premium paid for the perceived safety of US assets is no longer justified.

What is also clear is that the sharp V-shaped recovery forecast by so many is morphing into a variety of letters as the need for caution as we emerge from lockdown pushes out any return to previous business levels. This is reflected in the positive returns from fixed interest this month, the expected beneficiary of further stimulus packages and lack of inflationary pressures.

Finally, the star of the show this month was gold, which rose 11.5% in US dollars and 5.0% in Sterling as investors bet that it would continue to rise, driven by investors insuring against inflation and by momentum traders. As adopt a wait and see strategy there is potential for the price to rally further though the near 30% appreciation in both US dollars and Sterling reflects a sizable depreciation in both currencies already.

Recognition that emerging from lockdown would take time and expectation that further stimulus would be needed left UK Gilt yields lower at all maturities and strong returns from corporate bonds as credit spreads came in further.

The threat of a second wave of infections and lack of progress in Brexit negotiations left UK equity market returns in negative territory at -3.58%. Financial and energy stocks were the biggest detractors over the period, accounting for over half of the fall. The outperformance of the more domestically focussed mid cap stocks was due to sterling’s 5.52% appreciation against the US dollar, which has a negative impact on companies with large international operations.

The UK Manufacturing Purchasing Managers Index or PMI, a survey of activity that indicates expansion when above 50, rose to 53.3 from 50.1 previously. Growth in output and new orders were at multi-year highs, with notable increases in inflows from the US, Asia and parts of Europe. Employment levels dropped for the sixth consecutive month, albeit at a slower pace. With global lockdowns easing, business sentiment for the next twelve months hit a 28 month high.

Nationwide reported a 1.7% rise in UK house prices in July citing the rebound has been fuelled by pent up demand from those who wanted to move house before the lockdown. The average price now stands at £220,936 – slightly under April’s £222,915.

The Eurozone Manufacturing PMI rebounded to 51.8 from June’s 47.4 signalling the bloc’s first month of expansion since February 2019. Production, new orders and exports returned to growth as restrictions continued to ease around the globe. Unemployment rose for the fifteenth consecutive month. In an attempt to boost sales, output prices were cut again, reflecting falling input costs. Business confidence for the coming twelve months continued to improve.

The Eurozone suffered the biggest GDP contraction on record in second quarter falling 12.1%, with each of the major economies registering double digit declines.

July was a strong month after a quiet period, with all three major indices ahead. The technology heavy indices again led the way, with broader indices following. Economic indicators were mixed, with a turnaround in jobless claims offset by some stronger PMI survey data. An increase in COVID infection rates in many states and the re-imposition of lockdown and other disease management protocols were key factors in this weaker employment picture. The US government has proposed another substantial stimulus package to underpin economic growth and offset the negative effects of the COVID pandemic.

Japan continues to confound expectations of recovery in global demand, with a Manufacturing PMI of 45.2 remaining stubbornly below 50 in stark contrast to its international competitors. Equity returns were negative, driven by domestic concerns and by a weaker US dollar that makes Japan’s manufacturers less competitive against US ones.

With global equity markets continuing their recovery from mid-March lows, Emerging Markets continued to participate – rising strongly in July. Concerns are still rife in the area however, with the pandemic still ravaging regions and central banks running low on firepower to counter the economic slowdowns.

A continuation of monetary loosening is expected in August, with Brazil on track to lower rates to a historic low of 2% and India potentially following suit – though their high inflation rate argues against that.

China continues to provide a road map for recovery, reporting a Manufacturing PMI of 52.8 and Services PMI of 58.4.  However, the Yuan’s recovery has stalled as tension between Beijing and Washington continues to mount.

On valuation grounds, Emerging Markets represent good value compared to global equities. However, the variables involved with the current pandemic make it impossible to ignore the top-down impacts a second wave would have.

We continue to favour funds with a quality focus, operating in more stable areas of the developing world. With August historically one of the most volatile months of the year for the asset class, we continue to be cautious with our allocation.

The standout performer this month was again gold, which gained 5.0% in sterling but 11.5% in US dollars. The rise reflects concern that the government stimulus packages are debasing currencies and that gold will act as a store of value against inflation.  Having added to positions several months ago we have started to reduce our exposure to realise the gains and reinvest in less volatile alternatives.