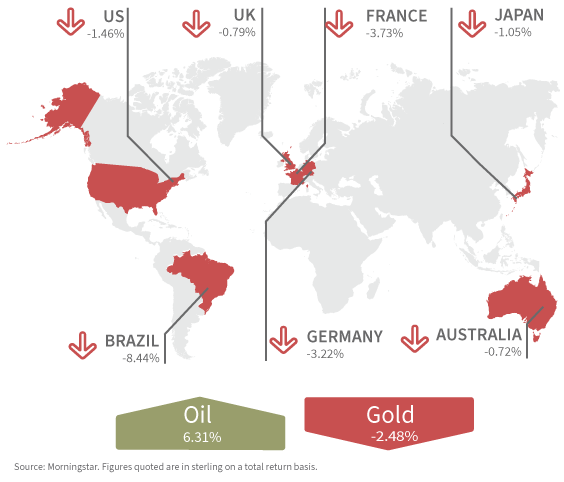 The resurgence of Covid across much of Europe, the US, and South America, and in particular the appearance of new variants has given investors cause to hesitate and re-assess how they see events playing out over the next 18 months or so.

As a result, January saw global equities return a loss of 1.3% in sterling with the UK returning -0.8%, Europe -2.2%, the broader US market -1.5%, and US technology stocks -0.1%. Although shares were weaker commodity prices rose, returning 2.2%, and fixed interest declined, with longer-dated UK Gilts returning a loss of 3.2% – both signalling that the underlying expectation that we will see strong economic growth in 2021 remains undimmed.

Across much of Europe, the US, and the UK we have seen a modest pullback in consumer cyclical stocks, particularly the ‘usual suspects’ of travel, leisure, hospitality and one or two modest downgrades to global growth estimates. However, our basic premise is little changed, with scope for a strong recovery in earnings over the next 18 months across much of the global equity market.  It may be delayed but we don’t expect it to be derailed.

Our key concerns remain the risk and role of fixed interest in portfolios and signs of a rising bubble in some areas of the stock market.

The concern around fixed interest remains that the near 40-year tailwind of ever-lower interest rates that has propelled returns from both conventional and index-linked bonds is at an end. With redemption yields below expected inflation, future returns will remain negative in real terms – as indeed they did for much of the twentieth century. With so many of their assets priced off bond yields, the concern extends into the Alternative Income sector, where strong fund inflows have left a lot of money looking for a home, driving returns down and forcing investors up the risk scale. There is also a potential for a repeat of the sort of move in yields we saw in the taper tantrum of 2003.

The concern around bubbles is signposted by the rise in speculative ‘investments’ including Bitcoin and in the stock market by Tesla. We have also seen a very strong rise in the number of IPOs of Special Purpose Acquisition Companies (SPACs), shell companies listed to raise cash for the purpose of eventually acquiring other businesses. While money is so cheap and the status quo is maintained these need not be an immediate threat, but it does point us towards areas of the market where we can see corporate cash flows and where valuation is actually related to it. EM/Asia (ex-China) and the UK stock markets offer this.

January was a month where inflation intensified. This is in part due to the planned stimulus package from the new US President, Joe Biden, which some investors believe could overheat the economy and result in inflation. The impact of this has been a decrease in the prices of government bonds, as higher inflation makes the very low yields available more unattractive.

The stock market outperformed global equities modestly over the month with a return of -0.8% in response to the modest deterioration in the global outlook. However, by the month-end, the outlook for the UK economic recovery was improving rapidly as it became evident that our vaccination program was meeting the most optimistic targets. This bodes well for an early end to lockdowns and a recovery in the economy.

The stock market returned -2.2% as investors factored in delays in the vaccination program and the political debate around the speed and effectiveness of the administration in dealing with key issues. While full economic recovery may have been delayed by a few months we remain confident it is on the way and see weakness as an opportunity.

The new year got off to a weak start, with the broader market returning -1.5% but technology a positive 0.3% in sterling. Covid rates remained high and economic growth remained at sub-par levels. On the inauguration of President Biden, we saw a rapid change of direction back to conventional politics and further deliberation about the scale and structure of the government’s long-awaited fiscal stimulus package, which caused some uncertainty.

The outlook for the property market continues to be challenged and has been one of the areas affected by the pandemic that hasn’t rallied strongly since the vaccine news. This is in part due to an increase in announcements and activity related to the use of office space which looks like it will be on a downward trend following the extended spell of home working we have all had.

The most notable move in alternatives came from the price of gold which fell in January and has been on a downward trend since summer last year as investors shy away from the precious metal.