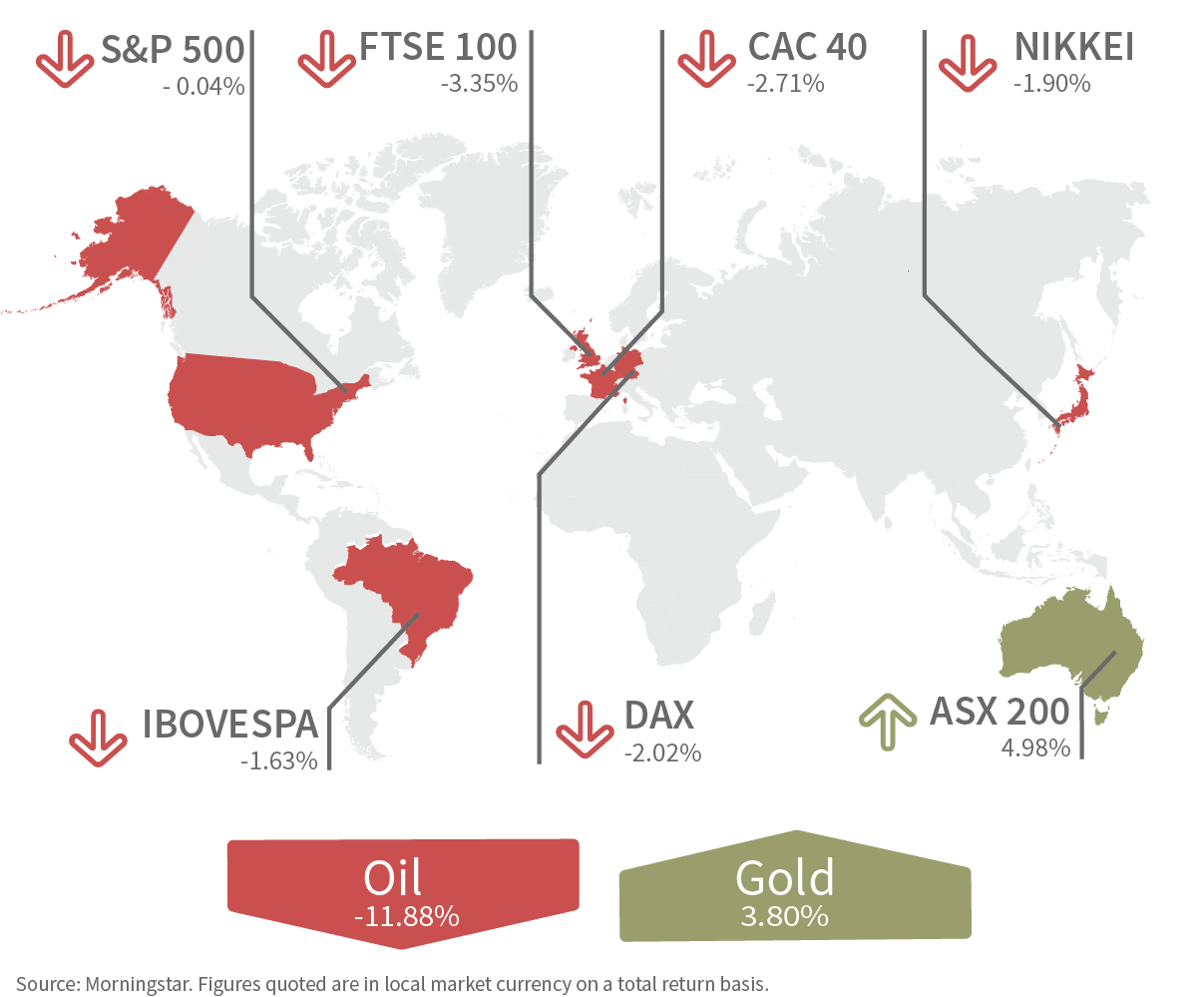 After a promising start that saw equity markets continue higher into January, gains were pared back on concerns that the Coronavirus would slow economic growth and reduce corporate profits. While the eventual impact of the virus will remain an unknown for some time, markets have largely worked on the basis that it progresses in a similar way to the 2003 outbreak of SARS, eventually petering out.  Its impact on markets has largely depended on their proximity and economic exposure to China, with Asia (ex-Japan) returning -4.5%, commodities -7.4% and oil -11.8%.  Conversely, strong momentum in the US economy saw the US stock market end the month flat and global equities return -0.9% over the month in dollars.  Returns are modestly higher when adjusted to sterling, rising 0.5% and falling 0.4% respectively. As one would expect, bonds and other defensive assets saw modest gains.

Clearly there is a risk that investors are being too sanguine but in contrast to the SARS event, which met a global economy weakened by the shocks of the Dotcom bubble and 9/11, Corona has met an economy strengthened by a decade of growth and in particular by a strong US economy and strong corporate profits growth.  While we left our asset allocation unchanged for February January we are nonetheless more cautious and watching developments closely.

January was a positive month for fixed income market as prices rose as yields decreased globally. The US 10 year interest rate fell from around 1.9% to 1.5% and we saw moves of a similar size in UK and Euro denominated bonds. This increase in the value of government bonds came as the demand for safe assets increased due to geopolitical tensions in the Middle East as well as fears about the Coronavirus.

It was a negative start to the year as the UK top 100, 250 mid-cap and all UK shares indices fell 3.40%, 3.38% and 3.31% respectively.The spread of Coronavirus in China hit commodity exposed stocks and contributed to the decline in the main market. Despite the large fall in equity markets Sterling remained relatively flat against the US dollar dipping 0.38%.

Following eight months of contraction the UK Manufacturing PMI finally showed signs of expansion, albeit modest, with a reading of 50 – up from 47.5 in the previous month. New orders were slightly better though exports continued to decline; inventory purchases declined at their fastest rate for over six years. Employment in the sector remained unchanged, breaking a nine month run of job losses. Input cost inflation hit a five month high whilst output charges rose for the 45th consecutive month. Business optimism improved to an eight month high, buoyed by increased demand, expectations that export volumes will rebound and an improved political environment.

Nationwide reported that house prices rose 0.5% in January and 1.9% year on year – the fastest annual rate for over a year. Over the course of 2020 Nationwide see house price growth remaining flat.

The Coronavirus worries jolted markets globally in January and the Eurozone was no exception.  Across the region, markets were in negative territory, particularly Sterling investors as the MSCI Europe ex-UK declined -1.56%. The two biggest economies in the Eurozone fell the most with Germany’s DAX and France’s CAC returning -2.78% and -3.48% respectively. Spain’s IBEX was down -2.01% and Italy’s MIB shed -1.91%.

The economic data coming out of the Eurozone remains challenging with a 47.9 January Eurozone Manufacturing PMI figure, marginally above expectations of 47.8 and ahead of Decembers 46.3, however below the 50 needed for expansion. The reading marked the twelfth straight month of contraction for the sector.

Purchasing, new orders and output posted continued falls alongside a worrying ninth month of job losses.  With falling input prices flowing through to reduced prices for consumers, confidence across the bloc jumped to its highest level since August 2018.

Eurozone inflation is estimated to edge up slightly to 1.4% from 1.3% previously, which if expectations are met will be the highest rate since April. Inflation may come down over the next few months as the oil price retreats from its recent highs.

At present we have a neutral position within our portfolios, however valuations are looking attractive and this is constantly monitored.  At this time we have a bias towards larger companies with diverse and multinational revenue streams.

The equity market enjoyed a quieter period, after it had traded near all-time highs in previous months. The broad – based S&P was in negative territory, just (-0.04%) as was the more cyclical Dow Industrial (-0.89%). The immediate catalyst for weakness in the US, and other global equity markets, was the confirmation of the outbreak of the serious respiratory disease, Coronavirus, in China. Global sectors and geographic areas most exposed (travel, leisure and airlines; China, Asia and Japan) were the worst performers, and this had some knock on effect to the US. The oil price fell, as did the price of other industrial commodities, as the market priced in lower industrial activity; in contrast the gold price rose as investors sought out traditional safe havens.

The immediate impacts on Chinese consumer and investment spending from restrictions in travel are already being felt, and are having a substantially negative impact on its economy and those of its Asian trading and commercial partners. Secondary impacts could cause further damage for example many US corporations have manufacturing supply chains based in China, and these could be seriously affected by further travel restrictions and export controls. In the short term it is likely that the US market will retain a cautious bias until there is a clear evidence that this serious health crisis is under control.

Japan started the year on a weak note, falling 1.9% in January, as the outbreak of Coronavirus shook confidence in global markets.

Yasutoshi Nishiura noted: “concerns over the impact to the global economy from the spread of infection in China, transportation disruptions, cancellation of group tours from China and an extension in the Lunar New Year.  If the situation takes longer to subside, we’re concerned it could hurt Japanese exports, output and corporate profits via the impact on Chinese consumption and production.”

China represents the second-largest export destination for Japan and Chinese citizens contribute to over 30% of all visiting tourists (40% by way of spending), so it is understandable that the implications of a drawn out pandemic are causing investors’ concern.

Emerging markets pulled back at the start of 2020, with January seeing the longest losing streak since August 2019 as the rising death toll from Coronavirus fanned fears of an economic slowdown in the world’s second largest economy – China.

Malaysia and South Africa unexpectedly cut rates, in a move which some have seen as the early stages of monetary easing in those emerging market economies seeking to shore up faltering economic growth – following the trend of 58 developing countries in 2019.

The liquidity provided by the FED (and other central banks) in 2019 resulted in better than expected performance for Emerging Market bonds and equities. We expect this year to follow suit, albeit to a lesser degree, maintaining a slight underweight versus the PIMFA benchmark.

The UK property market had a pullback in January following the strong growth following the election. Specialist funds in areas such as student accommodation and logistics continue to be in favour.

Gold had a strong January and was a notable beneficiary of the tensions between the US and Iran following the assassination of the Iranian General Qasem Soleimani with an airstrike in Iraq.