Global Market Insights for May 2020 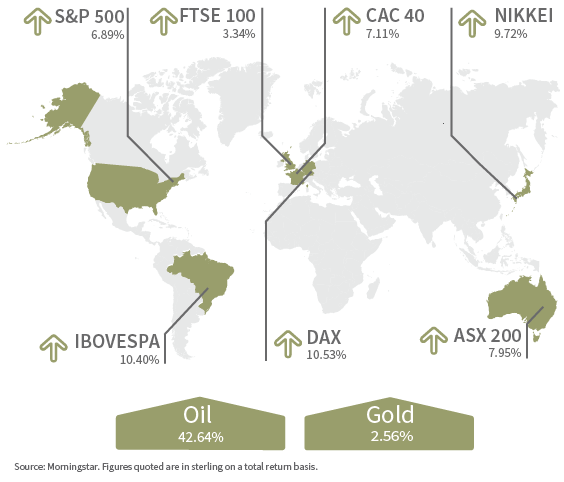 May saw global equity markets put in another strong performance with the UK top 100 companies index returning  3.34%, the US S&P 500 Index 6.89% and the MSCI Europe ex UK Index  7.9%.  Commodities also put in a strong performance, with Brent Crude Oil up 42.64%.  On the down side, we continued to see modest losses in UK Gilts as investors shunned yields at close to 40-year lows and the threat of further issuance.  The Bloomberg Barclays Gilt 15+ Index declined by 0.4%.

The month also saw strong recovery in both value stocks and the laggards, helping Germany’s manufacturing heavy DAX  Index return a massive 10.5%.  This reflected the ongoing mismatch between the high valuation of Growth stocks and more conservative valuation of Value stocks that we have highlighted before and also the move to price in a sharp V-shaped recovery.

Certainly, it is wrong not to be encouraged by the re-opening of businesses across the UK, Europe and all-important US and a key mistake to expect ‘Joe Six-Pack’ to do anything but return to his old ways and to start spending again.  On the other hand, as salary support schemes are removed and we can see the underlying scale of unemployment it is hard to do anything but guess what profits from a swathe of businesses will look like, or indeed how much Government will choose to claim in future taxes to pay back today’s debts.  A significant number of companies have removed guidance, leaving individual analysts to guesstimate what those numbers will look like.

The first is that we should not confuse uncertainty with risk. For a long-term investor the risk that returns from equities fall below those of cash or fixed interest for an extended period is very low, though uncertainty over immediate short-term returns remains high.

The second is that the near forty-year decline in government bond yields that has supported the long bull market in equities, property and other asset prices is at an end. If we are to have low inflation and low yields then we should expect lower investment returns.

The third is that many, including ourselves, came into 2020 with a view that US equities were already discounting strong earnings growth in 2020 – without which we would be lucky to see a positive return. With considerable uncertainty over the speed and extent of the recovery in corporate earnings this year and with heightened global tension, the risk is that in the short-term what are increasingly momentum-driven equity markets overshoot.  With the US S&P 500 now just 7.8% off its 12 month high, further upside may be hard to achieve in the short-term.

There has been significant speculation throughout May about whether the Bank of England would be willing to move the base rate into negative territory. This is shown by the 2 year yield in the UK which actually trades at -0.04% which implies that the market believes that the UK will have a negative interest rate in the near future. This is in part due to the comments of BoE officials which have failed to rule out the possibility of negative rates as they have in the past.

Equity markets carried the positive momentum from April through to the end of May as the UK top 100, 250 mid-cap and all UK shares indices returned 3.34%, 3.67% and 3.42% respectively aided by a 1.99 fall in sterling versus the US dollar. Material and Industrial stocks benefited from easing restrictions around the globe; financials and energy exposed companies were the detractors over the month.

The UK Manufacturing PMI rebounded to 40.7 in May, from April’s record low of 32.6. However this still indicates a contraction to the sector due to the ongoing constraints. Output, new orders and exports fell at slower rate than in April, although job losses were at their second steepest on record. Weaker oil prices helped to offset input cost inflation caused by supply chain disruption. Business sentiment rose to a three month high.

In what is usually a busy time for the housing sector; completed transactions halved in April to 38,060, the lowest level since records began. Restrictions in England were eased on estate agents mid-May and as expected there was a surge in demand from potential buyers. The full impact of job losses, reduction of income and the economy as a whole is still to be seen, leaving the prospects for a more buoyant housing market in doubt.

The Bank of England voted 7-2 to keep the main lending rate at a historic 0.1% and to continue the £200bn purchase of UK Gilts and corporate bond purchases.

The Eurozone Manufacturing PMI recovered to 39.4 from April’s low of 33.4, though this still signals a contraction in the sector. The falls in production, new orders fell and export sales eased somewhat from the prior month. Input cost charges fell at its fastest rate in four years amid the collapse in oil prices. Business confidence for the year ahead rose to a three month high across the sector.

Eurozone inflation dropped to 0.1% in May, the lowest in four years as Europe came to terms with Covid containment measures. The biggest detractor to the measure of daily living costs was the aforementioned collapse in oil prices, with food and alcohol prices also rising below the previous months reading.

At present we continue to be neutral in our European equity exposure with a bias towards larger companies with diverse and multinational revenue streams.

Equity markets continued to rebound, as investors discounted the current weak employment and investment picture, and began to look through to a pickup in economic activity. All three major indices were ahead, with the technology heavy NASDAQ again leading the way (+8.47%). The S&P gained 6.89%. Low interest rates, liquidity injections by the central bank, and generous fiscal and taxation policies by government were all factors in the market rally. Oil prices also rose from depressed levels. Valuations have recovered sharply from the lows, and corporate profits will need to kick in to sustain the rally that we have seen.

Having largely bypassed Japan the month ended with a very small uptick in Covid -19 infection rates hitting the news but economic recovery will be more dependent on the recovery of manufacturing activity, which remains a significant part of the economy. That is only part of the story though, with bonus payments in the good times having a multiplier effect on consumer demand.

Exports in the latest month available, April, fell 21.9% over the year after falling 11.7% in March.  April saw demand collapse in Europe, the UK and US as they all locked down their economies.  Based on those economies now re-opening this should be close to the bottom and the modest difference between the Manufacturing Purchasing Managers Index (PMI) for May which came in at 38.4 and April’s 41.9 suggests that while May was also weak there has been no significant deterioration.  Readings below 50 indicate a contraction so this is case of the contraction slowing rather than a recovery yet.

The scale of the decline in the services sector is greater though again the rate of decline has abated slightly.  The May PMI of 25.3 is modestly higher than April’s 21.5.

Clearly there is tremendous scope for Japan to benefit from the end of lockdown, restocking and pent-up demand.  However, the duration of those will be more important.  If global unemployment rises and demand falls sufficiently then the effect will prove short-lived and Japan’s key problem – surplus global manufacturing capacity – will return to plague it.  For now we support the recovery and expected strength of the Yen relative to Sterling over the year end as we Brexit.

Japanese equities returned 9.7% over the month to a Sterling investor.

Emerging Markets followed the global trend in May, with the index up 3.02% for the month – a 12 week high, recapturing around half of the losses seen since March.

Currencies in the region strengthening against the US dollar in May, on beliefs that a vaccine for the coronavirus will be developed in the near future and after a number of economies began to reopen (such as South Africa and India). That being said, the pandemic is far from over in countries like Brazil (with the most cases globally ex-the US) and Russia – with Mexico’s cases also spiking last week.

The US set out to punish China for the treatment of Hong-Kong, but President Trump stopped short of retracing the Phase-1 trade deal. This saw Chinese blue chips bounce, along with shares on the Hang Seng. We continue to monitor the US-China relationship in the run-in to the November US election.

Our view remains to focus on funds invested in quality companies operating in a secure macro environments – avoiding the weaker Emerging Market economies.

The commercial property sector is one that has faced a number of challenges as a result of the coronavirus and as a result we maintain an underweight position. The working from home situation that companies find themselves in has undoubtedly accelerated a shift in working habits that we believe will weigh on demand for office space for years to come.

The alternatives part of a portfolio continues to play an important role given the uncertainty that currently surrounds the coronavirus and global economy. One of the key areas for us within this is gold and we believe the long term drivers remain strong for the precious metals as central banks around the world continue to do quantitative easing on an ever increasing basis.

The 42.6% return on oil reflected a return to normality from the extraordinary position where supply so exceeded demand that at one point the price of the near month oil futures contract actually turned negative, with sellers forced to pay to get rid of contracts due to expire imminently.  In the short term the major producers remain at odds over production volumes and price but at close to US $40 a barrel for Brent Crude the price is still circa 45% down over the year and helping to stimulate the recovery.