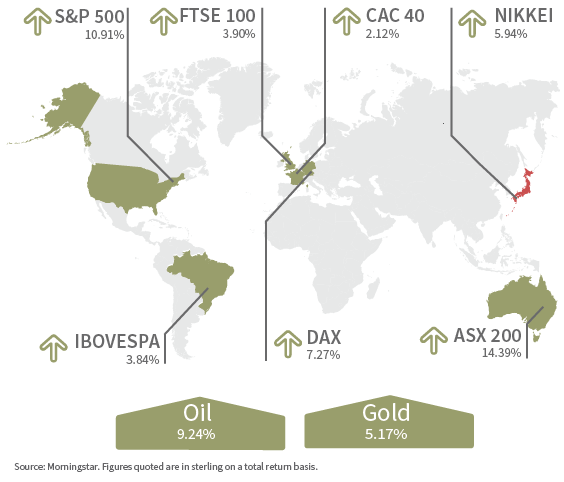 Posted on 11 May 2020 by WH Ireland Wealth Management

The recovery in equity markets that began six weeks ago continued during April as the panic selling that so characterised March was replaced by optimism on news that remained broadly positive.  The policy of lockdown has been as successful in bringing down the fatality rate in western economies as it was in China and governments globally have launched economic stimulus and support packages on an unprecedented scale.  There have even been modest advances in treatment.

For the past six weeks investors have largely ignored bad news as they looked across the second quarter of the year’s V-shaped chasm in economic activity to the third and final quarter, where we have largely exited lockdown and are returning to business as usual. Or at least to ‘new normal’. What follows now is a period where much of that bad news arrives in the form of company trading updates, economic statistics and business surveys that simply show what we already suspect but nonetheless will dampen the animal spirits needed to propel markets higher.

Over the month the UK top 100 companies index returned 3.9%, the MSCI Europe ex UK 4.6% and the US S&P 500 Index, with its large technology sector, 10.91% to sterling investors.  Rallies have been very much in line with our expectation that we would see a technical rally of 30% to 50% of the fall after which investors would need yet more positive news to make further progress and the slightly more defensive central asset allocation we adopted at the start of the month.

The market for global government bonds has been calm of late after the significant falls in interest rates that happened at the start of the coronavirus. Short term interest rates for the UK and the US are both near 0.0% and this does not change for long-term rates which are also near 0.0%. In fact, the 10 year yield in a US government bond is around the 0.6% mark and we believe this will remain the case for the foreseeable future as central banks’ quantitative easing programs, which buy government bonds, keep prices supported.

The region, as ever, represents the riskiest component of international equity and we remain slightly underweight our PIMFA benchmarks across all risk levels.

April provided some respite for UK investors as the UK top 100 companies, UK top 250 shares and UK All Share Indices returned 3.9%, 9.2% and 4.9% respectively. Healthcare and Consumer Staples were the biggest contributors to the main markets gain, whilst unsurprisingly the Energy sector was the largest detractor as oil prices capitulated over the period. Sterling continued to rebound from March’s 35 year low as it appreciated 1.40% against the US dollar.

The UK Manufacturing PMI recorded its steepest contraction on record falling to 32.6 from the previous figure of 47.8. There were record falls in new orders, output, employment and new exports. COVID-19 was cited as the single biggest factor to the declines with consequences ranging from staff shortages, weakened demand and in some cases companies shutting their doors. Tightened border controls and a reduction in global freight pushed vendor delivery times out to the greatest extent on record.  Confidence across the sector was slightly up, with business indicating that any easing of restrictions may help to restart global economic activity.

The national lockdown on non-essential services brought the housing market to a halt in April. An estimated £82bn worth of housing transactions were put on hold in what is usually one of the busiest times of the year for the property market. Agreed sales stood at a tenth of the normal level in a period known in the trade as the “Spring Bounce”. Zoopla, the online property portal, expects the total level of completed sales this year to be half that of 2019.

April was a broadly positive month for sterling investors in Europe with Germany’s DAX the best performer, returning 7.27%, France’s CAC 2.12% and Italy’s MIB 0.9% in sterling terms.  The broader MSCI Europe ex-UK Index gained 4.6% over the period. Although it was good to see a return to more positive figures, returns were dampened by sterling’s 2.16% gain against the euro.

The Eurozone Manufacturing PMI suffered its steepest fall on record, down to 33.4 from 44.5. Government imposed containment measures throttled new orders, purchasing activity and export orders which all contracted at record rates. Business confidence for the future was at fresh lows when surveyed.

Preliminary estimates saw Q1 GDP across the bloc contracted by -3.8%, the fastest drop on record and a deeper drop than that seen in the Financial Crisis. Spain, Italy and France also suffered the biggest falls on record with the latter entering a recession.

The market staged a dramatic recovery, in tune with the extreme volatility seen in the recent period. This was despite a weak economic picture, with surging unemployment, profit warnings in the corporate sector and a precipitous decline in industrial production and consumer spending, The COVID-19 virus continued to impinge on the general population, both through high infection and casualty rates and the imposition of restrictive lockdowns on movement and activities. The technology heavy NASDAQ was again the best performing index, returning 13.3% but it was noticeable that the other, more economically sensitive sectors also took part in the rally. The Dow Jones Industrial returned 9.2% and the S&P 500 by 12.82% in sterling terms. In part this reflected the supportive interventions by the authorities to provide liquidity, tax breaks and other fiscal incentives to the corporate sector. But it also reflected an element of “look through”, as investors began to position their portfolios for an end of lockdown and a resumption of economic growth.

The trajectory and shape of any recovery will determine the nature of equity returns going forward. Some commentators point to a scenario of a sharp down turn followed by an equally quick recovery. However, with high levels of unemployment, elevated government and corporate debt, and structural challenges visible across many strategic industries, risks remain and will challenge equity investors.

For a while it had looked as if COVID-19 had largely bypassed Japan but the same cannot be said for its economy, which is now expected to contract by 3.5% this year rather than grow at the 0.45% rate forecast just three months ago.  Although there are growing fears of a second wave of infections the Nikkei Index rallied in line with other markets, returning 5.9% on the month.

With Emerging Markets bouncing back 7.1% in April almost 50% of the COVID-19 induced fall has now been recovered. That is not to say all is well in the region; inevitably economies will recover at different paces.

China and South Korea have been the stand out performers in tackling the virus so far, whilst Indonesia and Brazil have suffered more than most due to their poor responses. India is set to end its nationwide lockdown this month, with some restrictions already easing in urban areas with no new reported infections.

The G20 have been urging private investors to align with ‘richer’ governments in suspending repayments on bilateral official debt for 73 of the poorest countries. This will be difficult though. Some analysts predict that as much as 36% of bonds in the benchmark EM index will default over the next 12 months.

The commercial property sector is one where we have decided to move to an underweight position this month. There are clearly a number of challenged sectors as a result of the current crisis but property is one that we think will be affected for a number of years to come. The retail part of the sector has been difficult for a long time but the increased digitisation of businesses as a result of home working we think will decrease demand for office space going forward. This has historically been a more stable part of the property sector and a negative outlook has resulted in a move to underweight.

The alternatives part of the portfolio play a key role in diversifying the portfolios and this is never more crucial than in times of uncertainty as we are experiencing currently. One of the key areas that we are currently focused on at the moment is the role of gold. The gold element of the portfolio is one that provides the portfolio with good diversification benefits at the moment as we believe it will do well if the actions of central banks and governments fail to stimulate the market and the economy, it is for this reason that we have decided to increase our allocation this month.

Oil was very much in the news with supply still far outstripping demand and a shortage of storage space. For a short period the price actually turned negative as sellers were forced to pay buyers to take delivery of it.  In normal circumstances a 65.3% fall in the US dollar price of a barrel of Brent crude oil over a year would not only be remarkable but would provide a very powerful stimulus to the global economy.  But with economic activity suppressed, particularly road travel and airlines, the impact has been minimal.