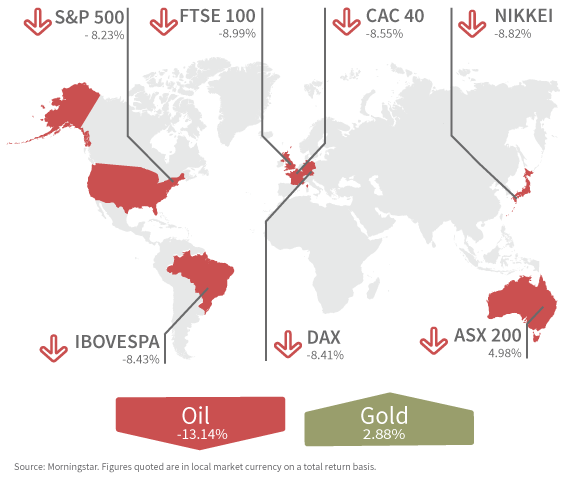 After a promising start to the year in early January, gains in equity markets turned to losses during February as realisation dawned that the Coronavirus, or Covid-19 as it is now known, would slow economic growth and reduce corporate profits. Initially its impact on financial markets largely depended on their proximity and economic exposure to China, with investors working on the basis that it would progress in a similar way to the 2003 outbreak of SARS, eventually petering out with limited impact on the global economy.

Its later appearance in Italy and other countries sparked wider recognition that the virus has spread and led to investors adopting a ‘Risk off’ stance, where more cautious investors reduce their exposure to equity markets and potential buyers step back on the expectation of lower prices. With no let-up in the news and the prospect of severe global economic disruption growing, the last week of February saw a significant sell-off in global equity markets.

While the eventual impact of both Covid-19 and the lock down policy is unknown, what is clear is that corporate profits in the first half of the year and beyond will be lower than previously expected, fully justifying a correction in equity markets that were only recently hitting new highs. Should the virus continue to spread, the effectiveness of and need for the lock down policy will increasingly come under scrutiny and, on any suspicion of change, investors will rapidly shift to a ‘Risk on’ stance, with potentially significant gains in those parts of the market most hit by the policy.

Meanwhile, the authorities have made clear there will be no repeat of the 2008-2009 mistakes that led to a wider credit crisis, promising significant injections of cash to the financial system and lowering interest rates to ensure companies remain able to pay bills and trade. Hong Kong has even gone so far as to give every resident HK$ 1,200 cash to ensure traders, the self-employed and others can make payments.

Global government bonds rallied strongly in February as the market anticipates central banks will act as a result of the coronavirus spread throughout the globe. The expected slowdown in economic activity means that central banks will likely cut interest rates, which has resulted in this strong positive performance for the bond market.

UK equity markets were not immune to the global sell-off as they tumbled to multi year lows: the UK top 100 companies down 8.98% and the top 250 and all UK indices shedding 8.51% and 8.89% respectively. All sectors of the main market fell sharply with the biggest detractors being the Energy, Financial and Consumer Staple stocks. Sterling weakened 2.9% against the US dollar over the month.

The UK Manufacturing Purchasing Managers Index (“PMI”) came in at 51.7, narrowly below an estimated 51.9 but beating the prior month’s figure of 50. The reading indicated the fastest rate of activity in the manufacturing sector in nearly a year, bolstered by the largest increase of new work orders for eleven months on the back of a continued recovery in a more certain political environment. Overseas demand fell for the fourth consecutive month, mainly attributed to the Covid-19 outbreak in Asia. Supply chain and vendor delivery times were also negatively impacted due the ongoing contagion threat. Ending on a more positive note, the level of business optimism was at a nine month high as the sector looked to new investment, product launches and improving market conditions.

House prices grew at their fastest rate in eighteen months as they increased 2.3% year on year, with the average price now at £216,092 according to Nationwide. Demand has been bolstered by the election result in December, and is increasing despite lacklustre Q4 GDP figures, although any further short term growth in prices will depend on the UK/EU trade talks and of course the impact of Covid-19.

We retain our exposure to the UK equity market through high quality companies, which have been chosen on a mixture of qualitative and quantitative factors, and which we believe will remain fundamentally sound through the ongoing market volatility.

The Manufacturing PMI for the Eurozone beat expectations with a figure of 49.2 and was above the January’s reading of 47.9. It was the thirteenth consecutive month of contraction (i.e. a PMI reading below 50) as both output and new orders shrank again. Covid-19 impacted supply lines as delivery times of inputs rose for the first time in a year. Employment levels across the sector fell for the tenth month in a row. Business sentiment was slightly lower with Germany and France registering the lowest confidence levels across the region.

Eurozone inflation dipped to 1.2% in February from January’s 1.4%. The easing of consumer prices can be mainly attributed to the fall in the price of oil and commodities as response to global demand weakening.

The investment scene was dominated by the coronavirus outbreak, which spread from China, and became a serious global health issue, akin to previous pandemics such as SARS and Ebola. Heavy selling of equities was seen across the board, as investor sentiment moved swiftly to a ‘Risk off’ stance, and investors sought safe havens in traditional assets such as gold.

All the major indices fell, the worst being the Dow Jones (down 9.75% in USD terms), which is heavily exposed to cyclical sectors such as capital goods and airlines. The broadly based S&P, which includes financial shares, fell by 8.23%, and the Technology heavy NASDAQ retreated by 5.78%, both in USD terms. The oil price fell by 13.14%, reflecting concerns over global demand, whilst gold increased by 2.88%, again both drops are given in USD terms. There was strong buying of US Treasuries, which approached all time low yields as “safe” assets were bought.

In the short term, it is likely that the US market will retain a cautious bias, with high volatility until there is a clear evidence that this critical health crisis is under control. Taking a longer term view, such sell offs have often provided buying opportunities as value emerges and quality assets can be purchased at distressed valuations.

With a large manufacturing sector, Japan is particularly sensitive to any interruption to the flow of parts to its manufacturing plants. ‘Just In Time’ manufacturing processes mean there is very little stock held locally, while the use of sub-components means that a shortage of even the smallest of parts further up the chain can halt production completely.

The Japanese stock market rose at the start of the month before falling victim to the gradual spread of the virus and concerns over supply chain disruption. It joined the sell-off in the final week to close 8.82% lower over the month in Yen terms.

With global markets suffering their worst week since 2008’s financial crisis, February was a poor month for emerging markets, down over 6% as a result of fears coronavirus may trigger a global recession.

Some analysts have modelled in a severe but brief hit to global growth (as seen with SARS and swine flu) whereas others believe that China’s new found importance on the global economy stage may result in longer lasting implications.

Should there be a global recession (i.e. GDP growth below 2.5%) the usual flight to quality would leave Emerging Markets looking severely weakened. In this event, we would look to funds investing in ‘closed economies’ such as India and Brazil (not overly reliant on trade) and defensive sectors.

It is unlikely that we have seen the end of this volatility, however it is important for investors to be mindful of their time-horizons and look at opportunities in Emerging Markets when they present themselves.

The property market had a tough month along with most assets globally as fears regarding the coronavirus caused indiscriminate selling.

The reaction of gold to the outbreak of the coronavirus was initially very positive as investors bought the precious metal, but has turned weaker as the sell-off has intensified.