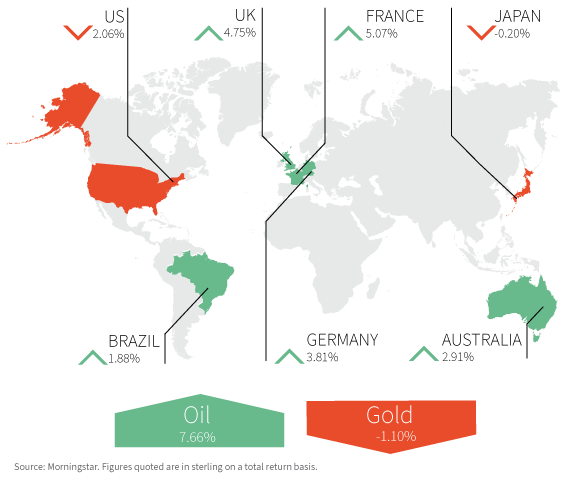 A new wave of Covid restrictions and changes in central bank policy meant that markets continued their volatile ride into December. The Omicron variant has so far proven to be more transmissible yet less deadly than previous mutations. As such, new measures have been enacted to slow its spread and allow for booster vaccinations, particularly in Europe.

Western central banks have pivoted markedly towards being more hawkish as inflation continued to rise in the US and the UK. On the other hand, China began to ease policy as growth slowed.

Geopolitics continued to threaten further escalation, be it US-Sino relations or the threat of a Russian invasion into Ukraine.

Equity markets were broadly positive on the month, although not without volatility. The last third of the month has seen a broad rally, helped by thin liquidity and increasing confidence that Omicron poses less of a threat than first feared. Yields rose and US technology lagged somewhat, leading the way for outperformance of European and UK shares.

Government Bond yields rose strongly from the Omicron inspired collapse in the last week of November. There were two major reasons for this. Most importantly was that even as cases rose exponentially the symptoms were mostly much milder and therefore restrictions were generally not as severe as in prior COVID outbreaks. So although short term economics were impacted it was not to the extent of prior outbreaks. Secondly, despite the economic dislocation mentioned above the Federal Reserve went ahead with its tapering of Quantitative Easing and the Bank of England enacted its first post COVID rate increase.

The big exception to the trend of rising rates was in China where the authorities are beginning to gradually cut interest rates and ease monetary policy in response to the economic slowdown they engineered becoming a little more worrisome than planned, particularly in the heavily indebted property sector.

In the immediate term, we would expect the December trends to continue in light of most of the globe being close to the peak of Omicron disruptions, underlying growth being reasonably strong and the Chinese authorities incrementally providing more support for their economy.

Large cap and mid cap UK shares produced robust performance of almost 5% in December to cap off a year in which investors enjoyed returns in the high teens. During the month investors shrugged off the impact from Omicron and the first Bank of England interest rate rise since the pandemic began.

Early in the month evidence of robust underlying conditions were evident in each of the UK Services New Orders and Retail Sales Volumes data releases.

Although economic data worsened later in the month investors took comfort from statistics from South Africa which indicated symptoms of Omicron were mild for most people. Later, UK based studies backed these findings up thus enabling investors to deem any economic impact to be short lived.

Despite the very respectable absolute returns generated by UK equities in relative terms they were only middling and indeed suffered outflows at various times during the year.

As investors garner increased confidence that the effects of COVID are indeed diminishing over time then the UK market seems ideally poised to attract further investor attention, especially if a compromise on the Northern Ireland protocol can be reached with the EU.

We remain overweight going into 2022.

Barring early Covid concerns and a mid-month wobble around the US Federal Reserve’s hawkish pivot, it was a strong month for European equities. German manufacturing beat economist forecasts as the industrial side of the European economy held up well despite a new wave of restrictions on social mobility across the continent.

Political risk appears to have diminished in the short term following the formation of the coalition in Germany and Mario Drahgi’s success in delivering a $36 billion stimulus package in Italy. However, April’s French election looms on the horizon and the prospect of further Russian aggression in Ukraine remains very real. We will be keeping a close eye on both. Overall, we are fairly constructive on European equities in 2022. The economy is leveraged to strong economic growth and a recovery in global trade that we expect to come through as supply chain constraints are alleviated. The release of stimulus via the recovery fund will aid domestic growth, supporting equities in the process.

Like other markets, the US reacted mainly to central banks and the Omicron variant over the month. This caused a bifurcation in the market, as the large cap technology shares lagged while other parts of large cap held up much better. Interestingly, the small cap and domestic companies did not fully participate in the upside, despite the lack of new restrictions in the US and the signs that Omicron was significantly less deadly than previous strains. This news caused a melt-up towards the end of the month as liquidity dried up over the Christmas period.

Valuations in the broader US market remain high and we are cautious moving into next year as the tightening cycle begins. Higher bond yields, strong domestic growth and potential regulatory headwinds in certain sectors may favour a rotation away from the highly rated success stories of recent years and into previously unloved areas further down the market cap spectrum.

Asian shares produced solid positive returns on the month with the more developed markets of Singapore, Taiwan and Korea returning over 4% whilst India and Shanghai rose just over 2%.Even Vietnam, which has been a very strong performer for the year, advanced another 1% despite the imposition of further COVID related travel curbs.

Japanese shares were up by over 3% during December.

The Korean market was strong despite another rate increase being put in place in late November.

Hong Kong was one of the weakest markets in the region, underperforming mainland shares as investors grappled with the Evergrande property fiasco and whether the authorities are doing enough to end the slowdown in mainland China GDP growth. Chinese authorities have been through several similar slowdowns and we therefore view it likely they will end up tweaking policy enough to stabilise growth, albeit at a slower pace than prevailed in the prior decade.

After lagging their developed market counterparts in 2021 many Asian markets look cheap on a relative basis. As COVID restrictions ease and policy tightening comes to an end investor enthusiasm should return to the benefit of equity markets in the region.

After falling steeply towards the end of November it was a strong month for oil prices. Brent oil rose over 10% during the month and WTI Crude followed suit, including its strongest run for 10 months as it rose by 12% in just six trading sessions.

Gold edged upwards in December, hovering around the $1800 mark after shooting above $1850 and then back below $1800 in November. After rallying to an all-time high last year, in 2020 the precious metal has suffered its first annual decline in three years. This has occurred despite real yields remaining low, although, the prospect of hawkish central banks and rising real yields next year is sure to have weighed on sentiment. For this reason we are cautious on prospects for precious metals moving into 2022.

The UK housing market was on track for its strongest year of house price gains since 2006 following another strong month in December. It is expected that, as household savings are spent and demand for new homes begins to fall off next year, 2022 may be a slightly slower year following two strong years of house price growth.