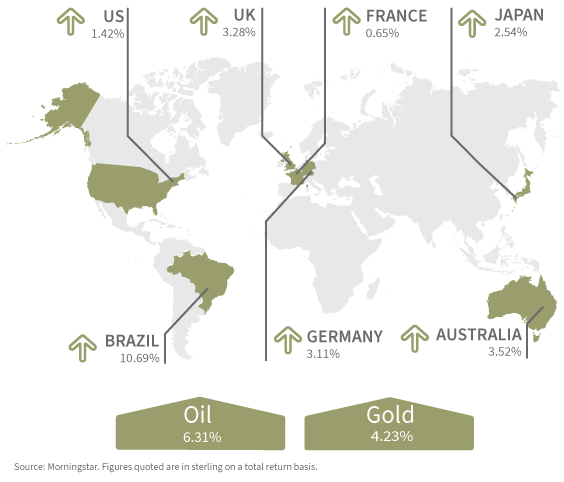 The final month of the year saw further strong gains in global stock markets, driven higher by the announcement of Covid-19 vaccines, the prospect of normality returning by the end of 2021, and, in the shorter term, by the promise of substantial economic stimulus packages in the EU and US. Global equities returned 2.26% in December with the UK returning 3.86% and US 1.42% in sterling. The news also triggered strong gains in the price of crude oil and commodities, though they remained below their levels at the start of the year.  As one would expect defensive assets, primarily fixed interest and alternative assets, underperformed shares.

Contrary to what one might have expected in such a challenging year, globally shares ended the year higher with a return of 12.74% in sterling. Returns in individual countries varied significantly, with the largest returns found in those countries with the highest proportion of technology stocks and technology-enabled companies and the smallest in countries with a high proportion of oil stocks. The US technology indices led the field at 44.28%, powered by global technology companies and tech-enabled companies including Microsoft, Amazon and Apple, all beneficiaries of the huge behavioural changes caused by lockdowns, for example, the growth in online spending and in working from home.  The broader US market returned considerably less at just 14.74%. With very few technology companies, substantial exposure to large oil companies and hit harder than many by the virus, the UK stock market lagged others. The market returned a negative 9.82%, pulled down by the largest 100 shares, which returned a negative 11.55%. The current consensus is that 2021 will be a year of strong global economic growth as western economies continue to recover from lockdowns. That should translate into further recovery in the shares hit hardest by controls aimed at slowing the spread of the virus, limiting the impact of technology shares this year.

The very high valuation of fixed interest securities globally is also helping to drive share prices higher, in particular the price of government bonds such as UK Gilts. For many years, the fixed interest securities in a portfolio provided a counterbalance to the shares. When the recession struck, falling share prices were offset by gains on fixed interest securities on the expectation that the authorities would lower interest rates to stimulate the economy. The Global Financial Crisis that started in 2008 saw interest rates fall close to zero but also the large scale buying of fixed interest stocks by Central Banks. It was this and other lessons learned during that crisis that allowed the authorities to respond so rapidly to last year’s crisis, financing furlough schemes and corporate support schemes that reduced job losses and business bankruptcies.

While the economic effect has been positive, it has come at a cost: Investors are increasingly questioning the stability and future value of paper money. Concern is rising that creating so much new money will lead to inflation rising above the 2% target, possibly much higher. Today, with yields on fixed interest securities close to zero and in some countries actually negative, many fixed interest securities virtually guarantee a loss when inflation is taken into account.  As a result, money that might previously have been invested in the ‘safe haven’ of fixed interest is now finding its way into assets that offer the prospect of a positive return after inflation: shares, commodities, index-linked bonds, and alternative assets with similar characteristics.

In our view, the combination of a strong economic recovery, low-interest rates, and investors’ focus on inflation-proof assets provide a positive background for equity biased multi-asset portfolios this year.

December was a quiet month for fixed income assets with government and corporate bonds returning small positive returns. The extremely low interest rate environment provided by central banks looks set to continue in 2021 but the potential threat of inflation does look to be increasing. The combination of central bank support with the pent up demand associated with the reopening of economies in the latter half of the year, when a vaccine will have meaningful penetration, mean that there is a credible argument for higher inflation over the next 12 months which could undermine very low long term interest rates.

In many regards, the UK stock market was hit by the perfect storm in 2020 with its lack of technology shares, large exposure to global oil companies, and large services sector all contributing to a poor year. However, it would be wrong to ignore the arrival of positives in the final quarter of the year that creates a more positive outlook.  The Covid-19 vaccines herald the 2021 return of the travel, leisure, air, and tourism sectors together with a rise in demand for oil. The late December agreement of a trade deal with the EU removes one of the greater uncertainties international investors used to justify simply ignoring the UK stock market completely. In many cases for the past four and a half years. Finally, the speed of the Covid vaccination program is sending a message to all that the UK is not quite the mess the press portray.

European shares returned 2.07% in December, making 8.2% for the year. The month saw the final approval of the Multi-annual Financial Framework, the EU’s seven-year budget, worth just under €1.1 trillion and the €750 billion Covid-19 recovery fund, known as next-generation EU which has been held up since the summer by dissidents Poland and Hungary.

The year ended on a positive note, with all three major indices ahead. Technology shares returned 2.65% in sterling and 5.11% in dollars and were the strongest performers though the broader market was also ahead with a return of 1.42% to make 14.75% for the year. The confirmation of Joe Biden’s victory, after a fractious and difficult election process, provided some stability on the political front, as did cross party moves towards releasing a new fiscal stimulus package. The economy continued to recover but Covid-19 infection numbers rose and its impacts were still being felt in consumer and business activity. How the new Biden administration deals with these public health, economic and other challenges will set the tone for markets looking into 2021.

The experience of emerging markets this year has varied enormously with the South Americas hit hard by Covid-19 but Asia surprisingly lightly, having implemented the lessons learned by the 2003 SARS outbreak.  December saw emerging markets return 3.69% to make 11.93% for the year as investors bet on a return to consistent above average growth during the recovery from Covid-19.

After the positive long-term news of a vaccine in November, the property market had to digest some weaker immediate news in December with respect to the virus. The pickup in the case has resulted in the closure of non-essential shops and businesses, which will have a knock-on impact on the rent paid to landlords.

The performance of gold in December stood out in the alternatives sector with the precious metal increasing 6.72% in US dollar terms, which came back into favour following a weak period over the last six months.