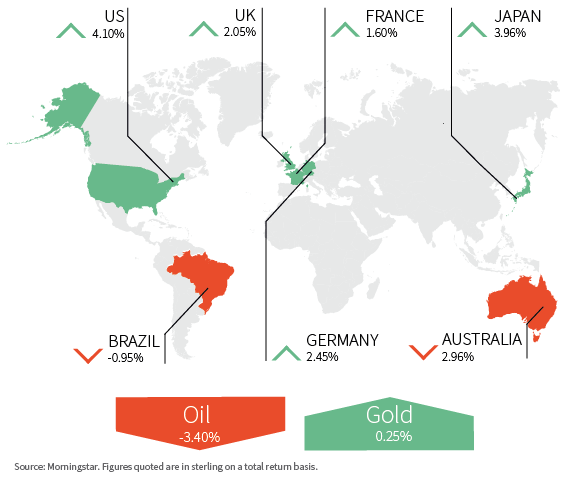 August was a positive month for markets on the face of it. US markets were up strongly with the S&P up over 3% and the Nasdaq even more so as concerns of an early taper by the Federal Reserve appeared to dissipate. In Europe, markets were more sanguine as German politics began to take centre stage, in some polls the SPD party even moved ahead of Angela Merkel’s conservatives. UK markets were a little more positive, particularly in the mid-cap space and in Asia, despite a continuation of July’s fears over the Delta variant and further Chinese regulatory scrutiny, markets also ground higher. Chinese growth continued to slow, although indications were that any tightening had peaked and there may be a more accommodative stance towards the end of the year particularly given that parts of China had reinforced restrictions after local Covid outbreaks. Japan was also hopeful of more stimulus as Prime Minister Suga’s popularity waned. US 10-year treasury yields edged higher over the month from extreme low levels to settle around 1.30%.

Yields rose modestly across the globe over the month but generally remain well below the levels prevailing before the Federal Reserve comments of June 16th which fuelled investor angst about Central Banks’ reducing the amount of bonds they hold on their balance sheets (i.e. “tapering”).

South Korea became the first major economy to have an interest rate rise implemented whilst the Chinese authorities made more noises about cutting rates and easing policy as the Delta variant caused several other Asian countries to re-impose varying degrees of restrictions.

Chinese actions to control the power and profitability of the internet and education sector added to the risk off mood there.

The ECB were at pains to tell investors that they will be keeping interest rates very low and enacting QE for some considerable time to come. Partly as a result of this, the German yield curve briefly went negative all the way out to 30 years.

The “Pingdemic” affected some UK economic numbers but yields edged up as employment and job openings remained strong and the Bank of England articulated its exit strategy that involved first raising interest rates and then tapering QE.

The UK market performed well in the month of August, led mainly by mid-cap names, particularly those with a “growth” bias. The UK recovery continued in earnest as economic releases reflected the reopening of the economy and the shift towards services. Job numbers were strong and the services Purchasing Managers’ Index (PMI) survey surprised to the upside, whereas parts of the economy that had been strong in earlier stages of the pandemic began to weaken at the margin, namely Housing, Retail Sales and Construction. The latter was no doubt impeded by the “Pingdemic” that tore through the UK workforce at the beginning of the month, this appears to have abated somewhat now.

Sterling investors enjoyed solid gains from Europe as equities rallied for the seventh month in a row and the Euro appreciated a little against the pound. The ECB promising to keep policy supportive obviously helped, as did the fact that the rampant Delta variant has not hampered economic growth as much as prior spikes in cases did.

Although markets were strong some economically sectors lagged as shortages of both staff and labour curtailed production in key industries such as autos.

On the other hand, more growth-oriented equities benefitted from the ECB comment mentioned above.
In this environment smaller cap stocks continued to outperform.

Shares put in another strong performance over the month despite a renewed Covid spike and mixed economic data being released. Investors were comforted that the economy was strong enough to support profit growth but not so strong as to warrant immediate or accelerated removal of ultra-supportive monetary policy. Furthermore, the chances of even more stimulative fiscal policy increased as President Biden’s $3.5 trillion infrastructure bill made progress through the legislature.

Consensus among investors is now for the Federal Reserve to discuss tapering at their scheduled November meeting and then begin to enact from December onwards. However, it works in practise the Fed will aim to avoid choking off economic growth until after full employment is reached. This should mean any periods of taper related turbulence is likely to be short lived and thus provide an opportunity to add to favoured holdings.

Variation of returns was wide across the region as India, Thailand and Vietnam posted high single digit gains whilst Japanese returns were mid-single digits, as did domestic Chinese bourses. However, Hong Kong, Taiwan and Singapore lagged significantly.

The ramped-up intervention by Chinese authorities in Internet and education sectors was the biggest talking point during the period, followed by the South Korean rate hike.

Given that several countries enacted new anti Covid restrictions the Korean move is likely to be an outlier. Indeed, China is likely to ease policy over the next few months thus easing liquidity in the region and help Asian equities play catch up with the West.

However, investors are likely to remain wary of stocks and sectors that could fall foul of increased regulation in China and therefore it is unlikely previous high valuations will return to such areas anytime soon. Conversely, investors will seek to benefit from investments that the government are backing, including stocks out with the mega cap area.

The price of Gold fell slightly during August as real yields rose off of record lows in July. There was also little in the way of technical support; in the week before the Jackson Hole symposium, Bank of America noted that investors sold the most gold since March.

Oil had a turbulent month, rising and falling in alternate weeks as concerns over the impact of the Delta variant and Hurricane Ida in the US swayed markets. OPEC also released their forecasts for a supply surplus to return in 2022, after a deficit in 2021, adding more downward pressure to prices. West Texas Intermediate suffered its largest price fall since January, down more than 7%, Brent Oil was less affected, down just more than 4%.

The UK property market continues to show signs of improvement as economic activity picks up and as investors see opportunities to put capital to work. Distribution and particularly the ‘last mile’ remains a hot spot as does alternative use. The demise of so many retailers over the past 18 months and the expectation that business centres will be less active when staff return to work with what will possibly be a three day week has created a surplus of office and shop space.  Leading property company British Land spoke of this when it reported the £20m acquisition of the City’s Finsbury Square underground car park which it sees as a future distribution asset rather than a car park.  They also highlighted disposals at or at a premium to book value, suggesting that UK property remains cheap.

The opinions expressed in this communication may differ or be to the contrary of those expressed by other individuals within the WH Ireland Group and they are subject to change without notice. We have issued this communication for information purposes only and it does not constitute financial, professional or investment advice or a personal recommendation, nor does it constitute a solicitation or an offer to buy or sell any securities or related financial instruments in any jurisdiction. No representation or warranty, either expressed or implied, is provided in relation to the accuracy, completeness or reliability of the information contained in this communication, nor is it intended to be a complete statement or summary of the securities, markets or developments which may be referred to. Past performance is not indicative of future performance and overseas investments are subject to fluctuations in exchange rates. The value of investments and the income from them may go down as well as up and investors may not get back what they originally invested.