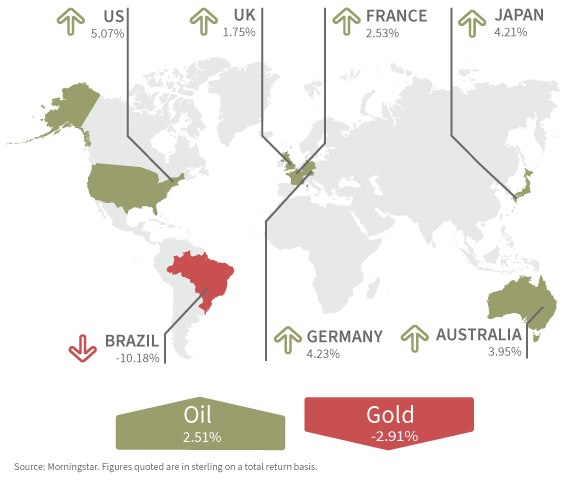 The month saw global stock markets return 4.2% to a sterling investor, led once again by the US market, which returned 5.1%.  Gains elsewhere included Europe with a return of 2.2% and the UK with 2.4%.  Star of the show remained US technology, which delivered a very impressive 9.0% return.

The story globally remains that of a strong economic rebound.  This is illustrated in the UK by the latest data from the Nationwide Building Society, which reported a 2% rise in average house prices in June to make 3.7% over one year. This is not the only sector doing well, with motor dealerships also seeing record orders.

While it is tempting to put this down to pent-up demand that will last a few months then collapse, the ongoing impact of working from home is to leave more money into people’s pockets than when they paid to commute and paid town and city centre prices for lunches, coffees, etc.  This is the positive story that offsets the media and economists’ focus on struggling city and town centre businesses and the expected increase in unemployment when the furlough scheme ends at the end of October.

With the Chancellor’s autumn statement approaching and government borrowing in previously unexplored territory, the government is in a difficult position.  On the one hand, it needs to contain unemployment and then see it decline through the electoral cycle – which argues for low interest rates and more support schemes.  On the other, it needs to bring its use of debt finance under control to reassure international investors, avoid a currency crisis and ensure its cost of borrowing remains low – which argues for higher taxes playing a larger part in funding government spending.  Fortunately, the UK is not the only country facing these pressures, which greatly reduces the chances of return to the annual October currency crisis that characterised the seventies and eighties.

Our view is that higher unemployment is negative but that it will have a smaller impact on the UK equity market corporate profits than many fear.  That is in part because so many of our companies have large international operations but also because the impact of Covid-19 on business was not evenly spread. Sectors that will see the greatest numbers include retail, travel, and leisure, where part-time working is common and earnings are relatively low. Furthermore, companies that reported losses this year will offset them against future profits.

Overall, our expectation is that the government and the Bank of England will remain highly focused on ensuring growth, so interest rates will remain low and we will see selective support for the hardest-hit industries.  Higher taxes or reduced tax breaks must be on the agenda but the promise of more as recovery progresses is likely to be enough to maintain confidence in the medium term.

Fixed income markets had a difficult month in August as longer maturity government bonds decreased in value as yields went up. In a speech at the annual symposium of central bankers known as Jackson Hole, the current governor of the Federal Reserve in the US, Jerome Powell, outlined a new policy framework for inflation targeting. They are now going to be targeting 2% inflation on average now instead of year after year. This means that if inflation is below the 2% target for a period of time as it has been, they will allow it to be above 2% for a corresponding period of time. This is a significant development and the prospect of higher inflation helped contribute to weakness in bonds.

With August typically a quiet month for company news, the market was driven by the ebb and flow of global news around Covid, domestic politics and Brexit, returning 2.4%. The strength of the recovery can be seen in the services PMI number which was reported as 60.1 – more than double the 29.0 reported three months ago.  A number over 50.0 indicates growth.

Performance across Europe remained mixed, with the German market returning  4.2% in sterling and a slightly higher 5.1% in euros.  On the other hand, Spain returned -0.2% as the resurgence of Covid cases once again hit its important tourist industry.  While the manufacturing recovery remained in place though weak, the PMI reported at 51.7, the service sector recovery appeared to slow, the PMI reported at 50.1 versus last month’s 54.7.

The past few months have also see a steady rise in the euro, potentially adding to the region’s problems by slowing growth.

The “bull” run continued, with all three major indices ahead. The technology shares once again led the way, rising 11.2% in local currency,  powered by the likes of Apple Inc. making new highs. The broader market gained 7.2% in local currency. Returns to sterling investors were depressed by strength in the UK pound against the dollar reducing returns in sterling to 5.1%. Once again the US was the best performing global market. Progress was made despite a mixed economic picture and increasing social and political tensions as the Presidential election campaign continued.

Japan’s economy continued to disappoint with the manufacturing PMI reported at 47.2 and the services PMI at 45.0. With both still indicating a firm contraction in activity, Japan is the one country that offers a challenge to the conventional wisdom that lower interest rates are always the best medicine.  Rates have been lower for longer here than in any other region yet still the economy struggles.

Emerging Markets returned 0.2% in August, with market volatility pausing for breath after a volatile start to the year.

However, according to the Institute of International Finance, Capital flows fell more than 86% in August from July’s US dollars 15.2bn due to gyrations in the US-China trade narrative and lack of visibility on a post Covid recovery path.

With the Fed signaling that rates are likely to remain ‘lower for longer’, emerging market central banks have been given head room with their own monetary policy – allowing them to continue borrowing at lower rates to support their respective Covid-induced economic slowdowns. This is not a silver bullet though and a medical cure, not monetary, remains the key to a sustained economic recovery.

Our emerging market equity weighting remains in line, as does our focus on identifying those countries with strong fundamentals, who are likely to recover at a faster pace than their structurally challenged counterparts.

Commercial Property continues to be a very challenged asset class on a fundamental basis with both the retail and the office sectors facing their own difficulties that have been compounded by the coronavirus. The interesting thing to watch is how the market and regulations evolve as we catch up to a changing landscape of how we live, work and shop.

The headline news in alternatives came in gold which after a number of very positive months showed some weakness in August and actually fell. The precious metal has benefitted from the unprecedented monetary and fiscal stimulus around the world as a result of the coronavirus but was due a correction in many ways given the strong performance.