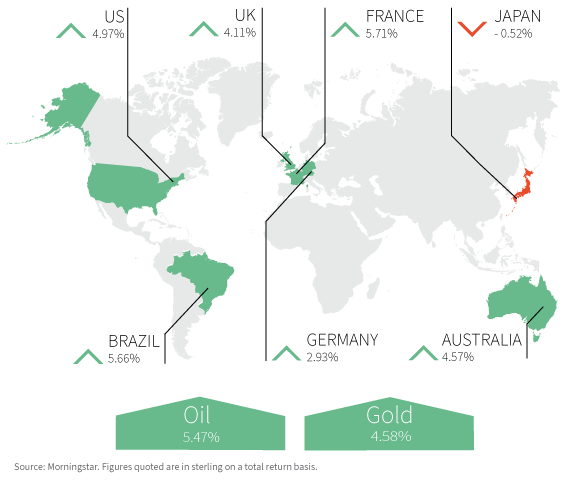 Posted on 12 May 2021 by WH Ireland Wealth Management

The economic recovery post-Covid is beginning to gather pace and nowhere is this more prominent than within equity markets. Another strong month was led by US Equities, which returned 5.0% to a sterling investor followed by the UK with 4.3%. Both continued their vaccine rollouts and consequent economic recovery. Europe lagged slightly, at 4.4% whilst Japan was the one major market that fell during the month, returned -0.5%. Several regions in Japan were placed under a state of emergency after an increase in Covid cases and the Olympics were once again plunged into doubt. After its worst quarter since 2016 Gold returned 4.6%, encouraged by falling real yields and China opening up for Gold imports. Oil returned 5.5% on the month and bond yields were flat in the UK.

Where we have seen recovery, we have seen it come through quite dramatically. In April, Purchasing Manager’s Indices (PMIs) moved above 60 in European manufacturing, UK construction, and across the US surveys. This is encouraging, and evidence from those countries that have run successful vaccination campaigns indicates pent-up demand is being released, for example, restaurant bookings in Texas and Florida are now back above pre-Covid levels. Fiscal policy is continuing to support the recovery as President Biden announced plans for a $2 trillion infrastructure bill.

The pace of market movements has led to a number of technical indicators flagging that, in the short-term, we may be due somewhat of a correction. We are also approaching May and June, months typically associated with weak seasonality, with elevated valuations and high expectations for recoveries. Inflation concerns may well be the cause of such a pullback. There is no doubt that inflation is running through the system, the number of S&P companies mentioning inflation during earnings calls has tripled year-over-year per company and whether it is oil, copper, lumber, freight, or semiconductors, there have been significant underlying price increases. The big question for markets is whether or not these effects are transitory or more long-lasting. At the moment, consensus, and more importantly the Fed, believes the former.

Despite the concerns for markets in the short-term, equities remain our preferred asset class although the dramatic rise in prices over the last twelve months means opportunities are not as compelling as they were last year. However, not all equities are created equal and we must remember that authorities have taken unprecedented action to help the real economy recover from the pandemic-induced meltdown. We should also note that the economic calamity that many had been predicting since about 2015 has finally come to pass and it is likely we are close to emerging out the other side.

On the policy side, the Federal Reserve and the European Central Bank have already made it clear that they are in no hurry to remove their ultra-accommodative stance. When one considers all of these factors in conjunction with gigantic spending targets from China and the US then it is unlikely there will be a dearth of growth globally anytime soon, especially as many companies have used COVID as a touchpaper to rapidly accelerate their rate of change and productivity enhancements. Therefore, we look to systematically add back to equities on any near-term set back of the type, which forms a natural part of a market lifecycle.

Global government bonds had a positive month in April following a run of weakness so far in 2021 with US treasury yield in particular falling. The rebound provided respite for holders of long-dated government bonds following a run of losses due to fears about inflation and the strength of the recovery. This is in part due to the message from central banks, which has been clear they are not in a hurry to tighten monetary policy despite strong growth and inflation number expected.

April saw the reopening of non-essential retail, hairdressers, and outdoor hospitality as the UK continued to relax restrictions on the back of a successful vaccination campaign. Consequently, the domestic economy is starting to see a rebound, led by retail sales which in March posted 20% year-over-year gains on like-for-like sales.

On the political front, the Prime Minister has faced questions over texts sent to business leaders and flat renovations, yet continued to poll well. Some Brexit tensions remain but exports rebounded strongly after the frictions seen in January. The impending Scottish Elections may be a cause of volatility, as the prospect of a second Scottish independence referendum looms.

Positioning remains light in the UK and valuations are cheap relative to other regions. With pent-up demand released after the alleviation of Brexit and lockdown uncertainty, the UK seems well set for a period of strong growth. As such, it is one of our favoured regions at present.

Europe lagged the US and the UK as the bloc began to find their footing in the race to vaccinate its population in time for the busy summer season. Previously dogged with vaccine supply issues, most of Europe began to see cases roll over and the target to vaccinate 70% of the population by July seems to be back on track.

German politics moved into the limelight during the month as Angela Merkel’s conservative party fell to 14-month lows in the polls after unpopular (among the electorate) successor Armin Laschet was chosen.

Whilst there are some concerns about the vaccine rollout, we believe that the recovery in Europe has merely been delayed. The European recovery fund will also begin to take effect in the second half of the year so notwithstanding the political volatility that is likely to come from German and French elections, Europe is beginning to appear more attractive as an under-owned region on the verge of economic recovery.

The core S&P and Dow indices gained during the month, as did the NASDAQ, which rebounded almost 6% as technology shares rallied. Bond yields, which had been a threat to valuations in previous periods, stabilised, and providing a catalyst to equities. In addition, the corporate earnings season was generally positive, with many companies matching or beating expectations. This was despite some concerning economic issues including a global shortage of semiconductors, which caused production cutbacks in industries such as autos; and growing inflationary pressures in the supply chain as a commodity and other input prices rose.

The successful rollout of the COVID 19 vaccine, as well as economic recovery, have encouraged investors to back a positive, growth thesis. The Federal Reserve has indicated they will run an accommodative monetary policy, and not threaten the recovery by raising interest rates too early. Any shift in this stance, perhaps driven by a rise in inflation, could be a threat to the current “bull“ run in equities.

Asian and Emerging Market shares were moribund in April, lagging their Developed Market peers. This was due to a confluence of events. Firstly India, which hitherto had been deemed to have Covid under control, succumbed to a rampant third wave of the disease which took daily new cases to record highs and afflicted the young more seriously than preceding variants. Secondly, Chinese economic growth numbers, whilst strong in nominal terms, missed analysts’ lofty expectations and caused jitters about the impact of the measures the Chinese authorities are undertaking to reign in economic excesses. Thirdly, US interest rates stopped rising and the dollar strengthened during the period. This acted as a further headwind to many capital markets in emerging economies.

All three of these developments are likely to delay but not derail economic improvement in the region and many companies domiciled there stand to benefit from both reopening and a normalisation of global trade.

There looks to be light at the end of the tunnel for the property market, as investors have begun to look for value in the sector. There remain significant challenges ahead with changes in the use of office space being a clear headwind but much of this has been heavily discounted into current prices. There looks to be the potential for strong returns if you can find the right assets from the property market going forward.

Gold had a particularly strong month in April, rising nearly 5% in US dollar terms. This is in part as a result of lower real interest rates which moved down over the month.

Disclaimer: The opinions expressed in this communication may differ or be to the contrary of those expressed by other individuals within the WHIreland Group and they are subject to change without notice. We have issued this communication for information purposes only and it does not constitute financial, professional or investment advice or a personal recommendation, nor does it constitute a solicitation or an offer to buy or sell any securities or related financial instruments in any jurisdiction. No representation or warranty, either expressed or implied, is provided in relation to the accuracy, completeness or reliability of the information contained in this communication, nor is it intended to be a complete statement or summary of the securities, markets or developments which may be referred to. Past performance is not indicative of future performance and overseas investments are subject to fluctuations in exchange rates. The value of investments and the income from them may go down as well as up and investors may not get back what they originally invested.