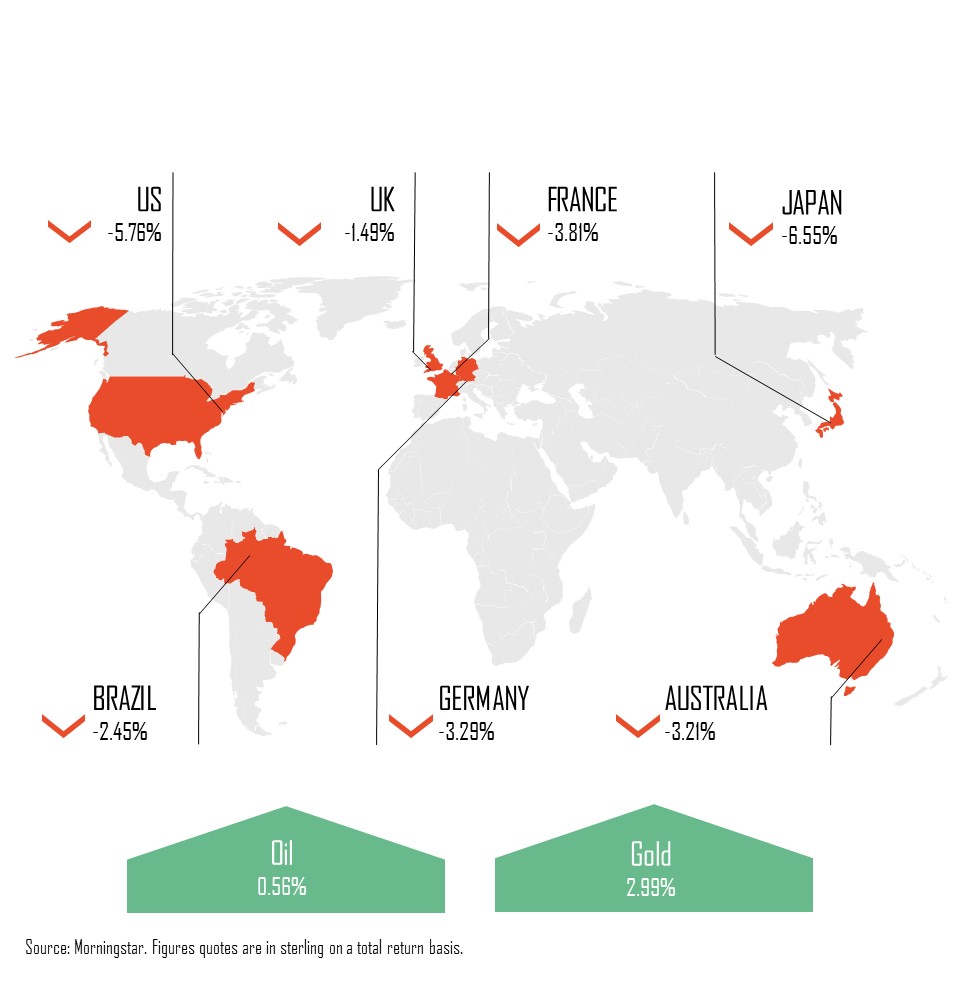 Global markets ended a tumultuous year with another month of languid performance. With the exception of Hong Kong and China, equity markets gave back some of the previous two months’ returns as economic data broadly deteriorated.

Across Asia and Developed Markets there was pressure on retail sales whilst activity surveys in both services and manufacturing remained in contractionary territory. Housing also continued to show signs of weakness, particularly in the US. On a more positive note, Consumer Price inflation declined at a faster rate than forecast by economists in both the US and the UK.

China continued to ramp-up supportive rhetoric as it held its annual Economic Work Conference, stressing a focus on domestic consumption in 2023. However, economic data has thus-far been constrained by a surge in Covid cases.

Bond yields also rose during the month as investors digested the fallout from the US Federal Reserve’s December meeting that suggested interest rates could settle at a higher level than previously anticipated. This was despite a smaller Federal Funds rate rise (of 50 basis points) compared to the previous four 75 basis point increases.

In each of the US, Europe, Japan and the UK ten year government bond yields rose with the rises in Japan and then Europe being most dramatic. Two year yields mostly rose as well although the yield curve steepened (gap between long and short term yields widened).

The big story was Japan where the widening of the band around which yields can fluctuate caused 10 year yields to go from 26 basis points to 48 basis points in two days before ending the month at around 40 basis points. In Germany the 10 year yield rose from under 2% to over 2.5% during December.

These moves were despite the US, UK and Europe upping rates in 50 basis point increments in December instead of the 75 seen in prior meetings.

Apart from the Bank of Japan action, investors were also slightly spooked by the statement from Fed Chair Powell about how high rates in the US may end up.

We can’t say how high rates may go on a very short term, temporary basis but do not expect US rates to be much higher than current levels by the end of 2023.

For the record, after the Bank of Japan’s yield curve control policy change the global stock of negative yielding bonds fell below $700 billion compared to a peak of over $18 trillion in Q4 2020.

How things have reverted some way towards normal!

Both the UK large and mid-cap indices finished down about 1% on the month. For the year the large cap index actually produced a positive return in the mid-single digits. In the circumstances this was very respectable on an absolute basis and was very good indeed against global peers. The index benefited uniquely in the rising inflation, rising rate environment from its heavy weightings in natural resources and banks. Mid-caps, on the other hand, are more domestically focussed and deemed more vulnerable to inflation and the cost of living crisis. They therefore ended the year with a negative return in the mid-teens.

Like in the US, investors in the UK are anticipating a peak in inflation and hence the pace of interest rate rises. The Bank of England duly increased rates by only 50 basis points in December as opposed to 75 at prior meetings. The rhetoric at the post decision press conference was deemed dovish in that the Governor seemed to speak less aggressively with regards the pace of future hikes.

Several mid cap fund managers have written that the current valuations of UK small and mid-cap shares are at levels that have historically augured well for future returns. We share that view for the medium term even as we accept we are in the midst of a cost of living crisis.

European markets drifted lower in December after a strong October and November. The ECB raised interest rates during the last monetary meeting of 2022, marking a fourth rate increase this year however the size of this increase was smaller than at the previous two meetings. Despite this, the rhetoric from the ECB continued to be tough and they are committed to playing the long game in terms of raising rates further to curb inflation. The ECB now expect average inflation in excess of 6% in 2023.

Manufacturing was stronger than in November and indicated the softest downturn in the sector since September, as inflationary pressures eased and supply chains continued to stabilize. Unemployment is still at a record lows and German producer prices posted their first monthly fall in two and a half years in October, according to PPI data released in December, raising hopes that double-digit inflation in Europe’s largest economy could be nearing its peak. Late in the month, Spanish inflation also fell a full percentage point according to provisional estimates which is encouraging.

The Euro lost 7% against the dollar in 2022 having traded as low as $0.96 in September but has since recovered well.

The US ended a dismal year down again in December. As has been the case much of the year, Fed policy dominated the news in the month. A final rate hike for 2022 of 50 basis points left the US benchmark interest rate at the highest level in 15 years and forecasts for a higher terminal rate led to growth equities declining. Technology names were hit the hardest, with the index down over 9% on the month and over 30% during the year.

On the economic front, several surveys pointed to declines in activity and housing also continued its malaise. Labour markets continue to hold up relatively well although there are indications that they too will begin to struggle as the effects of interest rate rises are felt on the economy. These effects will likely dominate the US economy in 2023 as it battles to avoid a recession. Company earnings expectations have been downgraded but less so than elsewhere in developed markets. Valuations also still appear stretched, as such we continue to be underweight the US moving into the New Year.

There was very variable performances within Asian equities on the month as exemplified by the Hong Kong index rising by over 6% whilst the South Korean index finished off its worst year since 2008 by dropping around 9% in December. Japan fell over 6% whilst Indian shares fell low to mid-single digits.

The Chinese Shanghai Index outperformed but unlike Hong Kong it fell a little over the period.

The big news in December was the turn by China on its Zero Covid Policy which should accelerate GDP for 2023 as a whole but in the interim has caused a surge in cases and may cause even more short term economic disruption to both domestic consumption and supply chains across Asia and beyond.

The Chinese government, at its recent Economic Congress, re-emphasised its commitment to grow consumption and support the big platform companies such as Alibaba and Tencent. Such moves should further support the region in 2023.

We are therefore optimistic about the region for the next twelve months whilst being aware of the potential for near term volatility.

Oil had a volatile December, however, ultimately ended the month down from its highs of mid-$80 at the start of the month. The fall in price is a reflection of the market’s concerns over the macroeconomic headwinds, Covid pickup in China, and geopolitics. To elaborate, investors are using contracting PMI data from China as evidence that soaring Covid cases will have an impact on oil demand. Meanwhile, major economic institutions are signalling to the market that 2023 will be a tough economic environment which naturally would suggest demand for oil will be weak. The final blow to the price was Russia’s move to ban oil exports to foreign buyers that adopt the G7 price model.

Elsewhere, natural gas prices in Europe are more than 75% below highs of nearly €350 in August. Storage facilities in Germany were 88.6% full as of 26th of December and the EU average held at above the five-year seasonal average.

Finally, gold has ended the year almost flat at $1,810 an ounce after a turbulent year filled with economic and geopolitical black swans. Gold reached a high of $2,070 in March at the onset of Russia’s invasion and then dramatically fell to more than a 2-year low of almost $1,600 in September due to aggressive monetary tightening around the world. However, challenging and tough economic conditions in 2023 could see the precious metal price rise once again.

The Nationwide House Index reported the final UK property market result of 2022. The building society report that house price growth in the year to December was 2.8%, dramatically down from the 4.4% outlined in November. There was marginally positive news as prices fell by 0.1% in December, an improvement on the 1.4% fall seen a month earlier. Interestingly, December was the fourth consecutive monthly price fall, ‘the worst run since 2008, which left prices 2.5% lower than their August peak’ (Robert Gardner, Nationwide’s chief economist).

Note; All index data figures are sourced by Morningstar and correct to 31/12/2022 unless stated otherwise.