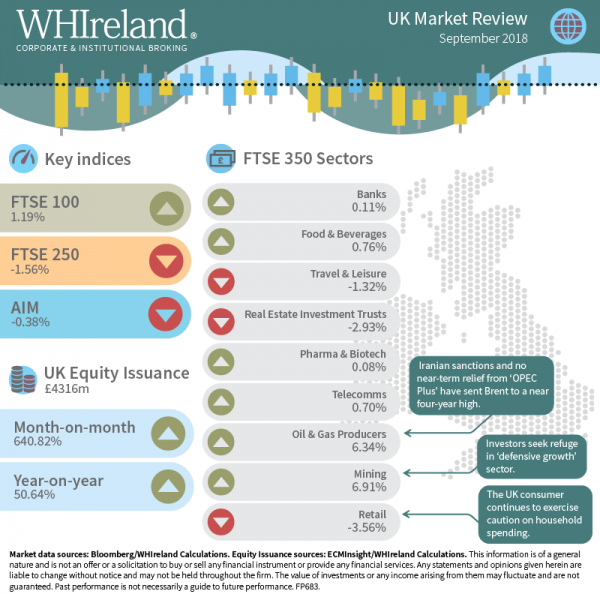 September saw UK equity markets post a very uneven performance. The UK top 100 companies ended the month ahead 1.19%, supported by strong performances in the both the Oil & Gas and Mining sectors. However the more domestically-orientated UK top 250 and AIM posted losses of 1.56% and 0.38% respectively. Earnings momentum continued to cool and the market is becoming increasingly concerned about the outcome of Brexit.

Despite this, the UK economy continues to perform resiliently and, on balance, incoming data somewhat exceeded expectations. However, inflation indicators also ticked up more than expected.

UK equity markets turned in a very mixed performance in September, with the Uk top 100, 250 mid-cap and AIM posting returns of 1.19%, -1.56% and -0.38% respectively. This dispersion of returns was largely played out through sectoral performance, with the Oil & Gas and Mining sectors driving index performance. More UK domestically-orientated sectors struggled by comparison.

The Oil & Gas sector was not far behind, posting a September gain of 6.34%. US-led sanctions against Iran have bitten harder and faster than had been expected and ‘OPEC Plus’ has thus far declined to further increase crude supply to offset the lack of Iranian exports. Brent crude ended the month near a four-year high.

Elsewhere, equity performance was mediocre to poor. UK Banks struggled to make headway in September (+0.11%), despite an appreciable steepening of the Gilt yield curve, and were likely held back by Brexit uncertainty. Similarly, Telecomms managed to post a recovery of just 0.70%, after a disastrous August as markets continue to fret over heightened capital expenditure on network rollouts.

Having showed appreciable strength for much of the year, UK Retail stocks booked a second successive month of losses in September, with a decline of  3.56%. UK Travel & Leisure also fell -1.32%, hampered by a hot UK summer.

The UK economy continued to surprise to the upside based on incoming data in September. While manufacturing and industrial production disappointed, construction and the UK’s large services sector both outperformed. Retail sales also came in stronger than expected, supported by a hot UK summer, and house price growth firmed, albeit on low activity. Public sector borrowing also continues to be lower than expected, perhaps giving the Chancellor greater comfort ahead of the 2018 Budget on Monday 29 October.

As expected, the Bank of England voted unanimously to keep rates on hold at its 13 September meeting. However, its continued hawkish stance, backed by higher than expected wage and consumer inflation data, helped expectations of future rates firm up over the month. This also providing some support for sterling, despite growing Brexit uncertainties.

UK equity issuance increased sharply in September from August’s summer lows, reaching £4316m and representing a 640.82% increase month-on–month and a 50.64% increase on September 2017. Accordingly, the deal count increased to 33 from just 9 in August and was largely consistent with the level seen in September 2017 (34).

At the sectoral level, activity was somewhat narrower with deals in 14 sectors well down on the 19 registered in September of last year. In cash terms, activity has heavily concentrated in Financial Services, Equity Investments and Support Services offerings. Together these sectors constituted nearly 69% of the monthly total at 30.51%, 23.01% and 15.25% respectively. Real Estate Investment Trusts (REITS) made a meaningful return to the market, with the highest level of issuance recorded since April.