Return to growth? “All that glitters is not gold”

Following the election of Donald Trump as President, the financial markets have had a wave of optimism, which has seen the US S&P 500 index up 5% from election day to the end of last year.

Policy detail has been limited to date. Investors appear to have taken Donald Trump’s business experience and vision for the future as a sign the domestic economy will be his number one priority.

The key aspects of his economic manifesto include:

Creating a dynamic economy, with 25 million jobs created over the next decade. He expects that raising GDP 1.5% will raise 18 million jobs above current forecast of 7 million.

Targeting 3.5% average growth per year (the rate achieved between the end of World War II and 2000), with the potential to rise to 4%.

A Pro-Growth tax cut plan: with all income, groups receiving an income tax cut and a million people removed from the low income tax bracket. Family incomes can expect to rise between 3-35%, while the business tax rate is to fall from 35% to 15%.

A decrease in repatriation tax from 35% to 10% will be imposed on companies that re-domicile back to the United States’ tax laws.

The premise of Donald Trump agenda is to stimulate growth by fiscal policy intervention in the form of lower taxes; this is based on economic theory of the Laffer curve (see below illustration). This potentially shifts long-term investment from the public to private sector. It encourages investment from businesses and encourages people to consume more by raising their disposable income.

The Laffer curve illustrates the propensity of an individual to work based on the rate of tax he or she has pays to the government. At a tax rate of 0% or 100% the government receives no tax revenue and in between the two, there is a sweet spot tax rate where government achieves the optimum amount of generated revenue. 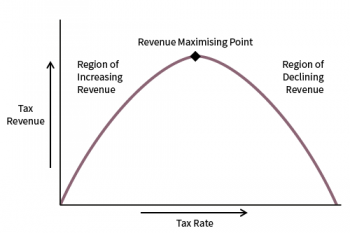 Not everyone is the same, and at a lower tax rate some people will decide to work fewer hours, whilst some will work more. There is no guarantee that the US Government will collect more tax or stimulate greater spending from lowering the tax rate. A case in point is the current state of US citizens registered as searching for work. This is known as the participation ratio and this is close to its lowest levels in the US since the 1970s.

What lower taxes will achieve is lower emigration of people and companies, as well as reducing the incentives to avoid paying tax.

Although there are positives to a lower tax rate and a simplification of the system, it is important to note they do not assure growth. When valuing business we can assume lower tax will enhance profits but again does not guarantee perpetual growth for the simple reason that if a government is not benefitting from a tax arrangement it is not likely to continue with it.

With this in mind, paying premium valuations for equities that already incorporate future growth, could at best limit future returns for long-term investors. Being aware of historic valuations and growth rates are important and could help decide whether higher growth is already priced into a valuation. 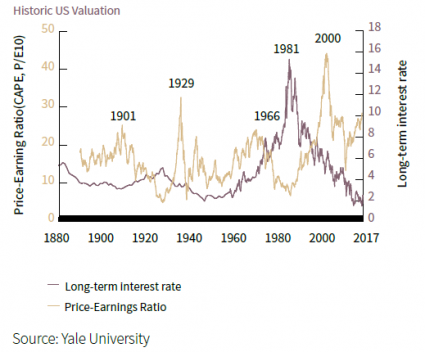