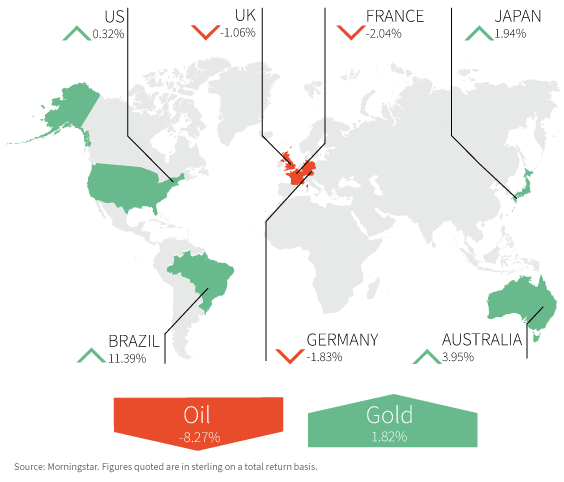 Investors entered the month hoping that early signs of a peak in core inflation in the US and UK would lead to less forceful interest rate rises from Central Banks. Early on in the month government bonds stayed at the lower levels reached in July but after the above hopes were dashed we saw a rise of a full percentage point in UK 10 year bond yields, along with correspondingly dramatic rises in European and US ten year yields.

Equity markets were roiled by the big rise in rates and the early month gains in Western markets were mostly wiped out. Asia also suffered volatility but bond moves were less dramatic and so equities were able to outperform their Western peers.

European gas prices are still soaring, as are UK fuel bills, but actual oil prices are nearly 20% off the highs. The EU is formulating plans to break the relationship between (soaring) gas prices and electricity prices paid by businesses and consumers. The success or otherwise of this plan will be of great importance to the region over the winter months.

The UK was beset by political issues on top of the global economic woes and financial assets suffered accordingly.

Investors are solely focussed on when, and at what level, interest rates will peak and until clarity is found on that issue, financial assets are likely to remain volatile.

We will continue to use such volatility to pick up assets at cheaper prices.

As always September was headlined by the meeting of central bankers at the annual Jackson Hole symposium. Although there was little in the way of new information, Fed Chair Powell reaffirmed the US central bank’s intentions to press ahead with rate hikes to tackle elevated inflation.

It went from bad to worse over August for fixed income investors as bond yields troughed on the first day of the month and proceeded to increasingly price in central bank aggression. By the end of the month, US 2 year yields had risen towards 3.5% and the yield on their UK equivalent breached 3%, the highest level since the 2008 financial crisis.

Despite the relentless climb of bond yields there was some tentative evidence that inflation may have peaked. US Producer and Consumer Price inflation came in lower than economist expectations, as did the less volatile core (inflation excluding food and energy) component. In Europe and Asia it was less clear cut as several measures declined but still came in ahead of forecasts. In the UK, inflation continued to rise, as consumer prices climbed above 10% for the first time in 40 years.

Volatility returned in August and the UK was no exception. The first half of the month saw markets moving optimistically higher on the expectation of Central Banks becoming less concerned about raising interest rates due to the slowing economy and cost of living crisis. However, a sharp selloff occurred in the second half as Central Banks dashed these hopes. UK mid and small sized companies were particularly hard hit, finishing the month more than 5% lower, as political uncertainty compounded the economic concerns above and several influential figures questioned Ms Truss’s intentions to invoke Article 16 of the Northern Ireland Protocol, introduce unfunded government spending and reset the mandates of both the Treasury Department and Bank of England.

All of the above contributed to a decline of 4.5% for Sterling versus the US Dollar, its worst monthly performance since 2016.

In a sign that UK companies at the micro level remain cheap, we saw Microfocus bid for at a price 90% above the value the shares were trading at beforehand.

Hopefully, as actions become clearer, markets can gain some respite after a period of hanging on every word uttered during the leadership campaign. That should offer some comfort to investors.

After a strong recovery in July, Europe struggled with markets down over 5% on a total return basis. Inflation fears are continuing to mount with traders now betting the European Central Bank will raise interest rates by 75 basis points. A minority of policymakers are becoming more willing to follow their US counterparts with higher rate rises.

Wholesale gas prices dropped sharply at the end of the month based on signs that Europe are planning to intervene directly in energy markets. The European Commission have vowed short term intervention as well as a longer term structural reform of the energy market. This long term reform may potentially take the form of a decoupling of gas and electricity prices as is currently being trialled in some parts of Europe.

European equities have now recorded outflows every week since the war in Ukraine began in February, amounting to $73bn in total this year and bets on the market falling (shorts) placed by hedge funds have risen to their highest level since March 2020.

We saw some respite with consumer confidence unexpectedly rising this month. However it remains at extremely low levels. European manufacturing also fell deeper into contractionary territory with output falling at a similar pace to that seen in July.

The economic outlook for Europe continues to look challenging moving forward and share prices have low valuations reflecting such.

The first half of the month saw a continuation of the rally that markets had enjoyed since the middle of June whilst the latter was characterised by a steep fall in share prices following some weak economic data and the Federal Reserve’s annual meeting in Jackson Hole.

Economic data releases in August showed that retail and durable goods sales ground to a halt the previous month whilst several manufacturing surveys came in below expectations. Polls from New York, Kansas and Richmond all painted a gloomy picture of the current manufacturing economy.

Further surveys of private sector activity pointed to worse than expected declines in both services and manufacturing, with the services element contracting for the second month in a row.

Following several months of declining housing data, the sub-par economic prints helped to tilt markets downwards at the end of the month. Central banker commentary did very little to alleviate pressure on markets after several senior policymakers reiterated a commitment to combat inflation. By the end of the month large cap shares were down more than 4%, with the major technology index declining more than 5%.

The region was generally resilient amidst global turbulence, aided specifically by further supportive policy from China and generally less aggressive statements from regional Central Banks when compared to their Western counterparts.

Japan is emerging from its latest wave of Covid and economic numbers there held up better than in China because pandemic related travel restrictions were less onerous.

Whilst a dip in global trade will undoubtedly have some impact on Asia, financial assets will gain some support from the fact the region is closer to ending policy tightening than elsewhere and the inflation problem is nowhere near as acute as Europe or the US.

Oil headed for a third monthly drop, the longest losing run in more than two years, on concerns that the top two oil importers in the world, China and Europe, continue to see worsening economic conditions. The energy crisis in Europe has left much of the region on the verge, if not in the midst, of a recession. In China, growth has slowed due to the continuation of their strict zero-Covid policy, reducing demand for oil. In addition, there is potential for further supply to be added to the market as the prospects of a deal continue to grow in Iran.

Elsewhere, key metals extended their declines, weighed down by the strengthening dollar, rising real yields and another lockdown in China. Gold dropped 0.7%, while silver fell 1.4%.

Signs continue to show that the housing market is losing momentum, with surveyors reporting fewer new buyer enquiries in recent months and the number of mortgage approvals for house purchases falling below pre-pandemic levels. However, Nationwide reports that around 85% of mortgages are fixed rate deals. Therefore, for now, borrowers are relatively shielded from rate increases.

This pessimism is starting to spread to the overall Real Estate market suggesting investors may begin to add to defensive parts of the sector.