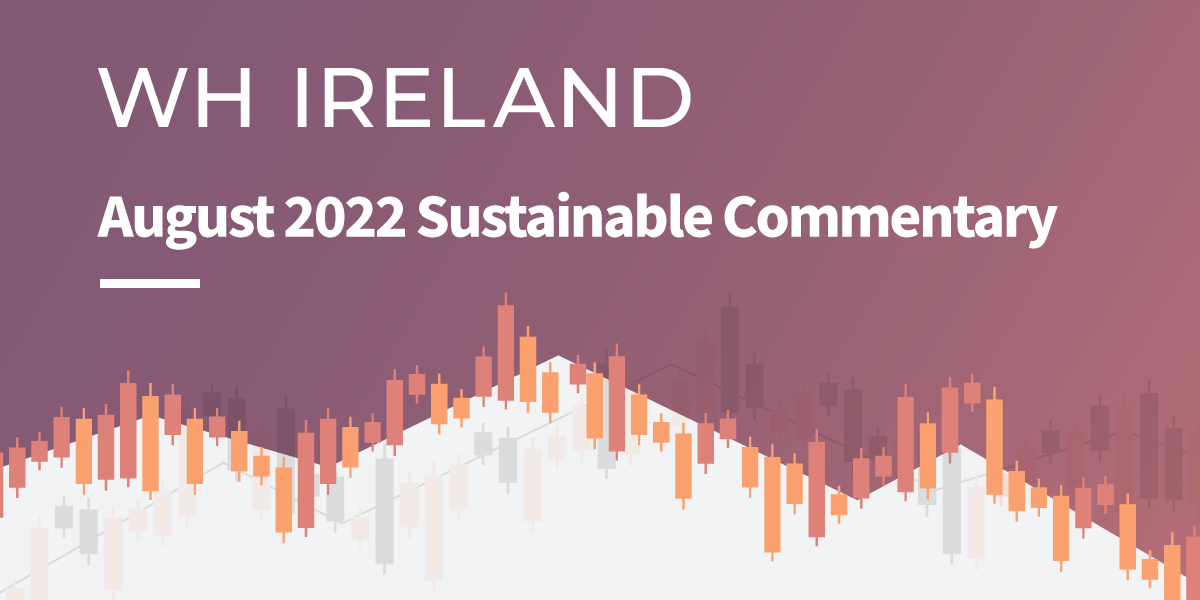 Unfortunately, fears that we would have a continuation of last year’s troubles were realised in the first half. Trends that emerged in 2021 continued to develop and in several instances accelerated or were compounded by the Russian invasion of Ukraine. US 10 year bond yields are around double where they were at the beginning of the year and markets have gone from forecasting only one interest rate hike this year to having done the equivalent of nine before August with more expected to follow.

Much of this is down to inflation, which has remained high and climbed higher still to levels not seen for more than forty years. Covid 19 played its part, curtailing supply chains, then the war in Ukraine exacerbated outstanding issues causing energy prices to soar. The cost of living has pressured consumers and economic data suggests we are in the midst of a slowdown as a result.

Consequently, the first six months of the year were a cruel one for Sustainable investors. They suffered initially from the aftereffects of the Fed’s hawkish pivot in November and then later from fears that inflation had spiralled out of control and taming it would come at the expense of economic growth. Growth and quality growth stocks, which mainly encompass the Sustainable universe have sold off. Elevated starting valuations, rising bond yields, higher input and transport costs and a global slowdown have all weighed on the market.

To add insult to injury, sectors that are largely excluded from the sustainable universe such as energy and materials have been two of the standout performers this year. The extreme divergence in performance between traditional energy and ESG leaders is highlighted below.

Chart 1. At one point mid-way through June the S&P Energy index was around 90% ahead of an index of ESG Leaders

We have been cautious for some time about the threat of rising bond yields and the valuation levels of many growth names, in particular parts of the Sustainable investment universe. For this reason we had been on the lookout for suitable vehicles to diversify the models, either by theme or in asset classes with lower correlations to high growth equities. Within our equity positions we have been keen to avoid being overly exposed to highly valued, speculative growth names.

This has benefitted the portfolios year to date on a relative basis although unsurprisingly they have not been completely immune in absolute terms. The portfolios have both marginally underperformed their IA benchmarks, although when measured against sustainable managed funds or similar comparators they have held up well, as illustrated in the charts below.

Chart 2 & 3. Model portfolio performance Year to Date against IA Benchmark and selected peers from the sector

Over the course of the year the trades we have made have largely been to diversify the models and add defensive ballast. We switched out of Sarasin Food and Agriculture and reduced EdenTree, the former due to a change of management and what we felt was a drift in style towards the more speculative end of the market. They were replaced by additions to defensive funds, Arctic Lifescience and Gravis Clean Energy Income, both of which have delivered positive absolute returns year to date.

Furthermore, we finally found a suitable value offering in the Schroder Sustainable Value fund which has also been a positive contributor to performance.

On a less positive note, our impact funds WHEB Sustainability and Wellington Positive Impact have fallen victim to the sell off this year and are down double digits. Both are heavily growth tilted and the latter exposed to Emerging Markets. We would hope that a more conducive environment for growth in the second half of the year will lead to a rebound in performance.

More recently, we have added the TwentyFour Short Term Sustainable bond. We have been exploring our options in Fixed Income for some time and given the blow out in spreads (yield over US Treasuries) and rise in yield on offer to over 4%, we felt that the risk reward had tilted in favour of adding this fund to models. We will continue to look to further develop the fixed income components of the list over the next 12 months.

Prospects are now looking a little rosier for sustainable investors. This is in part due to the decline in valuations that we have seen over the last 18 months which has taken some of the exuberance out of the market.

The strong outperformance of ESG-linked assets in 2019 and 2020 was characterised by both huge inflows into the sector and exponential re-rating (rise in valuations) of growth stocks, particularly non-profitable growth. Both of these factors have moderated over the last 18 months, implying that some of the speculation has calmed. In May we saw the biggest monthly cash outflow ever from US ESG ETFs (see below), after years of inflows. ESG bond issuance has also slowed this year, with Barclays now expecting zero growth in 2022.

Chart 4. US ESG equity funds had the largest monthly outflow on record in May

Pricing has improved too. Valuations have moderated in the last 18 months to the point where opportunities are beginning to emerge. The chart below from Liontrust shows that, on a price to sales basis, growth stocks have fallen below long term valuation averages.

Chart 5. Growth stocks have fallen in value and are becoming increasingly attractive

However, it is important to avoid tarring the whole universe with the same brush. Although the growth trajectory of Sustainability lends itself to growth names, quality is set to improve as fundamentals become stronger. Furthermore, not all growth is the same, it incorporates several different sectors, not all of which we like as investments at this point. Nonetheless, we believe the outlook for sustainable names is supported by an unwavering commitment to tackle climate and social issues by governments, consumers and investors alike.

Whilst it is by no means new news that spending to address climate issues will be vast, we continue to see progress via increasingly ambitious targets and further real commitments. The sector is no longer reliant on speculative growth forecasts and spending is now coming through which should improve the profitability, quality and cash flow reliability of the investable universe.

Covid 19 and the war in Ukraine have served to accelerate spending on Renewable and Environmental targets. 30% of the EU Recovery fund, passed in response to the Covid crisis, has been earmarked to combat climate change whilst the EU’s RePower plan aims to diversify away from dependence on Russian energy supplies, with Renewable sources being one of the main beneficiaries.

Chart 6 and 7. EU measures to change gas supply and demand by 2030 (left) and historic and forecast EU emissions pathway under the EU Green Deal (right)

Now the sector looks to be at a more reasonable valuation, albeit not yet a compelling one, investors can be more confident of positive returns over time given the constructive outlook for companies in this space.

We are keen to ensure that our list of on-list assets and exposures in models continue to grow and develop alongside the market. As we have noted previously, the market has moved incredibly quickly over the last couple of years as fund groups have scrambled to adapt in the face of burgeoning client demand.

Now however, there are outflows, albeit only for one month, and the industry is facing the inevitable regulatory backlash that comes with rapid growth. Greenwashing (making misleading claims about positive environmental impact) has emerged as a risk to clients with Goldman Sachs set to be investigated and BNY Mellon having already settled with the US regulator within a year of a task force being set up to tackle the issue.

We are conscious of the need to provide a diversified spread of portfolios across the Sustainable investment universe and want to ensure that clients are not vulnerable to any deceptive practises. As such, we regularly meet with fund managers to conduct ongoing due diligence and we are working towards ensuring all funds on our list are SFDR (Sustainable Finance Disclosures Regulation) Article 9 rated, which is the highest standard of Sustainable ratings in the newly launched framework. Inconsistency amongst ratings providers and regulators is not a new issue in the market but we are hopeful that more detailed and stringent measures such as SFDR and the EU Taxonomy should help to improve the standards of best practise in the industry.

A recent academic paper reaffirmed earlier research that suggested companies with higher staff satisfaction created substantial alpha (outperformance) over time and in particular during periods of market stress. This logical but curious phenomenon is depicted in the charts below and has provoked thought about how we can incorporate it into models and ultimately improve client returns over time.

Looking forward, we may begin to consider adding some cyclicality to the portfolios between here and year end. Growth is also beginning to look relatively more attractive from a valuation standpoint so we see a more constructive outlook for Sustainable companies over the next 12 months.

Now that much of the de-rating (decline in valuation) has occurred and investors have begun to withdraw money from ESG strategies, we may have reached a turning point. This change in momentum may be an opportunity for less speculation and more fundamental based growth in sustainable investment.

There remains little doubt about the requirement for funding and the structural growth runway for all of the themes that we are invested in. This should help drive returns over the long run. We have now had a substantial valuation de-rating and a slowdown in rapid inflows that have previously fueled speculation. Notwithstanding another quarter of likely slow growth and market volatility, on a twelve month view we are confident that the outlook is improving.